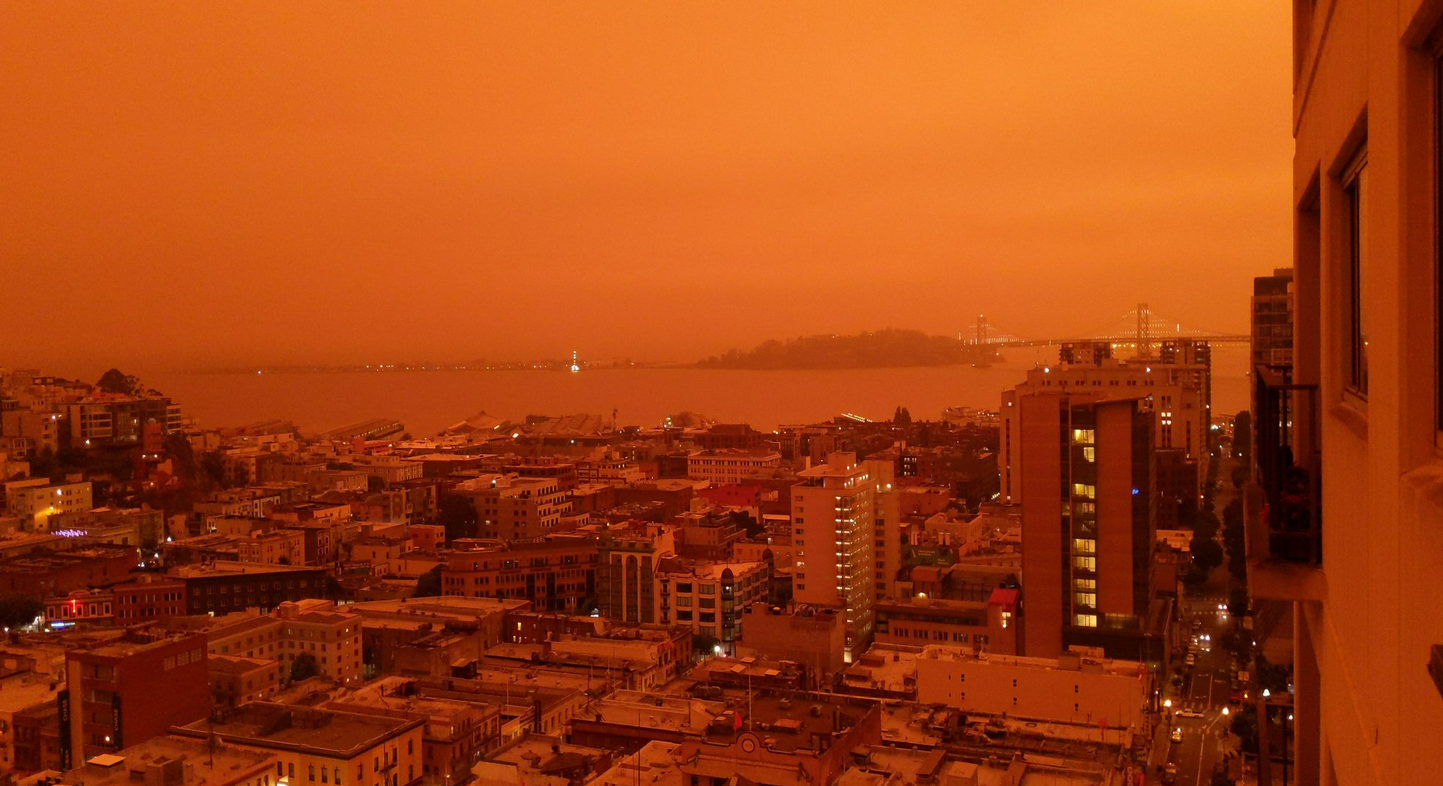 As COVID-19 has dominated headlines with its relentless global spread, other issues have been pushed to the side-lines or largely forgotten in the relentless pandemic-driven news cycle.

But just because it was bumped from the front pages, our climate emergency never went away. And now, it is roaring back with a vengeance.

Large parts of the American West are currently on fire. Hundreds of homes have been destroyed. At least seven people are dead in different states. An unknown number are missing. Tens of thousands remain under evacuation orders.

As I write, there are over 90 wildfires roaring and raging across the western U.S., with California, Oregon, and Washington state all bearing the impact of the fires. But there are more.

As USA Today reported, “wildfires driven by strong winds were racing through more than a dozen Western states Thursday, taking lives, incinerating hundreds of homes and scarring a swath of land almost as big as Connecticut.”

One resident from Butte County in California told the Sacramento Bee that, “the school is gone, the fire department’s gone, the bar’s gone, the laundromat’s gone, the general store’s gone…and I’ll never go back. I never want to see California again.”

In Oregon, Gov. Kate Brown told a press conference that hundreds of homes had been incinerated. “This could be the greatest loss of human life and property due to wildfire in our state’s history,” Brown said.

The climate movement itself hasn’t been immune from impact. A critical local climate justice group in Southern Oregon, Rogue Climate, announced that their offices had been lost to the blaze.

We’re sad to share the news that the Rogue Climate offices, which we shared with the Rogue Action Center, burned down in the recent Almeda/Glendower fires. pic.twitter.com/qbGozjiIxB

This morning, just like yesterday, large parts of California are waking up to choking, smoldering skies. Beautiful endless blue has been replaced by ever present orange and relentless blood red. For residents struggling with the new sky and struggling to breathe, with homes and livelihoods threatened, it is apocalyptically terrifying.

As Guardian columnist and OCI board member, Rebecca Solnit wrote just hours ago: “the sky was the muddy yellow of an old bruise at 7am in San Francisco on Wednesday, and by eight it was a dull orange and the darkness that felt like night was coming on. This morning was perhaps the most unnatural-feeling and unnerving of my life, with darkness rather than daytime rolling in.”

She continued: “In the strange light, the world around us looked ghostly, otherworldly, unnatural, unnerving, disturbing… What is happening now is astonishingly worse than the western fire season ever has been before.”

Clicked the North Bay camera network by accident.. I've never seen all the cameras look like this (some of those grey ones are out of service). South East Bay network much the same.https://t.co/BtPGo9cstG pic.twitter.com/XrtrW5VXU2

For many, the current situation, coupled with coping with the pandemic, is too much to bear. “The West is on fire and there’s nowhere to run,” writes Emma Marris in The Atlantic. “The claustrophobia of this — of fire turning the entire West Coast dim with smoke, on top of the fear, isolation, and long-term lockdown imposed by the pandemic — is almost too much to bear.”

Even those who study climate are overwhelmed by the situation.

University of California climate scientist Daniel Swain, tweeted yesterday, “everyone is so far beyond capacity right now, and there so much else going on, that I don’t don’t think the collective bandwidth exists right now to process what it happening.”

He is not alone. “What’s remarkable is that there’s so many fires,” Chris Field, who directs the Stanford Woods Institute for the Environment, told the Guardian. “Even as someone whose job is to understand what’s happening, it’s really hard to keep up.”

“I’m kind of at a loss for words right now,” Neil Lareau, an expert on fire behavior at the University of Nevada at Reno also told the Washington Post. “I can’t keep up with the number of extremes and unprecedented circumstances that have developed with this.”

For the experts, this is climate change in action. John Abatzoglou, an expert on fires and climate at the University of California at Merced, was quoted by the Post, saying, “there’s very little doubt that the card that we’ve drawn in terms of climate set the table in terms of what we’re seeing play out this year. And we’ve seen more and more years like this, partially as a result of ­human-caused climate change.”

But despite tens of millions of people being affected right now by our climate emergency, policy makers are still not acting with commensurate urgency.

Yesterday, an advisory panel to a U.S. market regulator concluded that wildfires such as those sweeping the western U.S. could ignite a financial crisis.

The Commodity Futures Trading Commission’s Climate-Related Market Risk Subcommittee of the Market Risk Advisory Committee (MRAC) released a report entitled Managing Climate Risk in the U.S. Financial System, which warned that “climate change poses a major risk to the stability of the U.S. financial system and to its ability to sustain the American economy.”

The report’s publication must be welcomed as a positive step given the Trump Administration’s assault on climate science. As the New York Times notes these “observations are not entirely new… Perhaps most notable is that it is being published at all.”

But words are no longer enough. As my colleague, Collin Rees, Senior Analyst with Oil Change International, noted yesterday, “the CFTC’s report is welcomed, but what comes next is far more important. Western states are literally burning up as this report is released. Its recommendations are minimal; adopting them and going much further must be a priority of the next administration.”

“Comprehensive climate policy must include regulating the financial system, and it’s critical that the people in charge of Joe Biden’s policy aren’t Wall Street and BlackRock insiders who’ve been driving the climate crisis for decades,” Rees continued.

We have to act now. Large parts of the U.S. are on fire, but things are going to get worse if we do not act.

Researchers from the University of Melbourne in Australia have estimated how much climate inaction will cost the global economy. They believe climate change will make global average GDP fall by 7.2 per cent each year by 2100 or over USD 600 trillion.

And for anyone hoping that the global economic slowdown due to the pandemic would have significantly helped somehow diminish the climate crisis, they are going to be disappointed.

Yesterday, the World Meteorological Organization and other leading scientific organizations, issued a report stating that “climate change has not stopped for COVID-19. Greenhouse gas concentrations in the atmosphere are at record levels and continue to increase.”

They added, “the world is set to see its warmest five years on record — in a trend which is likely to continue — and is not on track to meet agreed targets to keep global temperature increase well below 2°C or at 1.5°C above pre-industrial levels.”

Prof Petteri Taalas, Secretary-General of the World Meteorological Organization said, “whilst many aspects of our lives have been disrupted in 2020, climate change has continued unabated.”