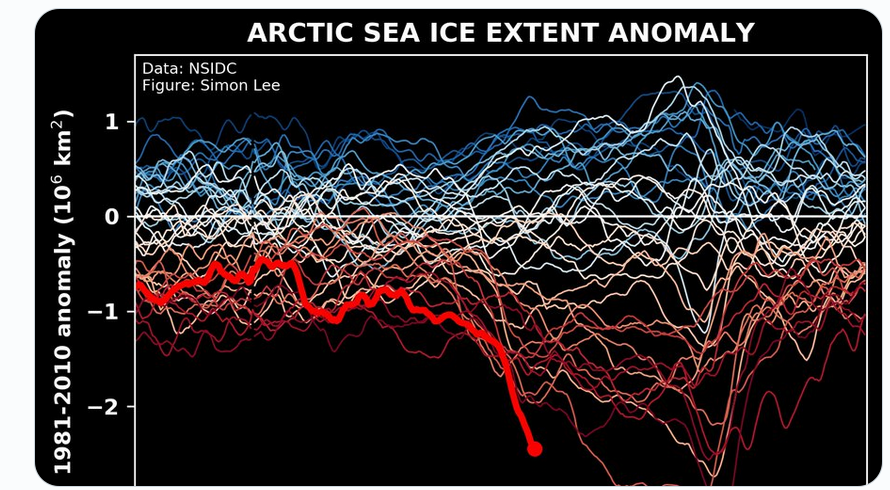 2020 is continuing to bring deeply worrying climate news from both the Arctic and the Antarctic.

First the Arctic, where our climate emergency is playing out in real time, with devastating consequences.

I have already blogged recently that the region has quite literally, been on fire, and has been experiencing record temperatures and unprecedented fires.

But every day brings new horrors and new insights into how our climate emergency is driving the extreme weather.

Scientists from France, Germany, Netherlands, Russia, Switzerland, and the UK have been collaborating to examine whether and to what extent human-induced climate change has been causing the Arctic heatwave to intensity and become more likely.

The scientists conclusions are damning: They said, “the January to June 2020 prolonged heat was made at least 600 times more likely as a result of human-induced climate change.”

They warned that the region, which is warming at least three times faster than the rest of the world, could experience a worse case scenario of seven degrees of warming by 2050.

They added, “by 2050 the Siberian region could expect to have temperatures increase by at least 2.5 degrees compared to 1900, but this increase could be as high as 7 degrees.”

If this happens, the region as we know it will be no more, with a spiraling chaos of extreme heat, fires, methane releases, and the decimation of iconic species.

Walt Meier, a senior research scientist at the National Snow and Ice Data Center, told the site, “right now it’s quite extreme.” He is not the only one worried. Meteorologist Simon Lee tweeted:

The unprecedented disappearance of sea ice in the Arctic this summer is a mind-blowing manifestation of the changes we are causing to Earth's climate. pic.twitter.com/NZmcCt5wlZ

The loss of sea ice is having a devastating impact on polar bears, who use it to hunt for seals.

A new study, published in Nature Climate Change, warns that under a business as usual scenario, polar bears could nearly be extinct by the end of the century, now only present in the Queen Elizabeth Islands, the northernmost cluster in Canada’s Arctic.

“It’s been clear for some time that polar bears are going to suffer under climate change,” Péter Molnár, a biologist at the University of Toronto, and lead author of the study, told the Guardian. “Even if we mitigate emissions, we are still going to see some subpopulations go extinct before the end of the century.”

The news from the South Pole, Antarctica, is equally depressing, with scientists discovering active leaks of methane, the most potent greenhouse gas, from the sea floor. This is deeply troubling as Antarctica is estimated to contain as much as a quarter of earth’s marine methane reserves. If this escapes into the atmosphere it could seriously worsen our climate emergency.

Andrew Thurber, from Oregon State University, who led the research published in the journal Proceedings of the Royal Society B, said “It is not good news…The methane cycle is absolutely something that we as a society need to be concerned about. I find it incredibly concerning.”

We all need to be worried. As the Independent added about the research, “as the climate crisis means ice shelves retreat, the release of methane from subsurface marine reservoirs is expected to become increasingly common.”