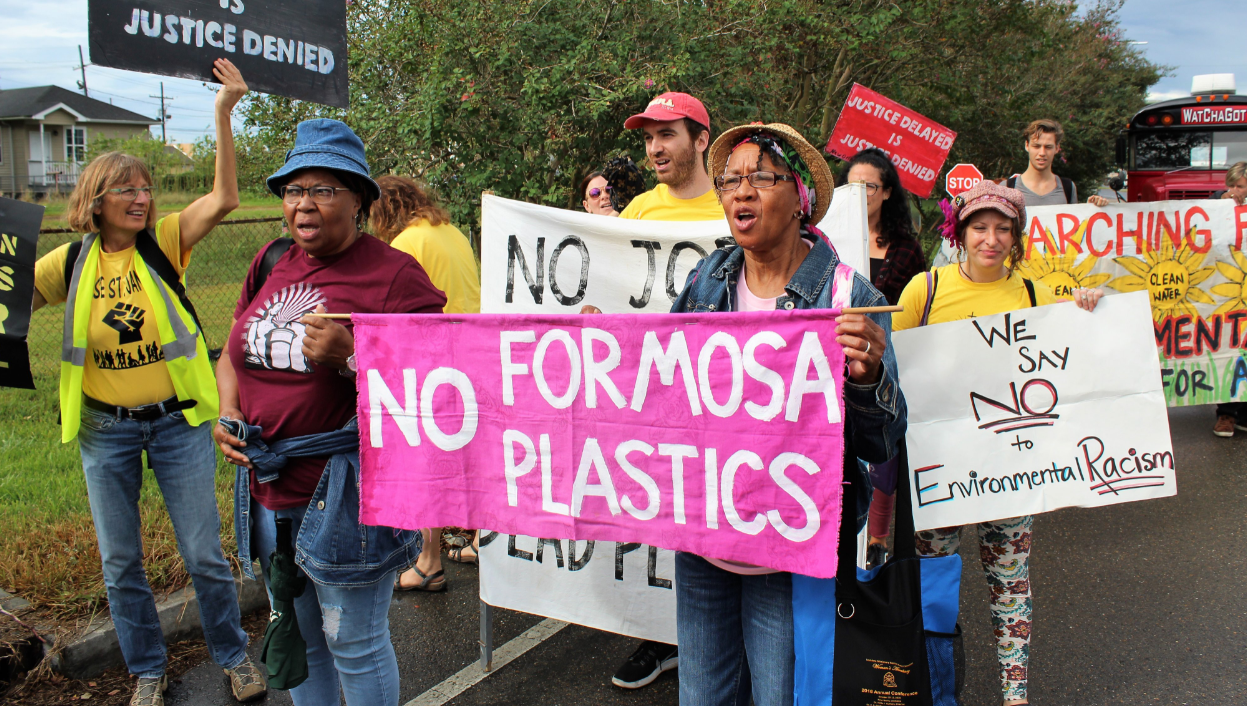 For decades, those on the frontline of the environmental justice struggle have faced legal intimidation and harassment for speaking out against chronic pollution in “Cancer Alley,” an 85-mile stretch of oil, gas, and petrochemical facilities along the Mississippi River between Baton Rouge and New Orleans, Louisiana.

One such group on the frontline is the Louisiana Bucket Brigade (LABB), which has been celebrating its twentieth year of operation this year.

LABB was formed back in 2000 to support so-called “fence-line” communities in the state, those that are located next to refineries, dumps, or chemical plants, where reisdents have to breathe toxic air that is pumped day in, day out.

Like many of us, LABB was inspired by activists fighting the oil industry in the Niger Delta region. One of the founders of the organization, Anne Rolfes used to work in Benin, West Africa, documenting the stories of Nigerians who had become refugees due to their work in the oil industry.

Anne and her colleagues are used to being in what can be a hostile environment when fighting the oil industry on its dirty doorstep, from Benin to Baton Rouge.

But in one of the most ridiculous, draconian, and downright dangerous legal precedents, last Thursday, Anna and her colleague Kate McIntosh were bonded out of jail after being arrested on terrorism charges.

So what had they done to deserve a felony terrorism charge and potentially face years in prison?

Over six months ago, in December, they left a highly symbolic sealed box containing plastic pellet waste on the doorstep of a local oil and gas lobbyist to highlight the issue of chronic pollution in the region, which is home to some of the most impoverished and vulnerable communities in the United States.

The two had left a box of what are known locally as nurdles — small plastic pellets — which they had collected from the Texas plastic manufacturer, Formosa Plastics. Formosa had just settled with the state of Texas for USD 50 million, for dumping millions of nurdles into the local polluted waterways.

Inside was a simple note: “These are just some of the billions of nurdles that Formosa Plastics dumped into the coastal waters of the state of Texas. These were used as evidence in a landmark lawsuit filed against Formosa under the Clean Water Act.” The note also said the pellets should be recycled properly.

The boxes had been delivered to doorsteps of several local oil and gas executives a day after “Nurdlefest 2019.” The event had been staged by LABB and the local community on the eve of a crucial decision by the Louisiana Department of Environmental Quality (LDEQ) over whether to grant Formosa Plastics a new air quality permit.

The permit was to expand Formosa’s operations by building a new massive plastic-manufacturing complex in St. James Parish — a mostly black, rural community.

The Facebook page for the Nurdlefest 2019 event had warned that “residents in Cancer Alley cannot endure another polluting plant, and neither can our coastline. If LDEQ approves the permits, Formosa’s plant would emit 800 tons of toxic air pollutants and 13 million tons of greenhouse gases every year.”

Formosa is not a good neighbor. It is a company with history of fines and pollution. ProPublica found that the new plant’s emissions will more than triple residents’ exposure to cancer-causing chemicals.

Moreover, the permit was granted despite the fact that ten years before Formosa had been fined USD 13 million for air and water quality violations.

The company has a pattern of bad behavior: According to the website set up by local communities against the plant: “Formosa, a multi-billion-dollar Taiwanese corporation, has damaged communities and ecosystems around the world. From Illinois to Vietnam to Texas, incidents at company facilities have killed people, poisoned waterways, and left a trail of plastic pellets.”

The timing of the charges are insidious. They come as the majority Black residents are already struggling with a COVID-19 death rate five times higher than the national average in the U.S.

There has been total outrage to the terrorism charges.

Pam Spees, an attorney with the Center for Constitutional Rights, who is representing the women, told the local media the charges had “zero legal merit.” Spees added: “They do not even pass the laugh test. We ask the district attorney to look carefully at these arrests and reject the charges against these two dedicated advocates as soon as possible.”

She said the charges were essentially politically motivated and designed to “discourage protesters.”

In that sense they are SLAPPs — Strategic Lawsuits Against Public Participation. We know legal intimidation is getting worse in the US.

Indeed, as Earther points out: “In the past four years, 21 states have introduced criminal penalties for demonstrating near oil and gas infrastructure with many of those laws mirroring text drafted by the industry-backed American Legislative Exchange Council. In 2019, the federal government proposed legislation that would prescribe up to two decades in prison for ‘inhibiting the operation’ of pipelines — or even just ‘conspiring’ to do so. But even by those standards, these charges seem utterly gratuitous.”

Furthermore, in response to the charges, over forty advocacy groups, representing millions of individuals, all released statements in solidarity with Anne Rolfes and Kate McIntosh.

Sharon Lavigne, a member of the newly formed Alliance to Defend Democracy, said: “We will not stand by as law enforcement and a toxic chemical company from Taiwan attempt to scare, silence, and intimidate us. We will not be silent.”

Corinne Van Dalen, Earthjustice staff attorney, said: “These arrests are a despicable attempt to silence those who are fighting for the health of Black Louisianians who would be forced to breathe toxic air from yet another chemical plant that industry and the state have actively promoted for their community.”

Pastor Gregory Manning, a member of the Greater New Orleans Interfaith Climate Coalition and a member of the Alliance, added: “I consider this retaliatory attack on the victims of environmental racism and their allies to be immoral and unethical … The charges brought against our allies are manipulative and fabricated and should be immediately dismissed.”