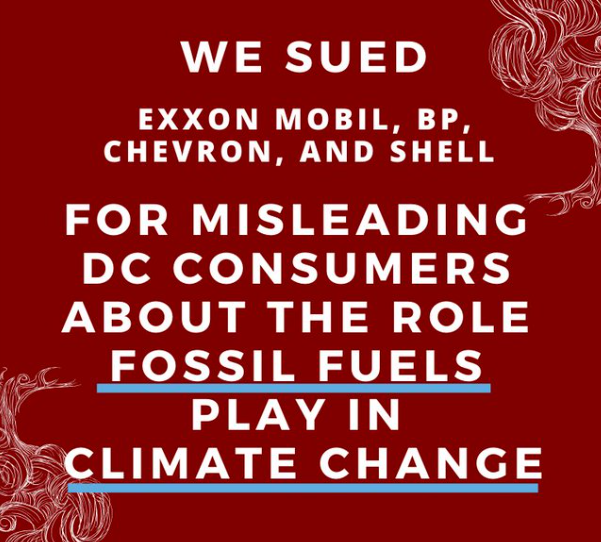 Big Oil’s decades-old campaign to deny, deceive, and delay action on climate change has been thrust into the spotlight again after both Attorney Generals for Minnesota and the District of Columbia (D.C.) launched legal action against the industry within twenty-four hours of each other.

D.C. and Minnesota now join other cities, including New York City, and states, such as Massachusetts in targeting oil companies, their funders, and spin doctors for their decades long denial campaign, in the scandal that is summarized by the hashtag: #ExxonKnew.

The 84 page document did not mince its words, arguing, “that the economic devastation and public-health impacts from climate change” in Minnesota “were caused, in large part, by a campaign of deception that Defendants orchestrated and executed with disturbing success.”

Dating back decades, instead of warning Minnesota about the risks of climate change, the “Defendants realized massive profits through largely unabated and expanded extraction, production, promotion, marketing, and sale of their fossil-fuel products.”

The suit cited scientific evidence dating back to the fifties and sixties. “By 1965, Defendants and their predecessors-in-interest were aware that the scientific community had found that fossil-fuel products, if used profligately, would cause global warming by the end of the century, and that such global warming would have wide-ranging and costly consequences,” the suit said.

Instead of acting responsibly, the companies repeated the playbook of the tobacco industry and funded “fraudulent scientific research” in order to create uncertainty.

And instead of acting in the public interest, and investing in alternatives to fossil fuels, the Defendants just carried on drilling for oil and gas, making extreme profits.

The suit notes that, for example, ExxonMobil earned approximately USD 775 billion in profits during this period. And by 2017, while the foundations they funded were denying legitimate climate science, Charles and David Koch of Koch Industries, Inc., were worth a combined USD 84 billion.”

As Exxon accumulated wealth by drilling well after well, “Minnesota and Minnesotans suffered the devastating effects of climate change.”

“If Defendants had not misled the public to pad their own pockets, Minnesota would not have already incurred such large costs because of climate change and would not be facing such dramatic future costs.”

Finally, the legal action “seeks to hold Defendants accountable for deliberately undermining the science of climate change, purposefully downplaying the role that the purchase and consumption of their products played in causing climate change and the potentially catastrophic consequences of climate change, and for failing to fully inform the consumers and the public of their understanding that without swift action, it would be too late to ward off the devastation.”

Then today, the District of Columbia launched legal action against ExxonMobil, Chevron, BP, and Shell.

The suit was filed by District Attorney General, Karl Racine, who alleges in a statement that that the companies “systematically and intentionally misled consumers in Washington, DC … about the central role their products play in causing climate change.”

Just like the Minnesota action, it similarly accused the companies of knowing about climate change in the 1950s and sixties but then leading a disinformation campaign to deny the evidence and delay action.

It adds: “Along with these industry associations and front groups, the companies choreographed a public relations effort modeled on Big Tobacco’s denial of tobacco’s harm, while privately investing in projects to protect existing fossil fuel infrastructure from the impacts of climate change.

“As the public learned that defendants knew of their products’ role in causing climate change, the companies pivoted to misleading the public about their investments in sustainable energy and transition from fossil fuels.”

Racine added in his statement that “for decades, these oil and gas companies spent millions to mislead consumers and discredit climate science in pursuit of profits. The defendants violated the District’s consumer protection law by concealing the fact that using fossil fuels threatens the health of District residents and the environment.”

He ended by saying the suit had been filed to “end these disinformation campaigns and to hold these companies accountable for their deceptive practices.”

Copies of the complaints are here and here.