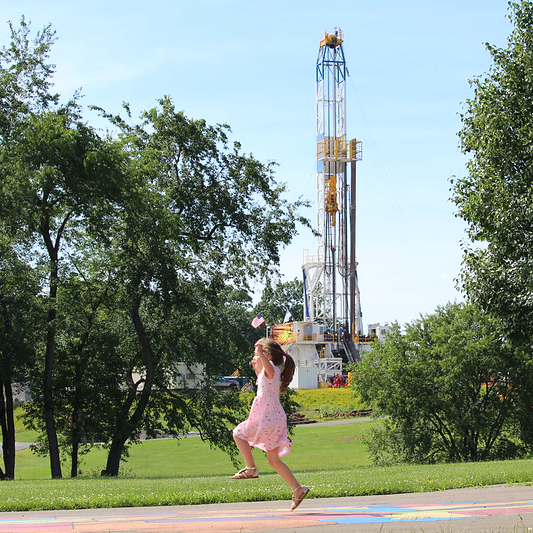 Oil crash hits Nigeria hard
Africa’s most populous nation is getting almost no money from selling oil now. While Brent crude futures have risen back above USD 30 per barrel, Nigerian oil is still fetching only around USD 20. PwC warn that Nigeria could receive almost nil oil revenue for five years or more. About a quarter of Nigeria’s crude oil cargoes for loading this month still have no buyers.

The Nigerian government’s dependence on oil revenues could lead to real risks for Nigerian people and communities, some of whom have been resisting oil expansion for decades.

Australian state opens 7,000 sq km for gas and coal exploration
The state government in Queensland has opened two new areas of land for immediate gas and coal exploration and tenders, and will put up another 6,700 sq km of land for tender later this month. Some land opened up for exploration is currently farmed for food. Even in this moment of crisis, Mines minister Dr Anthony Lynham is still betting on a long-term market for new gas production – at odds with the ambition of the Paris Agreement.

The Lock the Gate Alliance is resisting this fossil fuel expansion, calling instead for investment in rural communities.

Pemex suffers USD 23 bn quarterly loss, keeps pushing output growth
As others slash production and investment, Mexico’s state oil company, Pemex, is continuing to push output, vowing to nearly double refining output in May – even though “not a single field in Pemex’s portfolio … is profitable when you consider costs and taxes…”

Canadian government commits up to CAD 500M to Coastal GasLink pipeline
Canada’s export credit agency, Export Development Canada (EDC), is doubling down on more public finance for oil and gas expansion. EDC revealed on Monday that it will lend up to CAD 500 million to TC Energy to help the company construct the Coastal GasLink pipeline. Na’Moks, a hereditary chief in the Wet’suwet’en First Nation – which continues to resist the pipeline – responded that, “It doesn’t make sense to me to put money into something that is bound to fail because the opposition to this is so high.”

Totally unacceptable: Shareholders not persuaded by Total’s new target
Total has announced a new Europe-only net zero target, in a climate plan riddled with “vague targets with a lot of loopholes”. Last month, 11 institutional investors requested a shareholder resolution, calling for detailed plans and absolute targets, not relative measures like carbon intensity. ShareAction have labelled the new promises “totally insincere”. The shareholder resolution will be considered an AGM scheduled for May 29, 2020.

EU regulators propose ‘ludicrous’ oil and gas loophole in draft disclosure rules
In the latest draft rules for the EU’s sustainable disclosure regime, regulators have proposed omitting oil and gas from the definition of fossil fuels. The rules are supposed to improve transparency on the environmental, social, and governance risks of investment funds. Investors, politicians, and campaigners are pushing back against this “ludicrous” loophole.

However, as recently as March this year, Buffett said that free oil would be good for consumers.

European court rules against Shannon LNG terminal in Ireland
Irish activists are celebrating a ruling from the European Court of Justice finding that planning permission for the proposed Shannon LNG terminal has expired, and should never have been extended without a proper environmental impact assessment. Friends of the Irish Environment brought the legal challenge against the EUR 500 million project.

U.S. company pulls back on Permian export pipeline plan
MPLX, a subsidiary of Marathon Petroleum, announced this week it is no longer pursuing a proposed 400-mile pipeline to export natural gas liquids from the Permian Basin through the Gulf Coast of Texas. The company has also deferred plans for a related fractionation and export facility.

After the oil crash, we need a managed wind-down of fossil fuel production
Cleo Verkuijl of the Stockholm Environment Institute, Ivetta Gerasimchuk of the International Institute for Sustainable Development, and Niklas Hagelberg of the UN Environment Programme preview the timely focus of this year’s Production Gap Report: “how government bailouts, stimulus measures and strategies are delaying – or accelerating – the transition away from dependence on fossil fuel production.”

Op-ed: It’s time for a fossil fuel non-proliferation treaty
“History teaches us rapid, dramatic transformation is possible when a handful of countries committed to high ambition decide to lead,” writes Tzeporah Berman in a Thompson Reuters op-ed. Instead of going back to “normal,” it’s time now for governments to agree to a global framework for an equitable wind down of fossil fuels.

This Pandemic Proves It: Individual actions alone won’t solve the climate crisis
“The COVID-19 pandemic shows more clearly than ever that individual action to tackle the climate crisis will never be enough without a parallel systemic change focused on emissions reductions,” Amy Westervelt writes in the Huffington Post. Without strong government intervention, “fossil fuel companies will find ways to stay in the carbon business as long as they possibly can.”

Was 2019 the peak of the fossil fuel era?
Kingsmill Bond of Carbon Tracker Initiative analyses the possibility of peak fossil fuel demand and issues this warning governments: “You may be certain that if you try to [build back the fossil fuel system], the companies at the top end of the cost curve will dump their assets on the taxpayer, and you will have to pay to clean them up and close them down.”