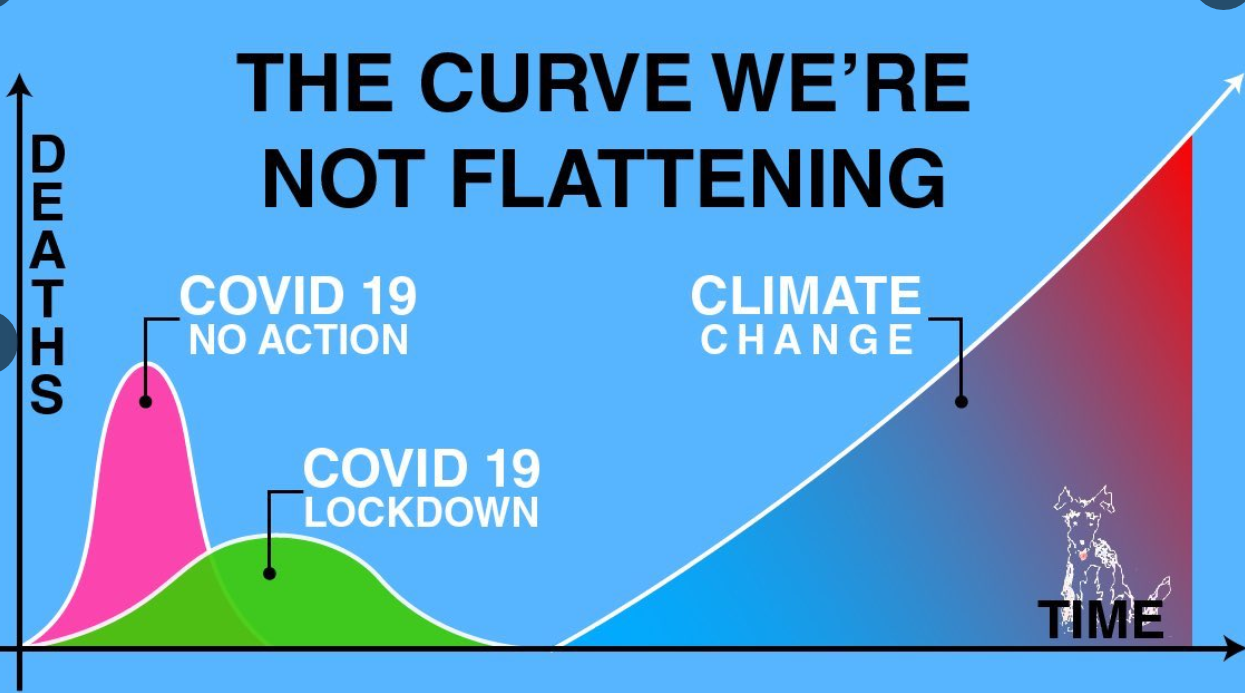 Amidst the COVID-19 Pandemic, it is easy to forget we are in a climate emergency. CO2 levels continue to rise, and the predictions if we do not act are as bad as they were before the pandemic.

Although COVID-19 continues to make the headlines, climate science is also scary. First, we start with the numbers. As meteorologist Eric Holthaus tweeted earlier this week:

As of Friday, the Earth has set a new record for CO2 in the atmosphere: 418 ppm.

This is the highest level in at least 800,000 years, using data from ice cores in Antarctica.

Second, are the predictions. Just yesterday, scientists predicted that over 3 billion people could live in “near unlivable” heat by 2070 if we do not reduce carbon emissions. Co-author of the study, Professor Tim Lenton, told the BBC: “The study hopefully puts climate change in more human terms.”

And today, the Intergovernmental Science-Policy Platform on Biodiversity and Ecosystem Services, predicted that if we do not change course, one million animal and plant species are now threatened with extinction.

These dire warnings are nothing new. For decades climate campaigners, activists, scientists, and frontline communities have been arguing that we need to radically act.

For decades the fossil fuel industry has responded with one of the most sophisticated PR strategies, akin only to Big Tobacco. That PR strategy: one of denial and delay, was spectacularly followed, as oil companies poured tens of millions into groups to deny the science and argue for delayed action.

Seasoned climate “denier-watchers” will tell you that the strategy never stayed static, that it moved over time: first it was deny, then delay, and then came the argument that it was too late to do anything about climate change — another D: Dominate.

Big Oil may be belatedly saying it wants to join the fight for climate action, but it wants to dominate the policy response to that action with vague, flawed promises of being carbon neutral by 2050. It speaks with a forked tongue as in many ways it continues the status quo that hurtles us towards extreme heat and climate chaos.

The argument that is was too late to do anything regarding climate and now all we can do is adapt to extreme weather and rising seas, has been blown out water forever by the COVID-19 pandemic. The pandemic has shown that governments, where and when necessary, can act and act fast.

As the writer Kim Stanley Robinson so articulately says in New Yorker magazine: “What felt impossible has become thinkable. The spring of 2020 is suggestive of how much, and how quickly, we can change as a civilization.”

There are already positive signs. Earlier today, in Australia a summit was held towards a “Renewables-Led Economic Recovery.” Innes Willox, chief executive of the Australian Industry Group, representing more than 60,000 businesses, told the Guardian: “There’s a lot that we can do to rebuild stronger and cleaner. The need is urgent. COVID-19 and climate are bigger than any economic challenge we’ve faced in the last century.”

Meanwhile, in the UK, the Government’s formal advisors on climate, the Committee on Climate Change, have warned that it must avoid staggering from the COVID-19 crisis into “a deeper climate crisis.”

The only way we will avoid a deeper climate crisis will be by massive structural changes and an end to the fossil fuel age. There will be those who argue that a few more people working from home, a few less people flying or eating meat after the pandemic will mean the worst can be avoided as we go back to essentially what was before.

But they would be fundamentally mistaken. And here is why. Hundreds of millions of us may have stopped flying, commuting, driving and are now working from home. Many businesses are shut too.

But as Grist reports “Even with the global economy at a near-standstill, the best analysis suggests that the world is still on track to release 95 percent of the carbon dioxide emitted in a typical year, continuing to heat up the planet and driving climate change even as we’re stuck at home.”

This year due to the pandemic CO2 emissions might reduce about 5.5 percent, but they need to continue to decline by 7.6 percent yearly to have any change of keeping warming to 1.5 degrees.

Gavin Schmidt, a climatologist and the director of the NASA Goddard Institute for Space Studies in New York City told Grist: “I think the main issue is that people focus way, way too much on people’s personal footprints, and whether they fly or not, without really dealing with the structural things that really cause carbon dioxide levels to go up.”

Post pandemic we may all fly less, drive less, consume less, but it will not be enough.

To fight the COVID-19 pandemic, countries have been flattening the curve, the so-called spike in infections. We now have to flatten the climate curve too, the ever growing spike in carbon dioxide.

But to do so, we need to stop subsidizing the fossil fuel industry and decarbonize our whole economy. We need a just transition into renewables that protects workers and jobs. And we need to do with the fast momentum that many governments responded to the COVID-19 pandemic.

Maybe unlike any time in recent history how we behave in the next few months will define how future generations see this one. We cannot lurch from one crisis to the next. We cannot idly jump from the frying pan into the fire.