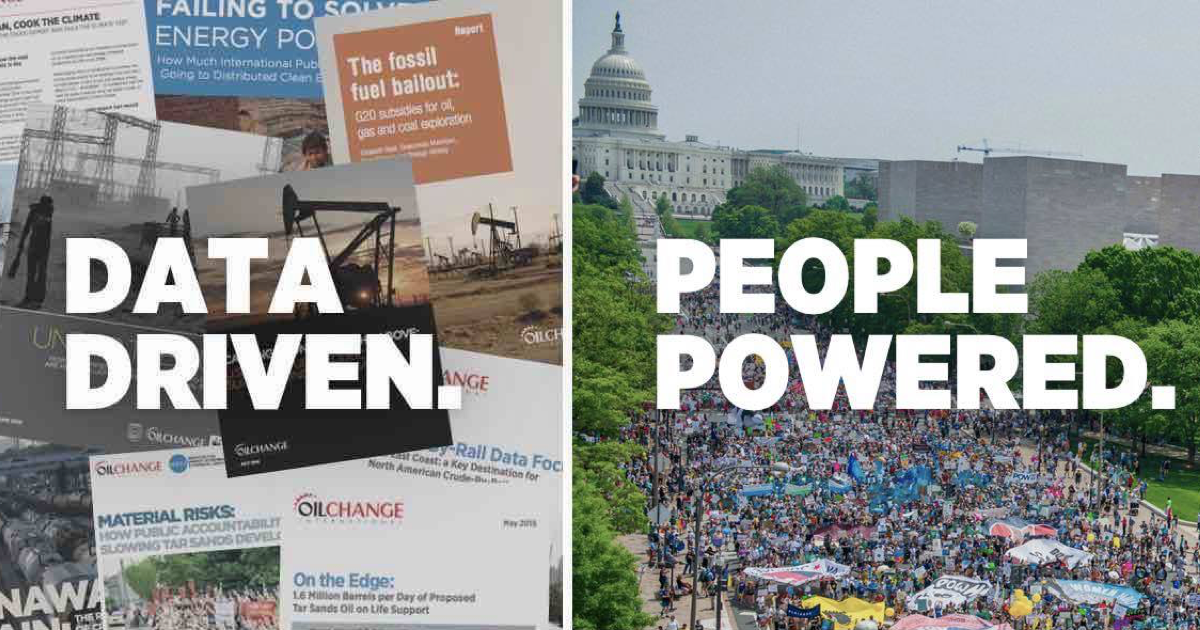 I don’t want to be accused of burying the lead, so, FYI, today I’m officially announcing that I’ve stepped down as Executive Director of Oil Change International.

More about that in a moment, but first, can we talk about this organization that I founded fifteen years ago?

OCI has gone from a small start-up group to one of the key organizations in the global energy and climate ecosystem. Our analysis is widely quoted and used not only in the press and movement circles, but also in boardrooms, legislative chambers, policy shops, academia, and courtrooms.

Our research has become foundational for activists around the world in fights against taxpayer handouts to the industry, new fossil fuel infrastructure, and demands for a just transition and managed phase-out of oil and gas production.

Of course, none of us foresaw the way in which a global pandemic and an oil price war would turn all of our lives upside down and ultimately reveal the naked truth about the fossil fuel industry: It’s a morally bankrupt industry that cares more about profits than human life and requires billions of our taxpayer dollars to prop up.

Here’s the thing though – OCI was built for this moment. Fifteen years ago we were talking about the need for a separation of oil and state, and the need for governments to stop supporting this industry that was driving the climate crisis, war, inequality, and poverty around the world.

Today, we’re more inclined to believe that the best policy solution in countries like the United States might even be the acquisition of oil by state, but the fundamental strategy that remains central to our work is that we must demand our governments place the interests of people over those who profit off of pollution.

Unlike fifteen years ago, today we have mountains of data and millions of allies and supporters. The data drives us and others to clear conclusions and strong policy demands, but amplifying the voices of the people is where our power comes from. This data driven and people powered approach allows us to be clear about what governments should – and shouldn’t – be doing in response to this crisis, and those to come.

Ask yourself, is it really radical and unrealistic to demand that the industry most responsible for the climate crisis stop expansion immediately and begin a decades long phase-out?

No, no it is not. We have been making this point for a while now, and we will continue to do so.

To me, Oil Change exists to expose the true human and environmental costs of this industry, to hold the people who’ve profited from it accountable, and ultimately to dismantle it, for all time. To expose the racism and structural inequality propping up this industry and the risks inherent in corporate globalization more broadly. To hold the uncomfortable truth that carbon is not the only problem with our economic and political systems as the elite and powerful debate climate “solutions.” To advance policies and messages that build our collective power to confront the fossil fuel industry. To do it all non-violently, courageously, powerfully, and skillfully. To empower and inspire resistance, and to win.

Together, we have a historic opportunity to accelerate the transition to clean energy and to end the expansion of fossil fuels. As this window opens wider, and our opportunities grow, our organization will continue to rise to the occasion. OCI was built for this moment, and ultimately, it was built to thrive beyond my tenure as Executive Director.

Our Board of Directors has known for more than a year that I was ready to step down and move on. They have chosen Elizabeth Bast as the next Executive Director of OCI. Elizabeth has been our Managing Director for the last ten years and in that role she has expertly guided the organization to a decade of ongoing organizational growth. She has also ensured that we worked hand in hand with our partners in the Global South, many of whom she’s worked with personally for years. She’ll be a fantastic Executive Director, which I know for sure because in many ways she has been doing the job for years.

I am immensely proud of the work that OCI does and of the organization it has become. Enabling it all is an exceptional, hard-working, passionate, incredibly lean, experienced staff of only twenty. We need your support to be sure this incredible team is enabled to do their best work and to continue to grow to meet the challenges ahead.

It has been a privilege and a pleasure to lead this organization out of my basement (literally) and into the world. Now, from my basement again, I want to thank each of you for your own efforts, and thanks for supporting me and giving me the opportunity to create, nurture, and lead this unique, powerful, and vital institution.

P.S. If you know me, you know I’m not likely to stop working on these issues. I am determined to take some time to heal, rest, and think about options moving forward. To follow along as I figure it out and inevitably rant against the latest example of oil industry greed, I invite you to follow me on twitter: @Kretzmann.