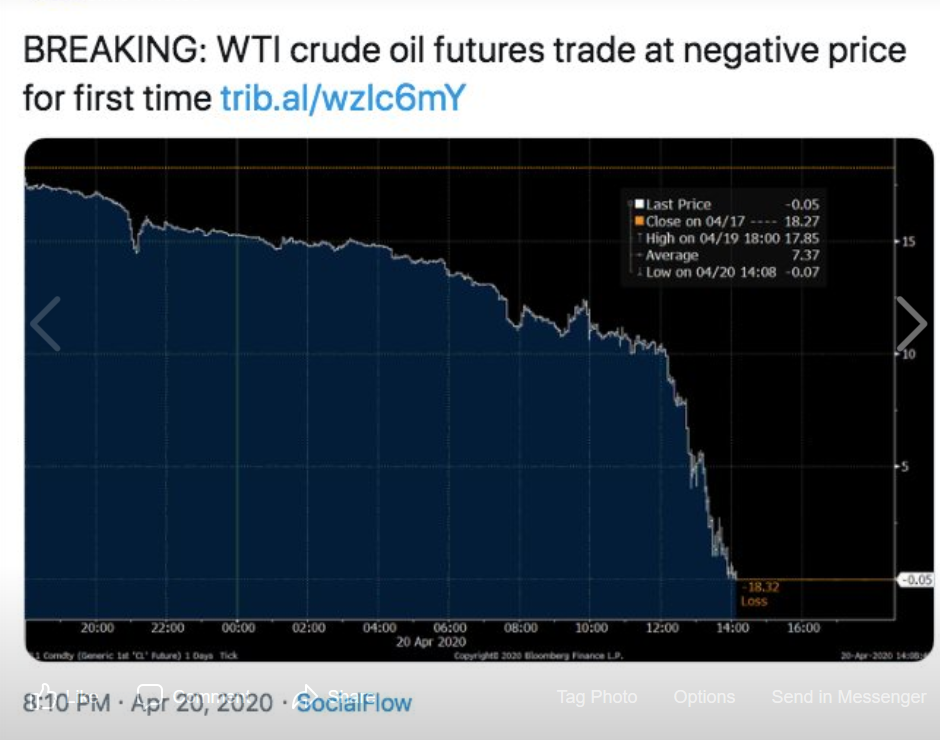 An unprecedented and volatile week for the oil price saw it slightly climb on Wednesday after President Donald Trump heightened international tensions by ordering US warships to “shoot down and destroy” Iranian vessels in the Gulf.

One simple tweet from the President was enough to rebound the price of oil from historic lows: the price of Brent Crude crawled back over $20 a barrel and the US benchmark, West Texas Intermediate, rose 25 per cent to $14.43.

Earlier in the week, history was made when the oil futures market price went negative for the first time ever as a result of global storage facilities running out of space, and a collapsed demand due to the COVID-19 Pandemic.

As traders scrambled to sell oil no one wanted as there is nowhere to store it, a combination of traders, analysts and journalists were stunned at the volatility of the situation and how oil had been left essentially worthless.

The dramatic – unprecedented – events were summarized dramatically by the New York Times: “Something bizarre happened in the oil markets on Monday: Prices fell so much that some traders paid buyers to take oil off their hands.”

The Times continued: “The price of the main U.S. oil benchmark fell more than $50 a barrel to end the day about $30 below zero, the first time oil prices have ever turned negative. Such an eye-popping slide is the result of a quirk in the oil market, but it underscores the industry’s disarray as the coronavirus pandemic decimates the world economy.”

They were not the only ones astounded and astonished at events: On a call with journalists, Fatih Birol, the head of the International Energy Agency (IEA), said: “In a few years’ time, when we look back on 2020, we may well see that it was the worst year in the history of global oil markets. April may well have been the worst month. It may go down as Black April in the history of the oil industry.”

Stewart Glickman, an energy equity analyst at CFRA Research told the BBC: “This is off-the-charts wacky. The demand shock was so massive that it’s overwhelmed anything that people could have expected.”

“The basic model is in pieces, it’s fallen apart,” Tom Sanzillo, director of finance at the Institute for Energy Economics and Financial Analysis (IEEFA) told Time Magazine. “This is an industry in last place.”

The LA Times called the collapse “stunning”, the Independent saw the price collapse as “jaw-dropping”. Bloomberg added: “Either the pandemic or the price war by itself would have rocked the energy markets. Together they have turned them upside down.”

There is loads of commentary about what this topsy turvy new normal means for the oil industry and climate change. There is no doubt we are at a historical moment with the industry in deep structural and financial trouble and where a post-COVID-19 recovery could see a radical shift away from oil and into a just transition into renewables. But will that happen?

Yesterday, we at Oil Change International released a new briefing looking at exactly this question. We argue that a managed and equitable phase-out of oil and gas production is key to a just, resilient recovery – and we have a few suggestions of how to get there.

But, of course, Donald Trump is a die-hard pro-oil industry climate denier who will do anything to keep the industry afloat. On Tuesday, the President tweeted:

We will never let the great U.S. Oil & Gas Industry down. I have instructed the Secretary of Energy and Secretary of the Treasury to formulate a plan which will make funds available so that these very important companies and jobs will be secured long into the future!

Part of Trump’s plan seems to have been leaked to the Wall Street Journal, with the paper arguing that “The Trump administration is considering offering federal stimulus funds to embattled oil-and-gas producers in exchange for government ownership stakes in the companies or their crude reserves.”

One of the options on the table is the Government giving the oil companies money not to drill, which is essentially the Government taking ownership of the oil and then keeping it in the ground, until demand picks up.

Although this is said to be only one of several options on the table, which face difficulties with Democrats, Treasury Secretary Steven Mnuchin indicated they would do all they could to help the industry. He said “The president is determined we want to maintain our energy independence…Obviously the energy business is very important to the U.S”.

If the oil is not seized by the federal authorities it could be taken by the banks, reports Reuters. “Major U.S. lenders are preparing to become operators of oil and gas fields across the country for the first time in a generation to avoid losses on loans to energy companies that may go bankrupt” reported the newswire.

Apparently JPMorgan Chase & Co, Wells Fargo & Co, Bank of America Corp and Citigroup Inc are each in the process of setting up independent companies to own oil and gas assets.

This is exactly the wrong solution to the problem by both Trump and the banks. There must be no bail out for Big Oil. If the Trump Administration was to nationalize the industry it must be to keep the oil in the ground permanently to fight climate change.

It makes no economic sense for banks to keep losing shareholder money buying assets that are essentially worthless at the moment and will only decline in value as our need to address climate change gets more urgent. Politically and economically we should not be bailing out the oil companies and should use this opportunity to plan a green stimulus and just transition.

Black April could then become known as Green April. The month when Big Oil’s dominance was finally broken and a green stimulus began.