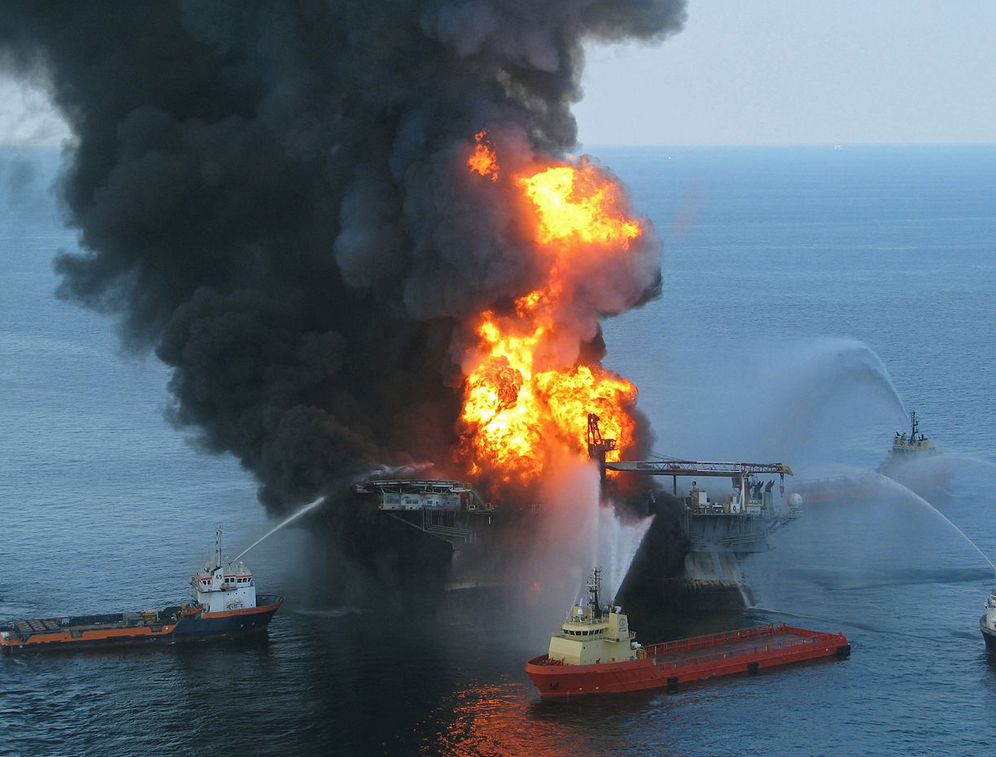 Ten years ago today, disaster struck the Gulf of Mexico, when BP’s Deepwater Horizon rig exploded some 40 miles off the coast off Louisiana. The explosion killed eleven workers and released at least 5 million barrels of oil into the Gulf, in what remains one of America’s worst environmental disasters.

The blowout and resulting pollution would last for months, and devastated communities along the Gulf Coast, as oil spread relentlessly both seen and unseen across the region. At one point, oil slicks from the blowout covered an estimated area of 57,000 square miles or some 149,000 square kilometers.

In those long ten years since the disaster, the world has moved on. And with many severely impacted by the COVID-19 pandemic, the disaster feels as if it were a long time ago. But just as it happened with the Exxon Valdez spill, the long dark shadow of the disaster still haunts many communities and businesses both in the United States and in Mexico. Hundreds of legal cases are still being pursued against the company.

Moreover, the pollution still seeps into the Gulf, slowly and silently poisoning the marine life, waters, mangroves, corals, lagoons, and mudflats of the Gulf. The local fishery industry has not yet recovered, either.

It could take at least up to 25 years for the Gulf to recover because of the toxic contamination. It could take longer. Evidence from the Exxon Valdez is that the pollution may well haunt future generations, as it has this one.

It is worth remembering that not only did the spill cause devastation, but so too did the dispersants used which broke the oil down into invisible pollution. Science takes years often to catch up with real world events. We are still only beginning to understand how toxic the spill was.

In February this year, for example, scientists at the University of Miami School of Marine and Atmospheric Science, published research that toxic and invisible oil spread well beyond the known satellite footprint of the Deepwater Horizon oil spill. Even though this was not seen – it was essentially “invisible oil” – toxic enough to destroy about half the marine life it encountered.

Marine life has still not recovered. Since 2010, studies show a 50 to 80 percent population decrease in deep water fish populations near the blowout site.

Earlier this month, research by the University of Florida found ongoing spill impacts on fish species in the Gulf. Other researchers at the University of South Florida sampled more than 2,500 individual fish representing 91 species from 359 locations across the Gulf of Mexico. They found evidence of oil exposure in all of them, including some of the most popular types of seafood.

One of the scientists, Steven Murawski, from the USF College of Marine Science said: “Literally all the fish that we’ve tested have some level of hydrocarbon; there are no pristine fish in this system.”

As the marine life still suffers, communities still fight for compensation, including many communities in Mexico, which were dependent on fishing before the disaster and have seen their livelihoods evaporate. The President of one fishing cooperative tells The Guardian “we’ve been mocked, humiliated and discriminated against by British [Petroleum] …and let down by our own government. Ten years of struggle and nothing.”

However, there have been no long-term studies monitoring the impact of the spill or dispersants conducted in Mexico. A lawsuit against BP is currently on hold in the country. In Louisiana, over a hundred cases involving thousands of Mexicans remain to be heard, too.

In contrast, the oil industry wants you to believe that the disaster is long forgotten and that they have learned from their deadly mistakes and are much more prepared again in what they say is the highly unlikely chance of anything untoward happening again.

They point to the formation of what is known as the Marine Well Containment Company, a company set up with USD $1 billion in the wake of the disaster, to point to the fact that they are better prepared than before for any oil spill and spill response.

The spin-machine from the industry and Trump Administration also argues that the subsequent formation of the Bureau of Safety and Environmental Enforcement (BSEE) means the Gulf is a safer place now than before the disaster.

Last month BSEE Director, Scott Angelle told members of Congress that “We’ve made our regulations safer.” He said the new agency had increased inspections “per facility by 86 percent” and “numbers of inspectors by 12 percent.”

But as usual with the oil industry not everything is as it seems. As the Chicago Tribune reports, under Angelle’s stewardship, key spill prevent measures such as the blowout preventer as well as other “well-control rules have been weakened, and many staff members are reportedly demoralized.” Many believe the agency is on the way to be “recaptured by the oil companies.”

If you unpick the spin and the lies, nothing has been learnt from Deepwater. The Trump Administration has gutted many of the protections brought in after the disaster, not least the Well Control Rule brought in by the Obama Administration.

The Washington Post reports that since coming into office the Trump administration has “rolled back” rules “by eliminating the need for independent inspectors.” That followed “the issuance of approximately 1,700 waivers to industry” by Angelle’s BSEE, which argued the rules were causing “unnecessary burdens.”

Due to Trump’s rollbacks, it is hardly surprising that many commentators believe we are heading for trouble. The Guardian reports that, according to experts, a “massive deepwater oil spill is nearly as likely today as it was in 2010.”

Indeed, Steven Murawski, from the USF College of Marine Science believes that “another deep-water blowout as inevitable.”

Elizabeth Johnson Klein, the Interior Department’s associate deputy secretary under Obama, told HuffPost, “The question of whether we’re any better off? My concern is we’re actually headed towards the exact same type of circumstances that were in place” at the time of the Deepwater disaster. “I don’t feel good about it.”

Last week, the NGO Oceana published a report in the lead up to the 10th Anniversary. “Offshore drilling is still as dirty and dangerous as it was 10 years ago,” said Diane Hoskins, Oceana’s campaign director.

Hoskins continued: “If anything, another disaster is more likely today as the oil industry drills deeper and farther offshore. Instead of learning lessons from the BP disaster, President Trump is proposing to radically expand offshore drilling, while dismantling the few protections put in place as a result of the catastrophic blowout… When the drill they spill.”