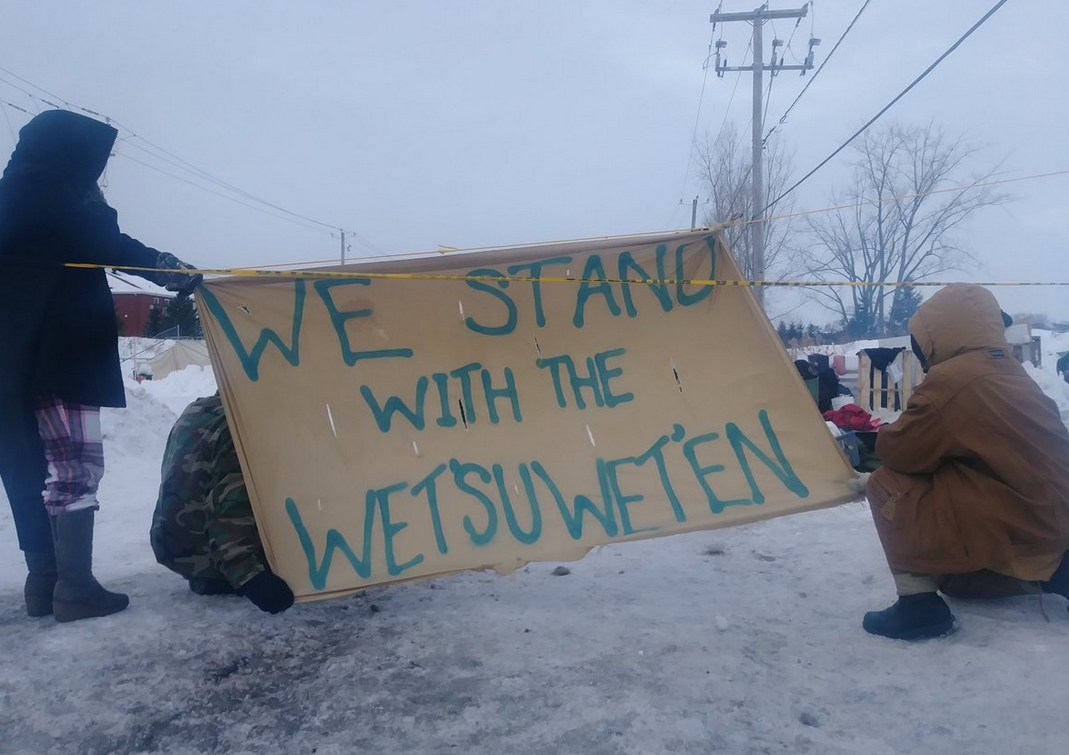 The warnings about failing to act on climate change come now literally on a weekly, if not daily basis.

The latest warning, stark as it is, does not come from environmental groups, or even scientists, it comes from the economists at JP Morgan.

In the past, JP Morgan has been criticised for being one of the largest funders of fossil fuels. It still is. But now it is warning of the dangers of climate change, too.

If we do not act on climate, human life “as we know it” could be threatened, says a report by the bank to its clients. “We cannot rule out catastrophic outcomes where human life as we know it is threatened,” wrote JP Morgan economists, David Mackie and Jessica Murray.

But politicians and their institutions carry on regardless, still believing that their actions are not accountable.

Given the political stand-off right now in Canada, with tensions having reached boiling point over the Coastal Gas Pipeline, and solidarity blockades across the country, you would have thought that the Federal Government would be doing everything to de-escalate the situation and find a solution.

The CAD 6.2 billion Coastal GasLink pipeline would transport fracked natural gas pipeline from northeastern B.C. some 670 kilometers to the coast where the CAD 40 billion LNG Canada facility (said to be the largest single private sector investment in Canadian history!) is due to be constructed too.

As I wrote earlier this month, “The scheme is not just a climate disaster, but a full-front assault on First Nations sovereignty, as it crosses Wet’suwet’en land. Building on a long history of militarized police brutality against the Wet’suwet’en and other nations, yesterday the federal Royal Canadian Mounted Police (RCMP) began enforcing a B.C. Supreme Court order to make way for construction of the Coastal GasLink.”

Ever since the RCMP moved into enforce the injunction, protests have sprung up across Canada targeting key infrastructure links such as rail lines, ports, and bridges. The blockages have become a major political issue in Canada. Indeed, yesterday, Canadian Prime Minister, Justin Trudeau stated this on Twitter:

We will continue working around the clock to find a lasting & peaceful resolution to the blockades across Canada. @Carolyn_Bennett, @MarcMillerVM, @BillBlair, and I discussed the latest developments earlier today. pic.twitter.com/sUwYJ5sUNj

A lasting and peaceful resolution to the current conflict would be to cancel the Coastal GasLink pipeline.

But Trudeau’s Government is actually thinking of doing the opposite: Investing in it.

According to the Canadian Star newspaper a federal Crown corporation, Export Development Canada, might lend money to support the Coastal GasLink pipeline, with a decision expected next week.

Export Development Canada (EDC) is an arms-length corporation owned by the federal government. As an export credit agency, is meant to support Canadian companies with overseas export efforts. Instead it is fueling climate destruction and colonization at home.

A report Oil Change International released earlier this year found EDC meant Canada was fourth in the G20 for fossil fuel finance, and much of this was for domestic oil and gas projects. Most famously, they were the institution that bankrolled the Trudeau government’s purchase of the TMX pipeline.

EDC confirmed to the Star newspaper that it is considering a loan to the company behind Coastal GasLink, TC Energy and its partners.

Jessica Drake, a spokesperson for EDC, tried to spin the fact that the money would come in loan, and this did not constitute investment: “It’s important to note that EDC is considering providing a loan in the form of project financing to Coastal GasLink and would not be ‘investing’ in the project. EDC does not provide grants or subsidies.”

Chief Na’Moks, one of five clan chiefs of the Wet’suwet’en nation, told the Star “It is highly inappropriate at this time. When we’re supposed to have discussions and then for them to put this out — it’s almost like they’re trying another avenue to ensure that the public believes that this will happen when we’re adamantly opposed to it,” he said.

It broke today that the Canadian government's @ExportDevCanada wants to finance Coastal GasLink & a loan approval could come as early as Feb 26.

Can't go into #Wetsuweten talks in good faith when you're looking to profit from CGL @JustinTrudeau! https://t.co/W6cIwoxu3a #cdnpoli