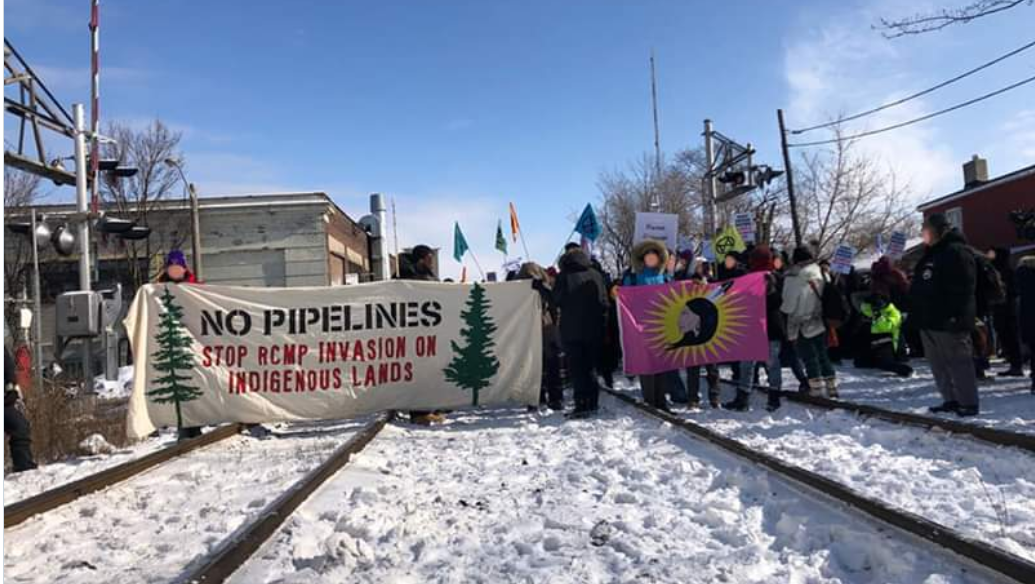 Canadian Prime Minister Justin Trudeau ran for office saying, “No relationship is more important to Canada than the one with Indigenous Peoples,” and promising that with respect to fossil fuel projects “governments grant permits, but communities grant permission.”

It’s an understatement to say Justin hasn’t lived up to these maxims. You cannot bludgeon, beat, intimidate, and drag people in the name of prosperity and progress.

You cannot use the same brutal violence akin to war, while at the same time speak soft soothing words of reconciliation or peace.

Because people will stand in solidarity. And in anger. And in defiance. Thousands are joining protests across Canada and the wider world, as more and more people express outrage at the corporate and state brutality being imposed against the Wet’suwet’en Nation on their territorial land, who are firmly opposed to the Coastal GasLink pipeline.

The CAD 6.2 billion Coastal GasLink pipeline would transport fracked natural gas pipeline from northeastern B.C. some 670 kilometers to the coast where a LNG Canada facility is due to be constructed too.

As I wrote last week: “The scheme is not just a climate disaster, but a full-front assault on First Nations sovereignty, as it crosses Wet’suwet’en land. Building on a long history of militarized police brutality against the Wet’suwet’en and other nations, yesterday the federal Royal Canadian Mounted Police (RCMP) began enforcing a B.C. Supreme Court order to make way for construction of the Coastal GasLink.”

And now people are fighting back against the RCMP’s actions.

From rallies to sit-ins to blockades on roads, ports, railway lines and even U.S.-Canada border bridges, the protests are spreading in response to the actions of the RCMP (Royal Canadian Mounted Police) and private security, who have been violently removing First Nations from the path of GasLink.

The pictures of the assault by the RCMP – who dressed in camouflage gear and wore masks to protect their identities – are horrific, as senior elders and protectors were forcibly removed from buildings, including a healing center.

Two days ago, the Unist’ot’en (one of five Wet’suwet’en clans, who have held an anti-pipeline blockade on their lands since 2009) issued a statement, condemning “these violent, colonial arrests and stark violations of Wet’suwet’en law, Canadian law, and of the United Nations Declaration on the Rights of Indigenous Peoples (UNDRIP).”

They added that they believed the actions were a clear violation of the recent directive from the UN Committee on Racial Discrimination (CERD) requiring Canada to halt the Coastal GasLink pipeline project and “withdraw RCMP from our territory in order to avoid further violations of Wet’suwet’en, constitutional, and international law.”

The Union of B.C. Indian Chiefs called the raids “senseless violence.” Its President, Grand Chief Stewart Phillip said, “we are in absolute outrage and a state of painful anguish as we witness the Wet’suwet’en people having their title and rights brutally trampled on and their right to self-determination denied.”

Since the RCMP starting enforcing the court order last week, Indigenous and settler youth have organized sit-ins in key government offices across the country, including at Prime Minister Justin Trudeau’s constituency office in Montreal.

Catie Galbraith, co-Chair of the Indigenous Student Alliance and member of the Chickasaw Nation of Oklahoma, told the McGill Tribune: “We’re here sitting in today in solidarity with the Wet’suwet’en and all the other folks who are resisting the RCMP on their land, we’re here as part of a broader solidarity movement.” Another student organizing with Catie, named Ella, firmly stated, “we’re not protestors. This is literally my life. I don’t protest. I don’t want my family to die, I don’t want my kin to die, I love my land, and I’m just done.”

Kanien’kehá’ka student, Amy Edward, added “It’s important to understand that Indigenous peoples are protectors. We come here today in respect with a good mind and good heart … We’re not acting just for the peoples of today: We act for the wellbeing of our future.”

They are not the only members of the youth who are outraged by the actions of the Canadian State and police. Yesterday, some 200 to 250 people peacefully blockaded traffic in downtown Vancouver. One of the demonstrators, Adonia Cormier-Sondraal, 17, told the local newspaper, the Straight, “We’re standing in solidarity with the Wet’suwet’en people, helping them protect their land—helping the people who have been here for centuries to continue to fight against the colonialism that is still affecting them.”

Meanwhile, Indigenous youth have also been demonstrating at the B.C. legislature, wrapped in blankets against the bitter cold. They successfully disrupted and delayed the provincial government’s speech from the throne this week.

Indigenous youth have been occupying the BC Legislature for more than 26 hours now in solidarity with Wet'suwet'en#WetsuwetenStrong pic.twitter.com/HYpec9QbpH

19-year-old Ta’Kaiya Blaney of Tla’amin Nation said “If Canada is willing to exercise lethal overwatch, shoot and kill Indigenous land defenders to push a pipeline through, that sets a precedent for all Indigenous nations around the world. We are not anti-pipeline protesters. This is about us defending Indigenous lands and Indigenous sovereignty.”

Another youth organizer, Kolin Sutherland-Wilson, added “Canada acts as a colony using military force to invade nations, displace people, and extract wealth from their territories.” Elsewhere in BC protesters have blocked access to two ports in the Vancouver area, too.

The protests have spread beyond BC as well. In Edmonton, people demonstrated against the Alberta Investment Management Company (AIMco), a public pension fund with a 65% stake in the pipeline, and the Bank of Montreal, calling on both to divest from GasLink. There have been sit-ins at politicians offices in Toronto and Ottawa, too.

One of those protesting in Toronto was Cricket Guest, an Anishinaabekwe Métis organizer who said: “Reconciliation is dead and we will shut down Canada until Canada pays attention and listens to and meets our demands.”

Meanwhile, other activists have blocked the Port of Vancouver, and solidarity actions have spread to Quebec. And all Via Rail services between Montreal-Toronto and Toronto-Ottawa are stopped until tomorrow due to an anti-pipeline blockade near Belleville, Ontario by Mohawks in solidarity with the Wet’suwet’en.

At the end of the day, Trudeau can’t be a progressive politician and treat Indigenous nations with violence and contempt. He cannot talk about reconciliation and brutalize First Nations on their own unceded land. He cannot heal the wounds by forcibly evicting people under gun point from a healing center.

As the Guardian noted: “The events of the past week have cast a shadow over the Trudeau’s image of a political leader seeking reconciliation with Canada’s marginalized and often mistreated First Nations.”

And that shadow grows longer by day to day.