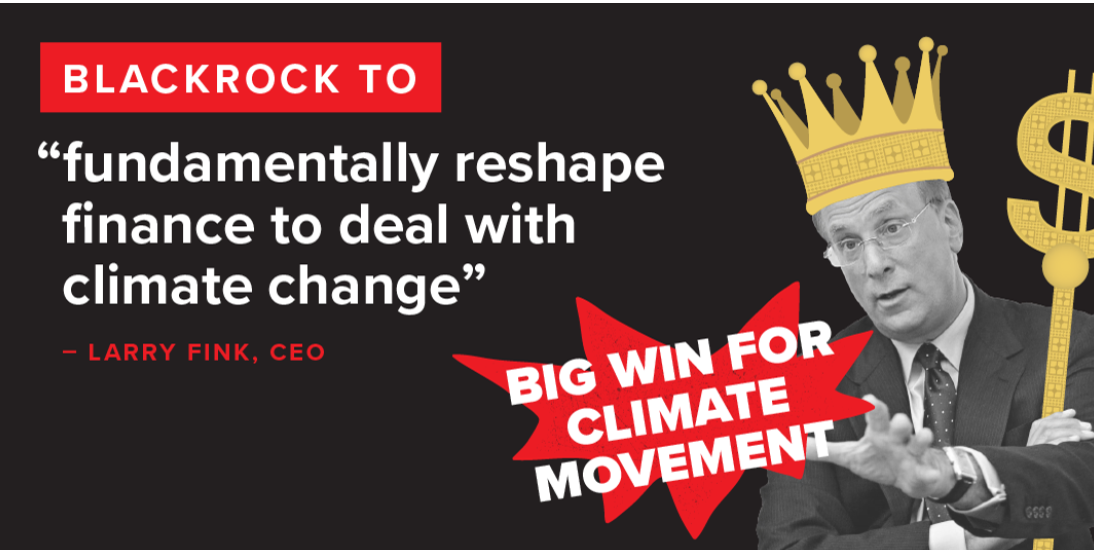 It was the big one that many climate campaigners had been waiting for.

For years, one of the targets for campaigners leading the fossil fuel divestment campaign has been the asset management company BlackRock.

Pressure had been building on BlackRock for some time. And you can see why: the company controls some $7 trillion in assets and therefore is hugely influential in the financial sector.

As the New York Times has noted: if BlackRock shifted its stance on climate, it “could reshape how corporate America does business and put pressure on other large money managers to follow suit.”

In August 2018, Larry Fink, the CEO of BlackRock attended a summit at the Vatican along with other oil executives such as Bob Dudley, the CEO from BP, Darron Woods, the CEO from Exxon, as well as executives from Royal Dutch Shell, Norway’s Equinor, Pemex of Mexico, and ENI from Italy.

At a parallel event, Pope Francis told delegates “There is no time to lose,” adding that it was “important that serious efforts be made to transition to a greater use of energy sources that are highly efficient while producing low levels of pollution.”

Fast-forward a year to August 2019, where a report by the Institute for Energy Economics and Financial Analysis (IEEFA) found that BlackRock was still heavily investing in fossil fuels and “continued to ignore the serious financial risks of putting money into fossil fuel-dependent companies.”

The IEEFA calculated that due to BlackRock’s continuing investments in fossil fuels, there had been a whopping US$90 billion in value destruction and opportunity cost of the fund managers investments.

According to the report: “Out of BlackRock’s US$90 billion in estimated losses, 75% are due to its investments in four companies alone – ExxonMobil, Chevron, Royal Dutch Shell and BP – which have all underperformed the market in the past decade.”

At the time, I wrote: “BlackRock may be wealthy, but that does not make it wise”.

Even last month, a British hedge fund manager, Christopher Hohn, accused BlackRock of “appalling” behavior for not requiring companies to disclose their sustainability efforts. According to the New York Times, Hohn said the firm’s previous efforts had been “full of greenwash.”

Well finally, it appears that BlackRock has wised up to the threat of climate change. On Tuesday, Laurence Fink, issued two letters. The first, addressed to CEOs and entitled “A fundamental reshaping of finance”, Fink wrote that “climate change has become a defining factor in companies’ long-term prospects…  awareness is rapidly changing, and I believe we are on the edge of a fundamental reshaping of finance.”

He added: “The evidence on climate risk is compelling investors to reassess core assumptions about modern finance.” He said that investors were increasingly “recognizing that climate risk is investment risk. Indeed, climate change is almost invariably the top issue that clients around the world raise with BlackRock.”

In a letter to clients, entitled: “Sustainability as BlackRock’s New Standard for Investing,” Fink wrote: “Because sustainable investment options have the potential to offer clients better outcomes, we are making sustainability integral to the way BlackRock manages risk, constructs portfolios, designs products, and engages with companies. We believe that sustainability should be our new standard for investing.”

One of the specific measures announced by Fink was “Exiting Thermal Coal Producers.” Fink outlined how because thermal coal was so carbon intensive “we are in the process of removing from our discretionary active investment portfolios the public securities (both debt and equity) of companies that generate more than 25% of their revenues from thermal coal production, which we aim to accomplish by the middle of 2020.”

Fink’s concern about climate is not related to moral or social conscience, but hard-nosed cash. As the New York Times pointed out: “Had Mr. Fink moved a decade ago to pull BlackRock’s funds out of companies that contribute to climate change, his clients would have been well served. In the past 10 years, through Friday, companies in the S&P 500 energy sector had gained just 2 percent in total. In the same period, the broader S&P 500 nearly tripled.”

The response to the news was not surprisingly supportive from commentators, although many said it was only a first step.

An article in Forbes noted: “When the world’s largest asset manager places sustainability and climate risk at the center of its investment approach, and commits to stronger sustainability advocacy actions, it is game-changing for capital markets.”

Writing in the New Yorker, Bill McKibben from 350.org said of the decision was “seismic” and “marked a watershed moment in climate history”.

He quoted Kingsmill Bond, an analyst who used to work at Citibank and Deutsche Bank, who now works for our colleagues at Carbon Tracker Initiative: “I, for one, see this as the beginning of the end for the fossil-fuel system. Who, now, will want to hold the stranded assets of the fossil era?”

But he also warned that one of the main weaknesses in the plan: “It doesn’t directly address BlackRock’s main business, which is passive index funds. The company has previously maintained that it can’t do anything about the contents of those indexes.”

Although this position main be changing regarding indexing, there is still a long way to go and in the words of McKibben, “still much work to be done.”

Diana Best, Senior Strategist for the Sunrise Project which is a core partner of the BlackRock’s Big Problem campaign, which has been calling for the company to disinvest, added: “BlackRock beginning its shift of capital out of fossil fuels, including today’s divestment of coal in its actively managed funds, is a fantastic start… but “we will be looking for additional leadership from the company in, as Larry Fink put it, ‘fundamentally reshaping finance to deal with climate change,’ including additional shifts of capital out of fossil fuels.”

Moira Birss, Finance Campaign Director at Amazon Watch, added that the announcement “is a major step in the right direction for BlackRock. However, it still leaves questions about how it plans to address the fact that it is the world’s biggest investor in deforestation – the second-biggest driver of climate change.”

As so often, the devil is on the detail. So for a more detailed and critical analysis of BlackRock’s announcement go here.

Additionally, the BlackRock announcement was not the only story in the fossil fuel finance world last week. On Friday, political activist and actress Jane Fonda hosted her last “Fire Drill Fridays” event outside the nation’s capitol – raising attention on how big Wall Street banks and other international financial institutions are still investing in helping companies drill, dig, and explore for even more fossil fuel reserves we can never burn.

At the same time, activists with the StopTheMoneyPipeline campaign shut down a Chase Bank one mile away, as JP Morgan Chase is the world’s largest financial lender to fossil fuel projects among big banks – contributing to over $196 MILLION since the implementation of the Paris Agreement in 2018.

Regardless of the long-term impact of BlackRock announcement – it’s clear that more action is needed to disrupt the status quo among big banks and their favorable lending policies towards fossil fuels. It’s time to shut them down.