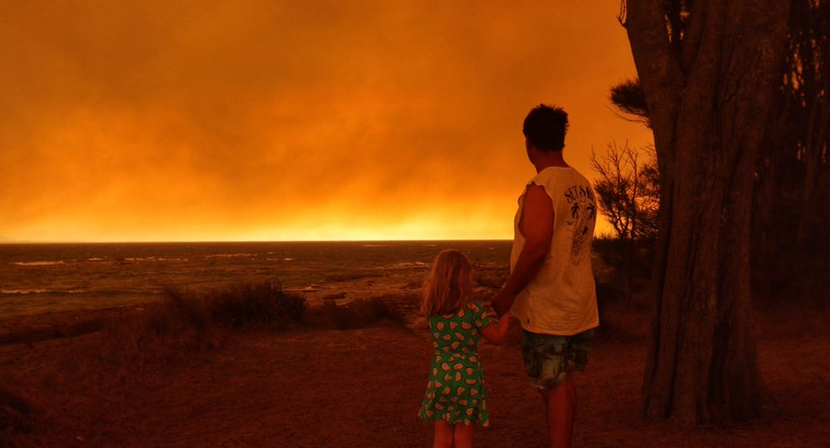 The old saying goes, when in a hole – stop digging. So when your country is on fire, put out the fire and learn what to do to stop further fires in the future.

So when your country is in the middle of an unprecedented climate catastrophe, it would make sense to radically alter your economy to usher in a Green New Deal and decarbonize as quickly as possible.

That would be the rational, sensible action that would save lives, help build, and help heal traumatized communities and businesses.

It would be a course of action that saves lives: some 25 people are known to have died so far.

It would be a course of action that saves money: The economic damage from the bushfires is likely to exceed $4.4 billion, according to financial analysts.

And it would be a course of action that saves wildlife. Chris Dickman, an ecologist at the University of Sydney, has updated his estimate of how many animals have been killed in the disaster.

He told HuffPost earlier this week. “The original figure – the 480 million – was based on mammals, birds, and reptiles for which we do have densities, and that figure now is a little bit out of date. It’s over 800 million given the extent of the fires now – in New South Wales alone.”

He added that the figure excluded animals such as bats, frogs, and invertebrates. With these numbers included, Dickman said it was “without any doubt at all” that the losses exceeded one billion, which would now be a “very conservative figure.”

But the Australian Government is not rational nor reasonable.

It is riddled to the core with climate deniers. It is blinded by its links to the fossil fuel industry. It remains committed to marching the country over a cliff toward climate destruction.

According to Reuters yesterday: “Australia’s government is sticking firmly to a position that there is no direct link between climate change and the country’s devastating bushfires, despite public anger, the anguish of victims, and warnings from scientists.”

Australian politicians have been appearing on international media denying that climate has anything to do with the fires.

The Australian government MP, Craig Kelly, appeared on British television to state that “to try and make out that somehow or other the Australian Government could have done something by reducing its carbon emissions that would have reduced these bushfires is just complete nonsense.”

The science and data speak the truth, though, as Ed Hawkins points out on twitter:

2019 was Australia's hottest and driest year on record. Is there anyone still in denial about this being a key factor making the bushfires go out of control? #AustraliaFires #ClimateCrisis pic.twitter.com/W6gzAzS0mA

Politicians are not alone in their climate denialism though.

As Ketan Joshi, an Australian energy and climate science communicator, writes in the Guardian today: “Rightwing media outlets in Australia have responded to the current bushfires by either refusing to give the story its due prominence or by spreading falsehoods.”

He continued: “Specifically, there is a claim emerging that environmentalists have blocked hazard reduction efforts by supposedly opposing dry fuel loads being burned or manually removed. It isn’t one of those half-truths – there’s no truth in it at all. Once spread by a rightwing journalist over 10 years ago, it has been given a new lease of life as a meme on social media.”

But there is hope.

The Independent MP, Zali Steggall, is planning to draw up a private climate change bill to put before Parliament, which she hopes will “shift the debate” on climate change.

Speaking to the Sydney Morning Herald earlier today, she said that the “dysfunction” within the federal Coalition over climate change means “we’re not preparing for that problem”. She added. “If this wasn’t a national emergency, what would it take to become a national emergency?”

Meanwhile, as the Rapid Transition Alliance points out today, despite the country’s climate denial politicians: “Growth in renewables in Australia has been enormous in recent years, with the state of South Australia and Tasmania both on track to achieve net 100% renewables in the next few years.”