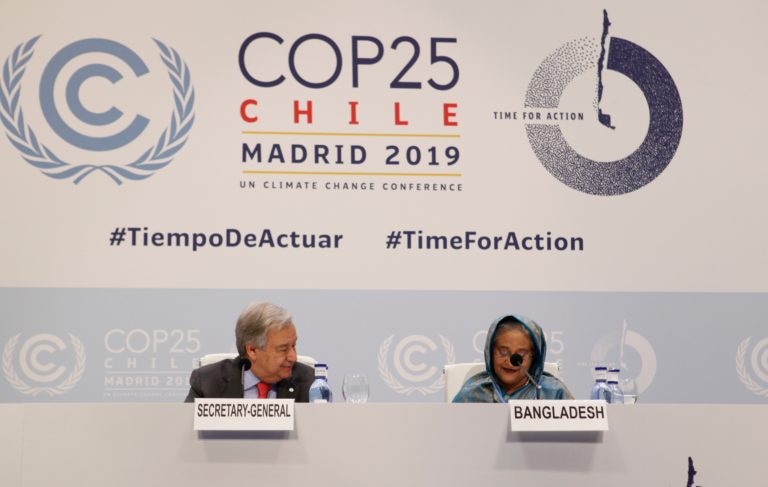 Earlier today, António Guterres, the Secretary-General of the United Nations opened the latest UN Climate Change Conference in Madrid (COP25) with a rousing speech, stating: “Do we really want to be remembered as the generation that buried its head in the sand, that fiddled while the planet burned?”

He added that “millions throughout the world – especially young people – are calling on leaders from all sectors to do more, much more, to address the climate emergency we face.”

He continued that the signs of climate change are unmissable: “The last five years have been [among] the hottest ever recorded. The consequences are already making themselves felt in the form of more extreme weather events and associated disasters, from hurricanes to drought to floods to wildfires.”

What we need is not an “incremental approach, but a transformational one”, said Guterres. “We need a rapid and deep change in the way we do business, how we generate power, how we build cities, how we move, and how we feed the world. If we don’t urgently change our way of life, we jeopardize life itself.”

He called on member states to adopt a “path where more fossil fuels remain where they should be – in the ground – and where we are on the way to carbon neutrality by 2050.”

He finished by saying “Let us show we also have the political will that people demand from us. To do anything less will be a betrayal of our entire human family and all the generations to come.”

He was not the only one making an impassioned plea.

Heads of state and government from the Climate Vulnerable Forum (CVF), the countries most at risk from climate change, called on all parties to the Paris Agreement to deliver new national emission limits by 2020 in order to safeguard global warming to 1.5°C.

The President of the CVF, Hilda Heine of the Marshall Islands, said: “The most vulnerable already face death row.” Not coming forward with a new, improved national domestic contributions (NDCs) – with a stronger national effort – by next year is the same as a government passing sentence on our future. To force our country to die.”

And dying they already are. Save the Children has released figures saying that some 33 million people in Africa are at emergency levels of food insecurity due to cyclones and droughts.

All the indications are that COP25 will not deliver the promised cuts needed. The betrayal looks set to continue as the oil industry and many governments remain in denial. As Pascoe Sabido, from the Corporate Europe Observatroy, tweeted:

The most polluting company in Spain, coal and gas utility @Endesa, is sponsoring #COP25. In the first day of the climate talks it's bought the front pages of all the biggest dailies presenting itself as a climate champion! https://t.co/G6SyC0NzOZ

Moreover, the International Association of Oil & Gas Producers tweeted that its communications manager was in Madrid. The only reason they would be there would be to promote more oil and gas drilling, and endorse false solutions to climate change, such as Carbon Capture and Storage.

Great to see that the Japan pavilion @MOEJ_Climate sees a role for #CCS at #COP25 ? pic.twitter.com/r3B2QYJSMT

Last week, the fossil fuel lobby group issued a report that outlined, despite the climate emergency, “we see a continuing rise in demand for oil and gas across most of the world. In many – if not all – regions, production is also rising.” It called for “continued investment in exploration and production” of oil and gas.

It is not just the fossil fuel industry that is failing. Countries are failing too.

In December 2018, at the COP24 in Poland, almost 200 countries signed up to a rulebook for implementing carbon dioxide reductions, described at the time as a “robust set of guidelines” for implementing the Paris Climate Change Agreement.

A report by the Universal Ecological Fund (FEU) has found that “almost 75% of the climate pledges are partially or totally insufficient to contribute to reducing GHG emissions by 50% by 2030, and some of these pledges are unlikely to be achieved.”

The report says “at least 130 nations, including 4 of the top 5 world’s largest emitters, are falling far short of contributing to meeting the 50 percent global emission reductions required by 2030 to limit the global temperature increase to 1.5°C above pre-industrial levels.”

It adds: “Because the climate pledges are voluntary, technicalities, loopholes and conditions continue to postpone decisive global action to reduce emissions and address climate change”.

It’s clear we’re in a dire situation. The oil industry wants to carry on drilling, most countries are postponing decisive action on climate change, and crucial governments, such as the US are still led by climate deniers. We are not fiddling whilst Rome burns, we are still throwing fuel on the fire.

Indeed, the FEU report quotes Abraham Lincoln, 16th President of the United States, saying: “You cannot escape the responsibility of tomorrow by evading it today.”