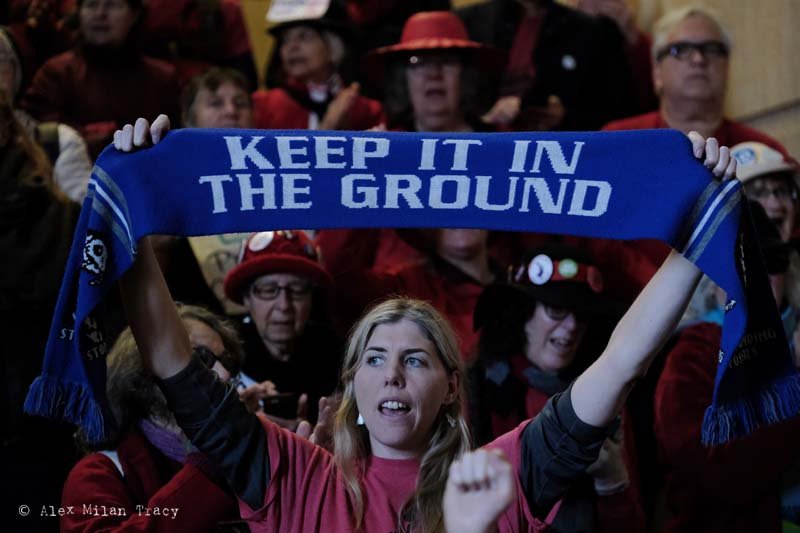 Yesterday, dozens of environmental and community activists staged a rally and sit-in at Governor Kate Brown’s office in Oregon.

They demanded that she publicly oppose the highly controversial $10 billion Jordan Cove Liquified Natural Gas (LNG) pipeline and terminal, which is due to be built on the Oregon coast.

The proposed 230-mile gas pipeline and export terminal would bring fracked natural gas from the Rockies and Canada to Coos Bay in southern Oregon, from where it would be transformed into LNG and shipped to Asia.

For nearly 15 years, local community and environmental activists have been fighting the pipeline and LNG terminal. There is much at stake, including tribal sites and cultural resources, old growth forests, clean drinking water and a critical salmon habitat as well as the climate.

In August 2018, in excess of 40,000 comments were submitted against the project, raising concerns about many of these issues above, including the fact that exploiting and exporting fracked gas is not commensurable with a transition to a safe climate.

Indeed, last year Oil Change International (OCI) calculated that the Jordan Cove project would result in over 36.8 million metric tons of carbon dioxide equivalent per year, some 15.4 times the emissions from Oregon’s last remaining coal-fired power plant, the Boardman Coal plant, which is set to be retired next year due to climate and air pollution concerns.

When only considering the in-state emissions alone, OCI calculated, the project would still be the largest source of greenhouse gas emissions in the state by 2020.

Pressure against the pipeline has been building for a while. Back in May, in what was then seen as a big win for water and our climate, the Oregon Department of Environmental Quality (DEQ) announced that they had denied the Clean Water Act Section 401 permit for the project. At the time, it was thought that the LNG plant could not be built without this permit.

However, the company that wants to build the project, Pembina, has not given up and says it intends to reapply for that certification again in January next year.

Moreover, last week the Federal Energy Regulatory Commission, the federal agency that oversees LNG projects, released its Final Environmental Impact Statement, which was widely seen as repeating its draft assessment, which hadn’t even taken into consideration the huge number of public comments.

The assessment was criticized by local groups. Stacey Detwiler of Rogue Riverkeeper said in a statement: “FERC continues to gloss over Oregon’s findings that this project will harm the streams and rivers that our communities rely upon for drinking water and fishing.”

FERC makes its final decision on the project early next year. But pressure has been building on Governor Brown to push back against Trump as well as oppose the project outright.

So yesterday, in excess of 100 people held a sit-in in the office of the Governor after the rally finished. They were wearing red shirts and sang “No LNG” and “Governor Brown, do your job”.

One protester, Bernadette Bourassa, of Eugene said: “It’s just a bad idea. It’s a continuation of the extraction industry where a few corporate billionaires get another millions, or billions. There’s nothing in it for people.”

“We’re not happy,” added Thomas Joseph, a member of the Hupa Tribe of the Lower Klamath Basin. “It’s something Governor Brown clearly knows and understands is bad for Oregon and is bad for climate change.”

"We're not happy," said Thomas Joseph, a member of the Hupa Tribe of the Lower Klamath Basin. "It's something [@OregonGovBrown] clearly knows and understands is bad for Oregon and is bad for climate change."#StopJordanCove #NoLNGhttps://t.co/xsJJuzfWzY

Late yesterday, Brown did speak to the protesters, but failed to oppose the project. “I believe that Oregonians are best served by knowing that there is a fair process and that I’m not putting my finger on the scale one way or another,” she said.

This message did not placate the protesters who continued the sit-in. According to South Oregon Rising Tide, which helped organize the event, as of last night 21 people had been arrested after refusing to leave her office, with a fundraising page set up to help those arrested. Meanwhile, expect the fight against Jordan Cove to intensify in the next few months. We will #StopJordanCove.