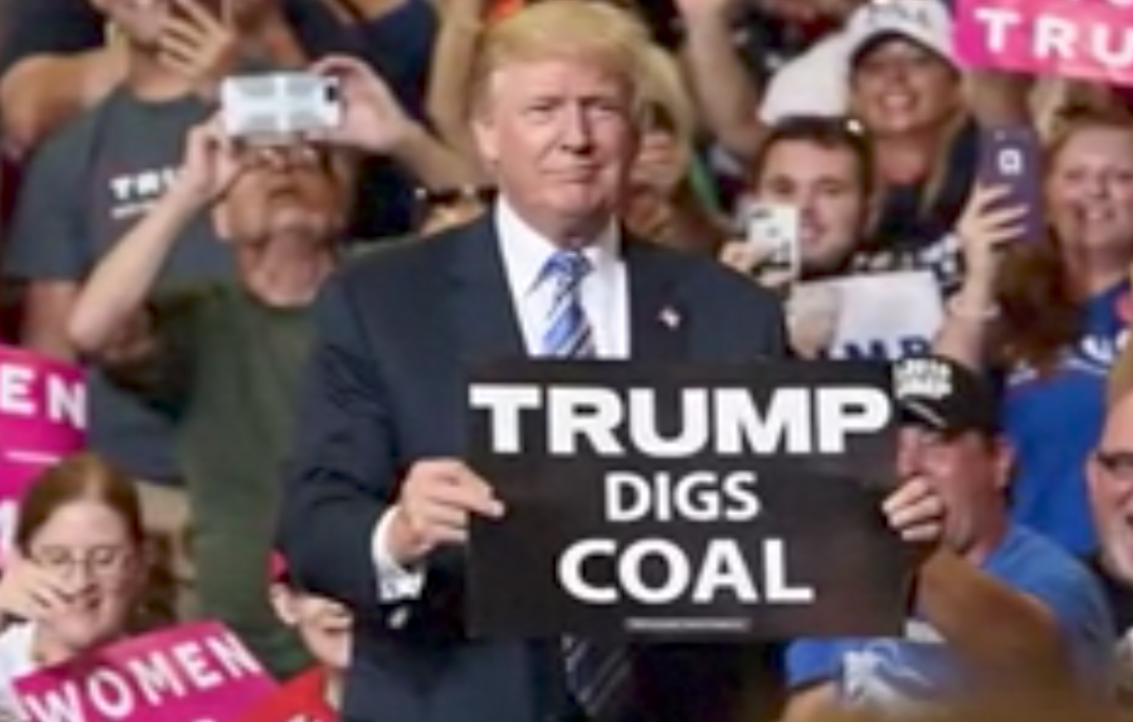 When the climate denier-in-chief Donald Trump became President, he promised that he would revitalize the coal industry and end what he labeled, the Obama-era war on coal.

Despite coal being dirty and carbon intensive and despite the climate emergency, the President would appear at rallies with the sign “Trump digs coal.”

Ten years ago, coal generated 45 percent of US electricity. Last year that share had halved. Put another way, since 2010, power generators have announced the retirement of more than 500 coal-fired power plants. Meanwhile, the price for wind energy has fallen by over a third in ten years, and renewables have expanded.

And the direction of travel is only going one way, as the demand for coal in the US drops to the lowest level for decades and will continue to fall.

As The Hill reported this week, in an article titled, ‘America’s demand for coal drops to new low’, “renewable energy sources could overtake coal’s remaining market share in coming years, as states like Texas and California are pushing hard to reduce their reliance on fossil fuels for power generation.”

Trump may try and prop up coal at a federal level, but he cannot stop state-level action to tackle our climate emergency. Therefore, try as he might, Trump cannot stop the slow death march of coal towards the history books, at least in the US.

Since 2017, 15 percent of coal power plants in the U.S. have been retired. And already this year, there have been eight major coal bankruptcies. And there are more to come. Reuters reported this week that the operator of New York state’s last active coal-fired power plant, located north of Buffalo, filed with state utility regulators for permission to shut in February next year.

According to Reuters, “The company said in a release that it is retiring the plant due to stricter emissions regulations designed to eliminate coal in New York and deteriorating power market conditions.”

The news about New York comes hot on the heels of Murray Energy, the country’s largest privately owned coal miner, which filed for bankruptcy last month. Murray Energy’s demise came despite financial incentives and regulatory tricks being played to keep it artificially afloat.

Soon after the election, Murray donated $300,000 to Trump’s inaugural committee and gave the President a wish-list that would artificially promote coal but help wreck the climate.

As a recent article in Foreign Policy noted: “Robert Murray, the eponymous owner of the now-bankrupt firm, has long been one of Trump’s staunchest backers; he repeatedly advocated for all sorts of government intervention to prop up his business, including pulling out of the Paris climate agreement, nixing former President Barack Obama’s Clean Power Plan, forcing utilities to buy coal, slashing safety regulations, and eviscerating the U.S. Environmental Protection Agency.”

But it was to no avail. Murray Energy has filed for bankruptcy. Also this week, the largest coal-fired power plant in the western U.S. – the Navajo coal plant – permanently closed. In the words of Bloomberg, it became the “latest testament to the fossil fuel industry’s decline.”

And coal’s decline is set to continue: One analyst, Taylor Kuykendall, who covers the industry for S&P Global Market Intelligence, argues “I was just at a coal conference, and the consensus there was that coal country has more bankruptcies coming, whether it’s under Trump or not.”