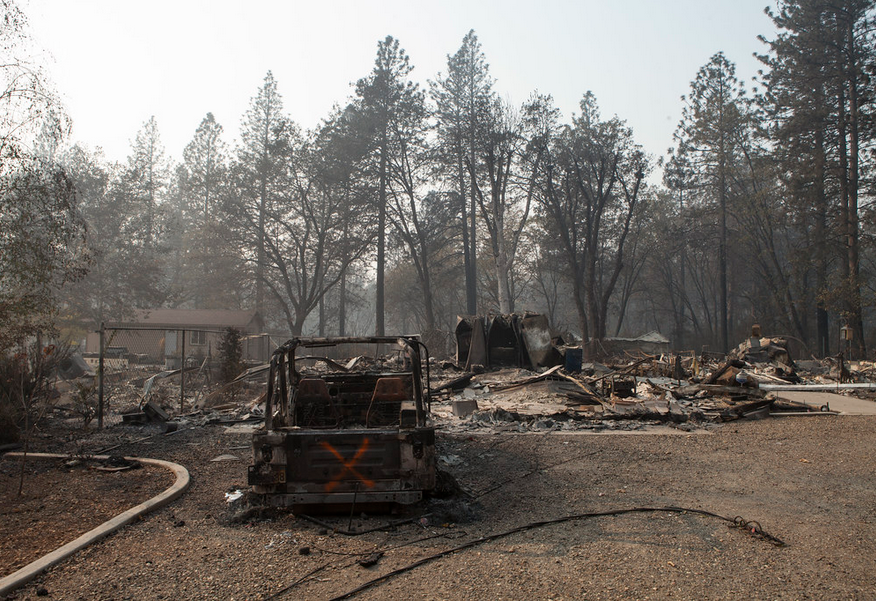 Some anniversaries come and go, but some last a lifetime. Today is the first anniversary of the devastating wildfires that ripped through the town of Paradise in California, a year ago.

Tens of thousands of residents had to flee, and tragically eighty-five lives were lost in Paradise and the surrounding hills. Today, Paradise will pause to remember the dead and destruction for eighty five seconds. One second for every life lost.

The current Mayor of Paradise, Jody Jones, says she wants the community to come together today and “celebrate the progress we’ve made and look to the future and what we can become… We were never lost.”

Although the immediate impacts of the fires – the destroyed buildings and vehicles have been largely removed, the scars of last year’s fires still run deep. As the anniversary has approached, it will have been made all the harder but the new swathes of wildfires sweeping California.

The anniversary has also been made all the harder by the continuing bad news of warming temperatures and our wider climate emergency. There have been more droughts, floods, hurricanes and fires in the year that has followed. Even in the last 24 hours, we have soaring temperatures and raging bushfires in Australia and floods in the UK.

Additionally, as the anniversary approached, there had been a series of articles by journalists reporting from the scene in California. Many former residents are still trying to pick up the pieces of their shattered lives. According to the Guardian, 90 per cent of the population of 27,000 remains displaced. That means only 3,000 have returned.

The “former and current residents are navigating a life forever changed,” reports the paper. “Paradise will never be the same place it was, residents agree, but a new version of the town is emerging, spurred forward by those trying to help it rebuild.”

The paper continued: “Some people can’t – or don’t want to – return, unable to afford the cost of rebuilding or fearful of life in an area at risk for wildfires. In fact, most of those who lived in Paradise and the surrounding communities a year ago, no longer do.”

The San Francisco Chronicle adds that Paradise “was beautiful and affordable, a place where retirees and young families could make a life.” But the Camp Fire “threatened its very existence.”

The new normal for California is represented by the story of Jerry Wilson and Patty Wilson, who are currently rebuilding their home for a third time after it was destroyed by fire. “It’s like deja vu,” Wilson told the paper. “We see the past and present at once in this house. But it’s just part of life, I guess. You do what you have to do.”

The new normal means that due to climate change, Paradise is not alone in being at threat from wildfires, as we have witnessed this year again. Some 2.7 million Californians live in areas at very high risk for wildfires. Nearly 180 cities and towns are in the highest hazard areas.

As Naomi Klein reports in the aftermath of the fires, “With drought and sea-level rise already making large swaths of our warming planet uninhabitable, we have entered an era in which more and more people are going to have to live together on less and less land. If we don’t want that to plunge our societies deeper into xenophobic backlash, we will all have to rapidly embrace the kind of policies and supports that will help us live in these denser settlements without turning on one another.”

She adds that “A Green New Deal-style approach – which fuses the battle against planet-warming pollution with the kinds of universalist health, housing, and transit policies that make daily life less stressful and more humane – is not, therefore, one of many possible climate solutions. Having exhausted every other option, it is the only kind of climate response that stands a chance of not going up in smoke.”

Indeed, we owe it to the people of Paradise to act on climate. Knowing there is firm action to address our warming world will help ease the pain that haunts many survivors.