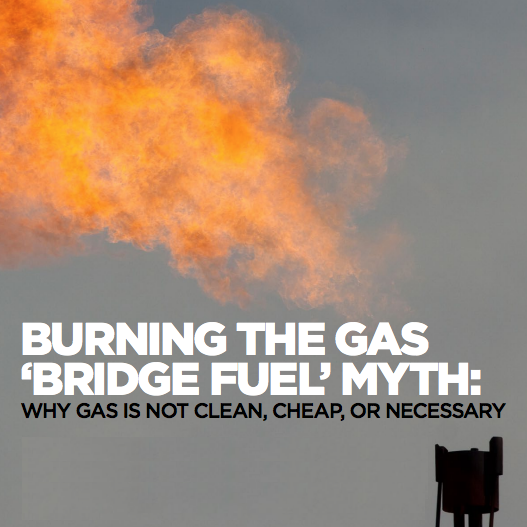 Last week, we joined forces with fourteen local and national organizations to host a speaker’s panel in Raleigh, North Carolina, breaking the false narrative that gas is a bridge fuel to a stable climate.

The panel was the third installment in our “Bridge Fuel” Myth series, but it was unique in that it connected many local issues that North Carolinians face to the problem of gas more widely.

In North Carolina, Governor Roy Cooper continues to endorse new fossil gas infrastructure – which is completely misaligned with what climate science says we need to do to stay within Paris climate limits.

Just days before the event, Dr. Drew Shindell, a long-time climatologist at NASA and a coordinating lead author of last year’s Special Report by the Intergovernmental Panel on Climate Change (IPCC), released an open letter to Cooper imploring him to instate a “permanent moratorium” on new gas infrastructure in North Carolina.

The pressure falls specifically on the proposed Atlantic Coast Pipeline, which is currently headed to the Supreme Court after being repeatedly contested by affected communities and local environmental groups.

.@LorneStockman: "We need to start going after the fossil fuel industry head-on, removing the BILLIONS in subsidies they're receiving each year & stopping new infrastructure permits before they're even issued" #ncpol #GasIsNotABridgeFuel pic.twitter.com/OpWqks4mJe

The first speaker was Jorden Revels, who spoke about the impact that fossil gas infrastructure and other projects have disproportionately placed on Indigienous communities and communities-of-color.

“Ever since the early 1900s, the impacts of capital projects have been perpetuated upon our peoples, with corporations trying to secure our natural resources for profit,” he said in his talk.

"There is more value on the dollar sign than on the livelihood of our people..." pic.twitter.com/KBRClyGKHP

Second, William Barber III spoke to the intersectionality of environmental justice and the climate crisis, including the proposed Atlantic Coast and Mountain Valley Pipelines.

“When you look at the climate science, when you look at environmental justice, and the economics…the talking points do not hold. Natural gas pipelines as a climate solution is a lie,” he stated.

Next, Lorne Stockman delivered a robust presentation on our recent report, Burning the Gas ‘Bridge Fuel’ Myth: Why Gas Is Not Clean, Cheap, or Necessary.

Recognizing that methane leakage is often the focus of arguments against gas, Stockman focused on other key arguments such as how gas breaks the carbon budget, coal-to-gas switching fails to cut emissions enough, and how new gas infrastructure locks-in emissions for decades to come.

“It’s clear from carbon budgets,” he said, “that we can’t be building more pipelines and gas power plants which enable more drilling and gas production.”

.@LorneStockman: "Even if we phase out coal-fired power plants globally by 2035, there exists an emissions gap between our reductions and our 1.5C temperature target. Coal-to-gas switching just doesn't cut it." #GasIsNotABridgeFuel pic.twitter.com/NJvvqVTmfM

Lastly, Sherri White-Williamson took the stage, discussing the historical and pervasive grip the oil and gas industry has held across low-income and communities-of-color across the United States for decades.

From Richmond, CA to Mossville, LA, Manchester in Houston and Corpus Christi, TX, fossil fuel corporations and their infrastructure have poisoned communities for decades, choosing these regions because more affluent, white neighborhoods had the means to mobilize against such infrastructure.

Closing with a quote from Rev. Benjamin Chavis: “The issue of environmental racism is an issue of life and death. It is not just an issue of some form of prejudice, where someone doesn’t like you because of the color of your skin. This is an issue that will take your life away – if you don’t get involved.”

Sherri White-Williamson: "In Corpus Christi, low-income minorities in subsidized housing were displaced due to expansion of fossil fuel infrastructure. The city is to become one of the largest ports in the country for oil."

This is one of thousands of stories across the globe. pic.twitter.com/8oo2BdVI6s

Gas has played a controversial role in North Carolina for a long time. Last year, the state legislature gave over $7 million to school districts that the Atlantic Coast Pipeline would cross through, after Gov. Cooper brokered a deal with Dominion and Duke Energy to fast-track the pipeline.

Two hours later, the Department of Environmental Quality granted a key water quality permit that would allow the project to proceed.

Clearly #GasIsNotABridgeFuel to renewable energy, nor a viable climate solution for North Carolina. From the local impacts of gas infrastructure in North Carolina, to the historical and disproportionate burdens the oil and gas industry has placed on low-income and communities – the economic, scientific and moral arguments from our speakers make it clear that gas is a fast track to environmental and climate disaster.