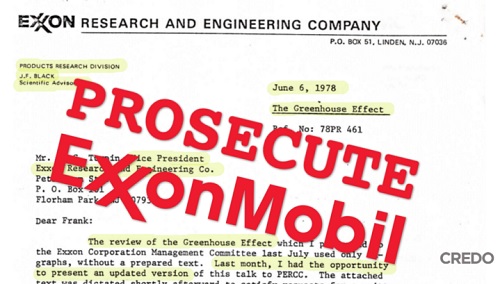 Today, history will be made in the quest to hold the oil industry responsible for our climate crisis.

In a court room in New York, Big Oil will finally be in the dock for misleading investors over the financial risks of climate change.

The proceedings, known as The People of the State of New York v. Exxon Mobil Corporation, are due to start before a judge today and last for about three weeks. They date back to last year when the New York Attorney General filed a lawsuit against Exxon on behalf of investors for the scandal that has become known as #Exxonknew.

The legal case is being bought under the Martin Act, which is designed to prevent stock fraud. If Exxon loses, damages could run into the billions of dollars.

This is not a scandal that involves low ranking officials. This is a scandal that goes to the top. It alleges that former Exxon CEO, Rex Tillerson “knew for years that the company’s representations… were misleading.”

InsideClimateNews, which has been at the forefront to expose Exxon’s climate fraud, outlines the heart of the trial is the so-called “proxy cost” of carbon that Exxon had been using.

“For years, Exxon had been using something called a proxy cost of carbon to estimate what stricter climate policies might mean for its bottom line. But as pressure from shareholders grew, a problem came sharply into focus”. In 2013, an “internal presentation warned top executives that the way the company had been applying this proxy cost was potentially misleading. That’s because Exxon didn’t have one projected cost of carbon. It had two.”

According to InsideClimateNews: “Exxon is accused of disclosing one set of these projected carbon costs to investors while planners used an entirely different set internally for evaluating investments. The public set was more conservative and projected that climate policies would be more stringent, while the internal one assumed more modest attempts to limit emissions.”

The effect of using these dueling estimates is that “Exxon hid tens of billions of dollars in potential costs, downplaying the risk to investors and inflating the company’s value.”

There is no surprise that Exxon has always denied the legal case, calling it “misleading” and one that “deliberately misrepresents” its position on climate change.

But the evidence keeps on piling up.

Yesterday, a team of academics published further evidence of the fossil fuel industry’s decades-long well-funded, well-orchestrated denial-and-delay disinformation campaign on climate change. The key points in the report are:

One of the authors, Geoffrey Supran, from the Department of History of Science at Harvard University said: “For 60 years, the fossil fuel industry has known about the potential global warming dangers of their products.”

Supran continued: “Instead of warning the public or doing something about it, they turned around and orchestrated a massive campaign of denial and delay designed to protect profits. The evidence is incontrovertible: Exxon misled the public.”

The trial’s opening and closing statements will be webcast live by Courtroom View Network.