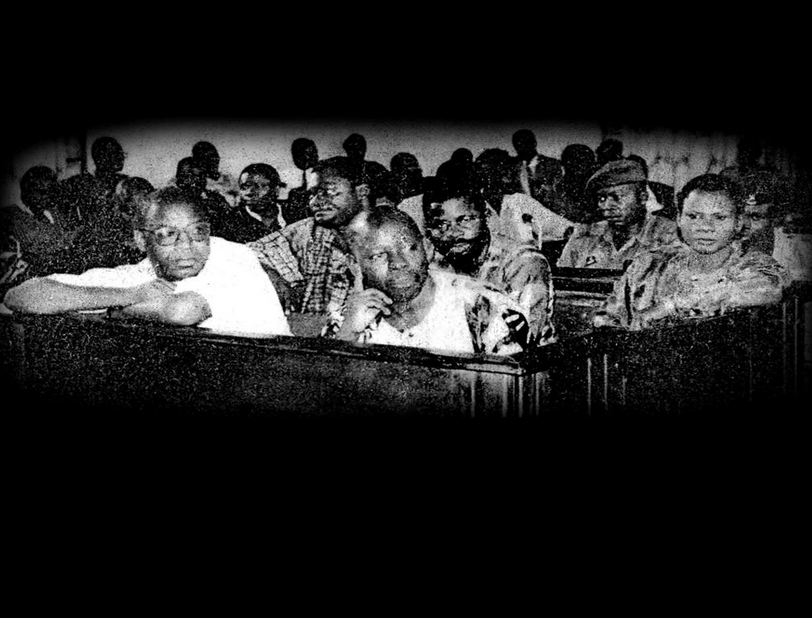 I am writing this as a feint autumn sun struggles to stretch through my window. I can hear the wind wrestle the last stubborn leaves off the increasingly bare trees. Any remnants of summer now are long gone, as the days draw ever shorter.

Looking down from my window, I have a wobbly row of books. As books have a habit of doing, some have a heavy layer of dust on them. Like all of us, they are growing old. Many of the books are on oil. A good few are on Shell and its corporate atrocities in the Niger Delta.

I, like so many others, have written many words on Shell, outlining their rampant pollution, double standards and complicity in human rights abuses, including potential involvement in the death of the Ogoni 9 in 1995.

Ken Saro-Wiwa, the playwright, novelist and activist was one of those men. When I started working with Ken Saro-Wiwa and Greenpeace amongst others to highlight Shell’s collusion and complicity and ecological devastation, I was a young man. It was the early nineties.

Decades later I am now the same age as Ken was when he died. In the months before he was murdered, when he was in detention, I used to imagine what it was like being incarcerated in a Nigerian prison, where the day light was denied you and often you only had darkness as a friend.

His incarceration would have been all the worse, because his only “crime” was to have started one of the first true grass-roots campaigns against Shell for polluting his homeland. To mobilise 300,000 people to march against the oil giant in a peaceful, non-violent way. Ken knew he was innocent and that the state and a company had conspired to frame him and the others, in order to silence the protests.

Sometimes letters or writings from Ken would be smuggled out. Some made it into the book, A Month and Day, the story of his detention in 1993, before he was arrested again on trumped up charges of complicity in murder a year later.

A Month and a Day is one of those dusty books on my bookshelf, you know the ones where the pages are beginning to go spotty. The introduction to the book was written by Ken’s old friend, William Boyd, who used to receive letters from Ken. “I am mentally prepared for the worst, but hopeful for the best,” he wrote.

Ken remained hopeful until the end. But one of all our failures was underestimating the total power of the state and Shell to crush Ken and the other Ogoni. Raw political power mixed with brutal corporate might. It was a toxic mix.

In another letter to another of Ken’s close associates, Sister Majella McCarron from Ireland, Ken wrote: “I did let you know that Shell are represented by Counsel holding a ‘watching brief’ at the trial. When that got embarrassing, they got the Counsel who is also Chairman of the Rivers State branch of the Nigerian Bar Association to publicly withdraw from the Tribunal while secretly representing them through the Bar Association which can legitimately be at the Tribunal.”

Shell had always maintained that the trial of the Ogoni 9 had nothing to do with them. So the obvious question was if that was so: why were they represented at the trial?

We knew there was more to the story: But finding the evidence was hard, publishing it even harder.

Writing about Shell’s collusion with the military was difficult. Put Shell, collusion, murder, complicity into a sentence and lawyers would baulk. They would reach for the red pen. The long shadow of Shell would spook them into demanding that your copy was watered down; paragraphs and pages removed.

Another two of those dusty books, Green Backlash, written by me and The Next Gulf, co-written with James Marriott and Lorne Stockman, were heavily edited by the lawyers, especially when it came to Shell. We managed to get some of the evidence out, but not all.

Already, there were important details beginning to emerge of Shell’s collusion, though. The British barrister, Michael Birnbaum QC, sat in on the trial of the Ogoni 9 and wrote a report entitled “fundamental rights denied.” He outlined the systematic legal abuse that Ken and the others had suffered from.

Buried deep in his report, on the last page of the last Appendix, was the fact that the two chief witnesses at the trial alleged to having been bribed by Shell and others to give evidence against the Ogoni 9.

It is worth pausing for a moment to recognize the significance of this information: the accusation was that Shell had colluded with the Nigerian military to bribe witnesses to silence Ken and the others. A British and Dutch-based multinational doing dirty deals in backrooms in the dark to silence their critics. I should add, before the lawyer gets too twitchy, that Shell has always denied any accusations of bribery or collusion. And it still denies them to this day.

Despite Shell’s denials, since the day that the Ogoni 9 were murdered, more evidence has come to light of Shell’s complicity with the military, through dogged determination from journalists, lawyers and human rights activists.

Court documents from the legal case between the Wiwa family and Shell provided further evidence of wider collusion between Shell and the military. I and a colleague, Eveline Lubbers, wrote about them in the Independent on Sunday: “The evidence also reveals that the notorious military commander Lieutenant-Colonel Paul Okuntimo, whose troops were implicated in murder and rape, was in the pay of Shell at the time of the killings and was driven around in a Shell vehicle.”

In 2002, the widow of one of the others, Esther Kiobel first sued Shell in the USA, where she had been granted asylum. Over ten years later, the US Supreme Court ruled that it did not have jurisdiction over the case, meaning US courts never got to examine the facts of the case, either.

Earlier this year, the District Court of The Hague heard the first arguments in Esther’s case against Shell. And this week, the court finally heard from the witnesses. Central to the case is whether Shell bribed witnesses in the trial of the Ogoni 9.

I would have loved to be there to listen last week, but I could not. But the Amnesty team, who have done so much to pursue justice, were there. The following account is taken from live tweeting from the court by Mark Dummett and his colleague, Sabrina Tucci. I let the tweets speak for themselves. Thank you, Mark and Sabrina.

The identity of the first two of the witnesses were kept confidential.

Here is the first witness:

he then claims that Shell and government officials offered him various bits of "help" – a job, house, money – for testifying in court.

he said he knew who they were because he spoke to them for over any hour. also their car had the Shell logo on the side

he says others were offered bribes too

Here is the second witness:

was paid 30,000 Naira. All the witnesses received money. Were promised more money. Assumes it came from Shell. Who else?

The third witness was named as Naayone Nkpah, who was quoted in the original Michael Birnbaum report.

He too claims he was offered bribes by Shell to testify, falsely, against the Ogoni 9.

He says he was presented with a witness statement, implicating members of the Ogoni 9, and told to write it out in his own hand. "I did it, with fear."

next allegation: Nkpah says that in the run up to the trial of the Ogoni 9, the witnesses received coaching from police and others twice a week. After the last session, he claims that they were joined by a man he believed to be Shell's lawyer. Can't remember the name.

"They said, they will surely give us cash and they promised us job and they said because Shell is involved they will give us contracts with Shell"

Another witness to testify this week was Ledum Mitee, who was also tried alongside Saro-Wiwa. At the time he was Ken’s deputy. He was the only one on trial who was acquitted.

Mitee says that when he was in prison, he heard that prosecution witnesses were introduced to Shell people and were promised "all kind of things", such a jobs, houses and money, if they agreed to testify against the Ogoni 9.

It is difficult not to understate how important these testimonies are to hopefully hold Shell to account after all these years.

The court is now not expected to sit until February next year, which ironically, will be a quarter of a century after the Ogoni 9 were murdered.

“For more than twenty years Shell has escaped scrutiny over its role in these tragic events. We applaud the courage and persistence of Esther Kiobel and the other women who have brought this case,” says Mark Dummett from Amnesty. “This case exemplifies how hard it can be for the victims of human rights abuses to hold a powerful multinational corporation to account.”

Decades should not have to pass for the truth to be told. It is so brutally hard to speak truth to power. The road to justice is long and painful. Shell would have hoped that these accusations were buried a long time ago. But no. Hopefully finally justice will be done. Until then, the dust should never be allowed to settle.