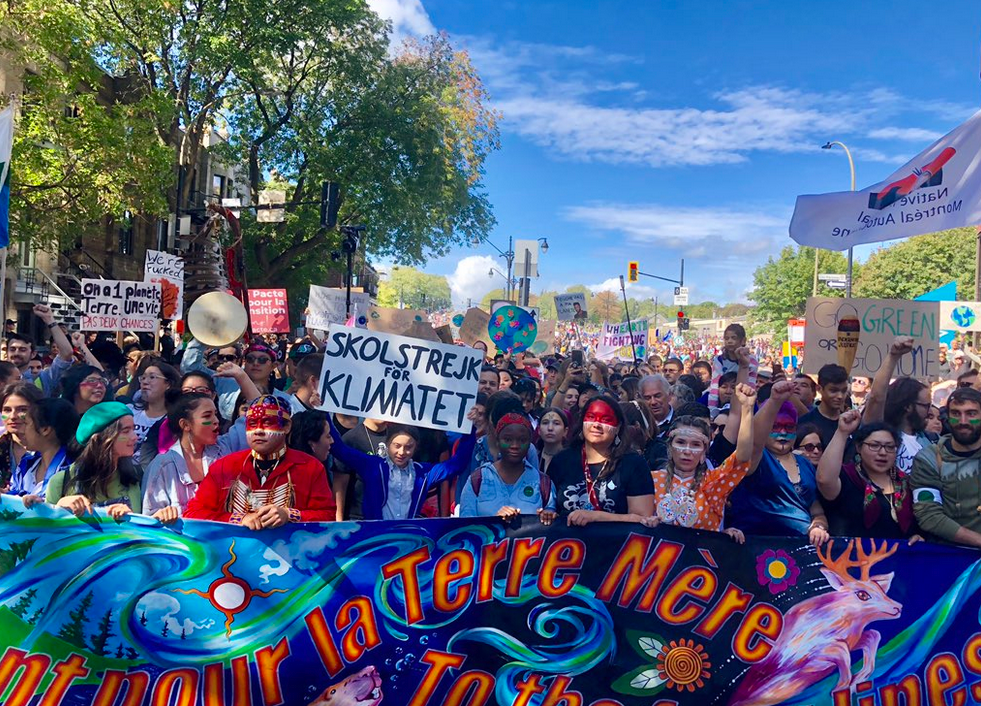 Every day more people join protests and strikes to demand urgent climate action. Over the last two weeks, over seven million participated in climate strikes, protests and demonstrations. Today, the school strikes continue around the globe.

Next Monday, activists from Extinction Rebellion will join what they are predicting will be their biggest protest yet. On six continents, people who have never protested before, including ex-Police, will take to the streets.

The teenager who inspired the school strikes, Greta Thunberg, is now favourite with the book-makers to win the Nobel Peace Prize.

One former winner of the Prize, in 1984, Desmond Tutu, wrote in the Financial Times yesterday that climate change is the apartheid of our time.

Tutu wrote that “corporations, financial institutions and socially conscious citizens must pull us back from the climate change abyss. They have the muscle to make renewables mainstream and reposition fossil fuels as the tobacco of the energy industry.”

But just as we think we are gaining climate momentum and that wave after wave of protest will lead to meaningful and urgent climate action, we need to think again. For some climate is not the new tobacco. For some smoking remains cool, even if kills you. Because the climate change denial echo chamber remains as influential as ever, especially in the upper echelons of policy makers in Washington DC.

A new report has found that “echo chambers” of climate denial have been emboldened and strengthened by the Trump Administration. The authors note how the small echo chamber continues “to play a significant role in the network of information exchange among policy elites and in the adoption of new information sources over time.”

The report, published in the peer-reviewed journal, Environmental Research Communications, found that whereas previously, “echo chambers centered on specific policy instruments”, now “opinion regarding whether or not climate change is caused by humans (i.e. is anthropogenic) has become the central organizing force behind echo chambers in the US climate policy network.”

The study concludes that “these results provide new empirical evidence that ideological polarization drives the selection of expert information in the debate around climate policies.”

Dana Fisher, co-author and sociology professor at the University of Maryland, said “the president has empowered the people who don’t want there to be any climate policy to hunker down in their echo chambers.”

What is interesting is that this climate denial echo chamber in Washington D.C. will be predominantly male, white and old. They represent the climate dinosaurs; they are against the younger generation. Other research undertaken by Fisher found that 68 percent of organizers and 58 percent of participants of the recent youth strikes identified as female.

Fisher also found that people of color made up more than a third of protesters in Washington in the recent strikes, reflecting the wider racial demographics of the United States.

So climate change is more than a fight over the future of our planet– it is a fight between young and old, male and female, white versus people of colour, people of power and privilege versus people from impoverished and indigenous communities.

If we have to have any chance of a livable future, we must somehow break open that echo chamber and make the dinosaurs listen to us and the science. Or we kick them out of power. We have no choice. Collectively, we defeated apartheid, and we can defeat the dinosaurs too. And that is why thousands will be protesting on Monday and again next Friday.