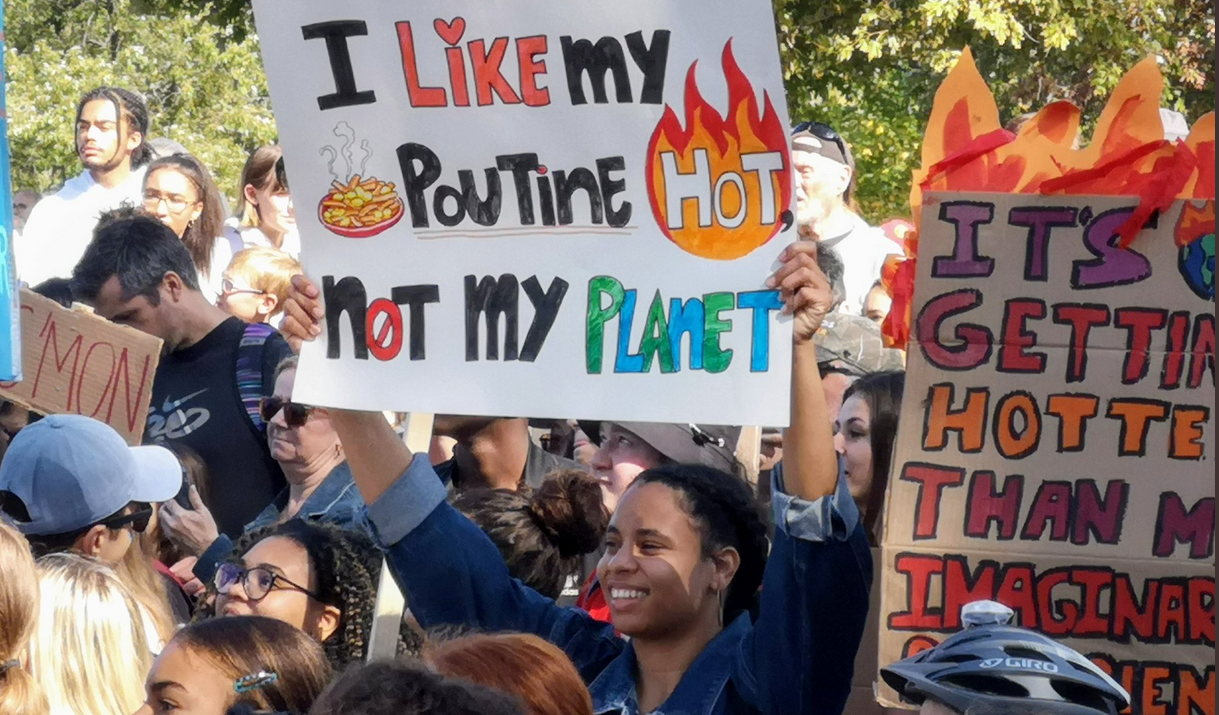 As I write, another massive wave of climate strikes is sweeping the globe. From New Zealand, across Europe, Tanzania, Mumbai, Myanmar to Canada, millions are marching again.

In Canada, the organizers of the Climate Strike in Montreal are expecting way over 150,000 to turn up (latest count is looking up towards half a million even). François Geoffroy, the spokesperson for La Planète S’invite au Parlement (LPSP), opened a pre-march press conference, by saying. “Nine months ago we launched a call, not just to march but to strike for the climate. In 40 years, no government has presented a credible transition program. Our trust is running out, and so is our patience.”

Ève Grenier Houde, from Fridays for Future, added: “We’re the ones who will live the worst case scenarios predicted by science. Our resources are limited. We need support from our parents, teachers and elected officials.” She urged the country’s leaders, including Justin Trudeau “to ensure our future.”

Also speaking were representatives from Canada’s First Nations. “Today, we gather like our ancestors, people of all ages and backgrounds, and we are here to protect Mother Earth,” said Cedric Gray-Lehoux, a member of the Mi’gmaq community of Listuguj and spokesperson for the Quebec-Labrador First Nations Youth Network.

“We’re all here for the same reason: We are sick and tired. Things must change.

Our voices as youth will not stop. We will be here, whether you like it or not, to make sure you hear our voices.” – Cédric Gray-Lehoux#MarchePourLeClimat #ClimateStrike #FridaysForFuture pic.twitter.com/Uq0kv1U04Y

Swedish activist, Greta Thunberg, who had met Justin Trudeau earlier this morning also spoke. When asked how the meeting with Trudeau had gone, Thunberg said: “Of course [Trudeau] has a lot of responsibility and he’s obviously not doing enough. Because this is a system that is wrong. My message to all the politicians is the same, just listen to the science, act on the science.”

Trudeau though, plans to join the march which is being led by a delegation of 15 Indigenous and 15 non-indigenous youth along with Thunberg. He has said he is joining to help “fight for the environment,” as climate change has emerged as a key issue for the election, to be held on 21 October.

Trudeau said, “There has been an extraordinary amount of mobilization by young people, and by Canadians across this country and indeed around the world, calling for real action on climate change.”

But people have been quick to point out Trudeau’s hypocrisy:

Reuters reported that Trudeau “had to defend his decision to buy and expand a major oil pipeline in western Canada.“ Others took to Twitter:

If this is true, we urge @JustinTrudeau to reconsider. This is not a “march “ it is a PROTEST. Against government inaction. And our priority will always be first with the frontlines indigenous activists and Chiefs who are coming to Montréal. https://t.co/A2yEjeiAX0

The expansion of the pipeline concerned, the Trans Mountain, would triple its capacity to 890,000 barrels of oil a day from Alberta’s oil sands to British Columbia’s Pacific coast. There have been years of protests against the expansion led by First Nations and local communities along with environmental groups.

Back in June, Trudeau announced the expansion of the pipeline, just days after Canada declared a climate emergency.

At the time, my colleague, Bronwen Tucker, from Oil Change International, said that approving the “pipeline one day after declaring climate emergency is like signing a peace treaty and then immediately detonating a $9.3 billion bomb. We know there is enough oil, gas, and coal in already-operating reserves to take us beyond safe limits of climate change, so we can’t afford to expand tar sands extraction any further.”

One second they declare a #ClimateEmergency and the next second they say yes to expand a pipeline.

This is shameful.
But of course this is not only in Canada, we can unfortunately see the same pattern everywhere…https://t.co/zVbWXnLBSQ