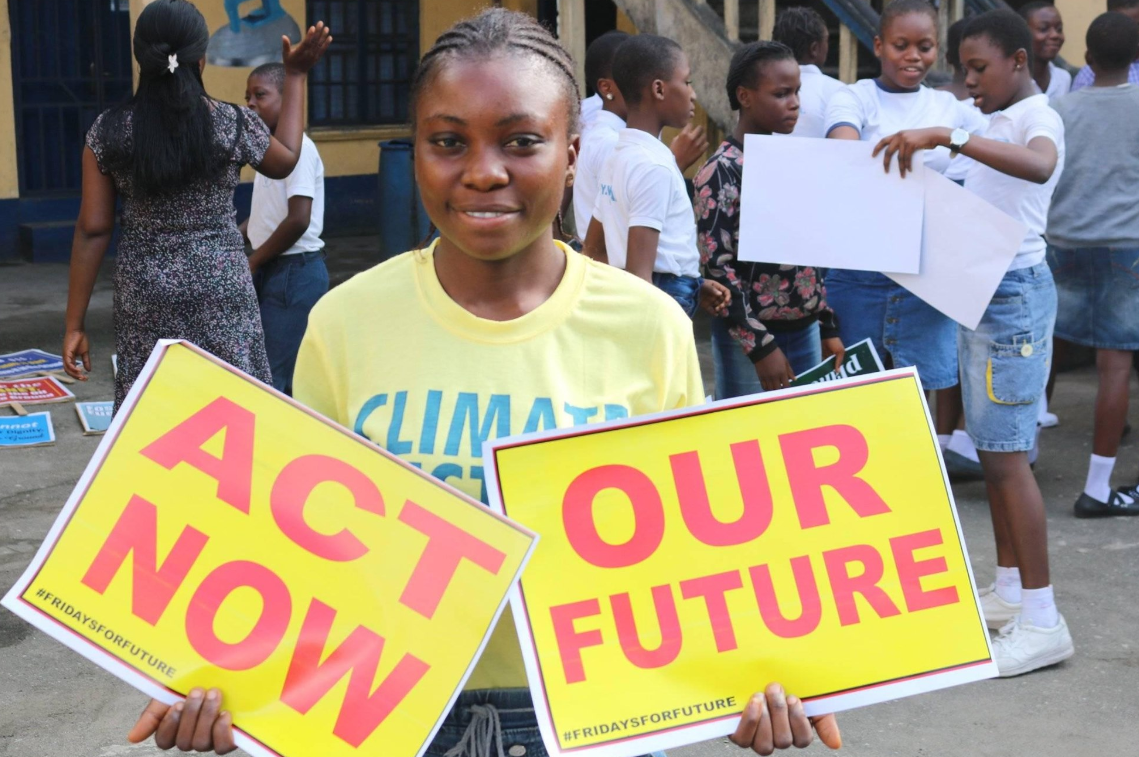 The numbers are staggering – the messages of hope and resistance amazing. One blog will never do justice to the history that is being written today. And it is still going on, as I write.

Millions of people are marching and striking in over 150 countries. Today is going to be the biggest climate protest in history. Today, we make history. And tomorrow will be different. Business as usual will be no more.

For the old timers, like myself, who have been writing on climate change for decades, and dreaming of a day like today, watching it unfold across the world, is a day of hope, of big smiles, of love and respect for those protesting. We can change the world. We can win.

We can build pressure before the UN general assembly next week on September 23rd and demand radical action to stop our climate emergency.

There are those who argue that the fight for the climate is lost. But by pouring onto the streets today, millions are voting with their feet: the fight is not lost, the fight will continue. We will protest until the climate war is won. We demand a liveable future. And an end to the oil age.

“Early numbers say 400’000 across Australia. 100’000 in Berlin. 100’000 in London. 50’000 in Hamburg. And preliminary number in Germany is 1,4 million people!!! But it’s beyond huge everywhere!!!! In every city. Every town. This picture is Sydney, Australia. Together we are changing the world. #fridaysforfuture #climatestrike”

As dawn broke over the Pacific on this day of days, the #ClimateStrike began. Numbers never witnessed before came out to demand action on climate change. To demand climate action. To demand a liveable future.

On Instagram, the young Pacific Climate Warriors, posted: “As the sun rises in the pacific, we rise to sound of the wind blowing, the calling of the Matagi M?lohi. Calling us all to action!”

Across in Vanuatu, often seen as one of the countries on the front-line of our sinking world, marchers sang “we are fighting, not drowning.”

In a ground-breaking announcement the Vanuatu government is set to announce that is prepared to take polluting “countries and corporations” to court over rising carbon emissions.

'No climate peace' – Vanuatu government will announce that is prepared to take polluting 'countries and corporations' to court to safeguard the lives of the people of Vanuatu. #ClimateStrike #ClimateEmergency pic.twitter.com/tbtJwavR2b

On the Solomon Islands, they marched on the beach.

Amazing photos coming in from the Solomon Islands where they’re kicking off the Global #ClimateStrikes. pic.twitter.com/Ul4SZ4XDWY

In Thailand, they headed for the Environment Ministry to demand a safe climate. “We’re young, but we’re not dumb. We know it’s happening. We need change. We demand better,” 11-year-old Ralyn ‘Lilly’ Satidtanasarn told The Bangkok Post.

Marches and actions were held across Pakistan and India. In Mumbai, they demanded action on the climate emergency and the planting of more trees.

In New Delhi, Asheer Kandhari, a student said: “I have come to this protest today because I live in the world’s most polluted city and our government is doing nothing to change that. Not taking action, a government doesn’t realise that they are taking away our futures. It’s my future that is being affected by the government’s inaction regarding the climate change policy.” 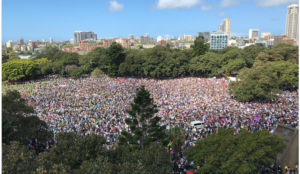 Actions, protests and strikes were also held across the country, with large turns outs in Hobart, Perth, Canberra and Brisbane, where crowds spilled down side streets. In Brisbane, commentators said it was the biggest rally in the city since the anti-war rally in 2003. Some people put the crowd at over 30,000.

Sixteen-year-old, Elizabeth Whitbread, attended the Canberra protest with a banner saying she was “hoping for a cooler death”. “I’m here because I want to live,” she said. “We all have the right to the life we set out to have. I don’t want to die young.”

In Alice Springs, where dozens of businesses shut for the day, there was a die in. Across Australia, thousands of business shut and over 30 unions took part. The “Knitting nanas” were out in force.

In Africa, protests, rallies and marches took place across the continent in Nigeria, Uganda, Kenya and South Africa, amongst others.

In the Niger Delta, where the fight against Big Oil has been at its bloodiest and most brutal, young students had a message of hope, demanding climate justice. (see photo above)

In South Africa, there were rallies across the country. Ayakha Melithafa, 17, from Cape Town, told the Guardian: “We’ll be marching to parliament to demand that the government take this issue seriously. It needs to declare a climate emergency here in South Africa, and a moratorium on coal, gas and oil mining licences. They have just ignored the problem so far.”

Meanwhile the numbers in Germany were unprecedented, with some 400 events. Nearly one million marched across the country: Over 270,000 in Berlin; 50,000 in Hamburg, 40,000 in Bremen; 20,000 in Düsseldorf and 30,000 in Freiburg. There were over 500 demonstrations across the country. In Berlin, standing under the iconic Brandenburg Gate, they chanted, “The time is now.”

There were also large protests in France and Belgium, and Poland, where King Coal still controls much of the country. Anuna De Wever, 18, a cofounder of Belgium’s school strike movement, said: “It was amazing, we had 20,000 across the streets. I am really happy about this strike because I feel like after coming on the streets after 20 weeks, this is our season two. There are so many people ready and it just makes me feel very hopeful.”

In London, 100,000 protested outside parliament. A colleague was so overwhelmed with the amazing spirit of the protests within minutes of arriving. Another said that having campaigned for years on the issue, she had never felt so optimistic.

Medics join tens of thousands of climate strikers in London. “The climate crisis is a health crisis… we are running out of time.” pic.twitter.com/pDXL7jF9OP

The Mayor of London, Sadiq Khan, told the thousands protesting: “I hope governments around the world who are failing to take action hear the voices of millions of people, young and old, unified in their call for action to save our planet. Our future depends on it.”

Meanwhile, in Manchester, the Mayor, Andy Burnham said: “My generation has failed you – and I include myself in that”. But then loud cheer greeted his declaration that “fracking is the past – it does not belong in the future.”

Fifteen year old, Archie Graham, said: “What’s the point in going to school if we can’t use that knowledge in the future because there won’t be a future for us.”

Meanwhile in the U.S., over 1100 events are planned. In DC, students shouted: “No more coal, no more oil, keep the carbon in the soil.” And “this is what democracy looks like.” The crowds are already said to be huge.  And they will only get bigger. They are now shouting “Do your job”, as they walk past Congress.

The youth are rising in Washington, DC for the #GlobalClimateStrike & demanding that leaders confront the climate crisis & stand up to the fossil fuel industry, NOW! #ClimateStrike #StrikeWithUs #FridaysForFuture pic.twitter.com/0XGbuet1CX

Shouts of "do your job!" as the DC #ClimateStrike converges at the Capitol

This is a powerful moment for an ascendant movement. Bet on people power. #ClimateStrike #ClimateStrikeDC #dcclimatestrike #FridaysForFuture pic.twitter.com/z4uAWouilG

We know the solutions to the climate crisis. We have to keep oil, gas, and coal in the ground. It is that simple. We can have a Green New Deal. We can have transformative radical action. And we will. Because we have the numbers on our side. Today we made history. The tide is turning. And we shall win.

There is still time to find a strike near you if you live in the U.S. Go here.