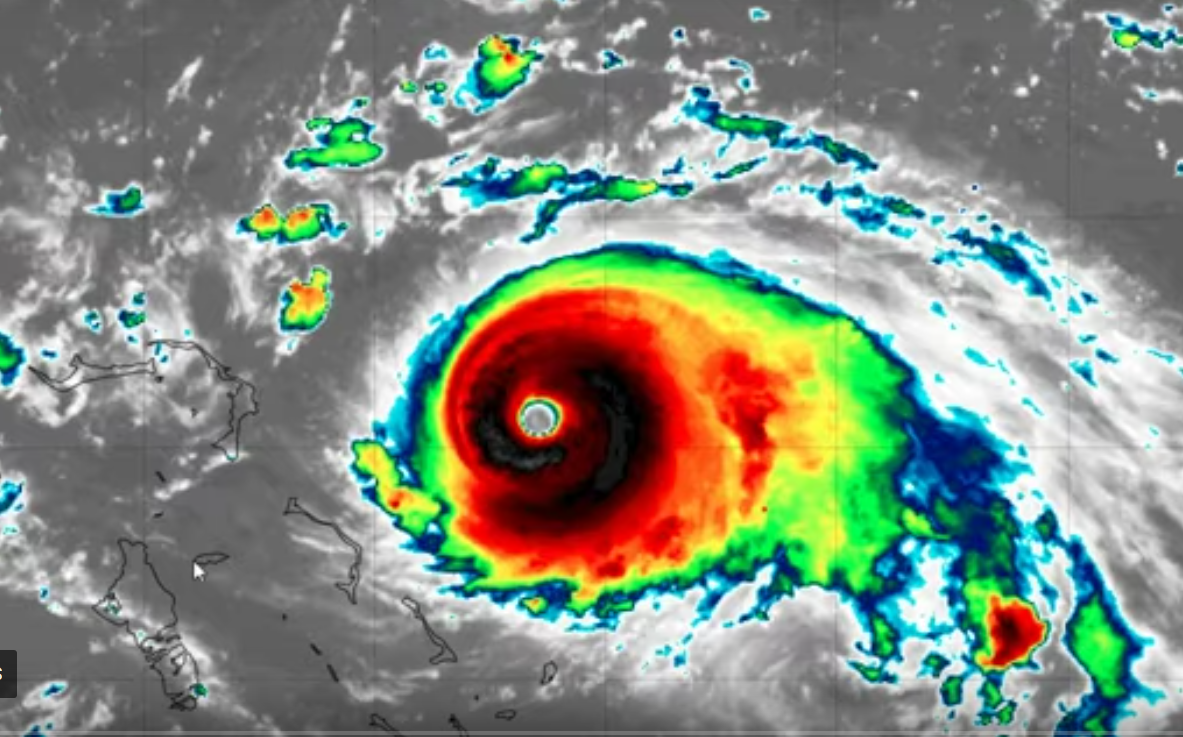 How much trouble do we need to be in, before we admit we are in trouble?

Parts of the US are braced for what could be one of the most destructive hurricanes to hit the east coast in over a quarter of a century.

Last night, the hurricane forced the states of Georgia and Carolina to issue evacuation orders. The State of Florida could also be hit later today or tomorrow. The Governor of Southern Carolina ordered the evacuation of the state’s whole coastline by 2pm today.

At the moment, Hurricane Dorian, named after the Greek God of the Sea, is still causing havoc in the Bahamas.

According to the NHC: “This is a life-threatening situation,” with reported wind gusts over 200 mph and a storm surge of up “to 23 feet above normal tide levels with higher destructive waves.”

The storm hit the island yesterday and has already shredded roofs, destroyed buildings and boats and downed power lines. Some 13,000 houses are said to be severely damaged or destroyed. One town of 6,000 people, Marsh Harbour, is said to be “underwater.”

The Prime Minister of the Bahamas, Hubert Minnis, said that in some areas of Marsh Harbour, “you cannot tell the difference as to the beginning of the street or where the ocean begins.” He added that the storm was “one that we have never seen in the history of the Bahamas.”

The first death caused by the destructive winds has tragically now been reported.

Although the NHC expects Dorian to gradually weaken and just has reclassified it from a category 5 to a category 4 storm, experts are once again saying this is climate change in action.

The intensity of the storm reflects our climate crisis. Before it was reclassified, the respected meteorologist, Eric Holthaus tweeted:

We are in a climate emergency. https://t.co/u9ob6vtWyb

Meanwhile, as is the way with Donald Trump, the President showed a distinct lack of leadership and understanding of geography, science and the facts when he wrongly stated the hurricane would hit Alabama. He added that he had “never even heard of a category 5 storm”, despite, as the Guardian newspaper pointing out, having said the same thing at least four times previously.

But Dorian is not the only indicator that we are in trouble.

All summer, there have been record fires in the Brazilian Amazon, Bolivian Amazon, and the Arctic. In Russia, the fires have reportedly already scorched 12 million hectares of land.

Our house is burning. We are on fire. Writing in today’s Guardian, Raoni Metuktire, chief of the indigenous Brazilian Kayapó people decries the destruction of the Amazon.

He writes: “You have to change the way you live because you are lost, you have lost your way. Where you are going is only the way of destruction and of death. To live you must respect the world, the trees, the plants, the animals, the rivers and even the very earth itself.”

Elsewhere, the news is equally alarming, with the Great Barrier Reef’s outlook recently officially downgraded from poor to very poor due to climate change. One of the great natural wonders of the world is dying on our watch.

As our climate emergency deepens, we still face a collective failure from our political leaders to act in a way that is in any way commensurate to the problem. Everything gets worse, but nothing changes.

Five years ago, the writer, and OCI Board member, Rebecca Solnit, drew parallels between 9/11 and our response to climate change.

She wrote: “Right now, you can think of the way we’re living as an office tower and the fossil fuel economy as a plane crashing into it in very, very, very slow motion. Flaming jet fuel is a pretty good analogy, in its own way, for what the burning of fossil fuel is doing, although the death and destruction are mostly happening in slow motion, too—except when people are drowning in Hurricane Sandy-style superstorms or burning in Australian firestorms or dying in European heat waves.”

She asked: “How do you convince someone who is stubbornly avoiding looking at the flames that the house is on fire?”

Her words are even truer today than five years ago.

People are now dying because of the Dorian superstorm and destruction of the Amazon. This summer our house has been on fire, literally burning. The science is screaming at us as the natural world spills out of control.

Indeed, how much trouble do we need to be in, before we admit we are in trouble?