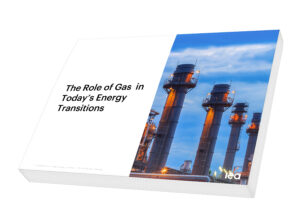 This is the second in a multi-part blog series critiquing the IEA’s special report, “The Role of Gas in Today’s Energy Transitions.” Part one discusses how the report shows that renewables and efficiency have played a larger role in cutting global (and U.S.) power sector emissions than gas. It also discussed how the economics of new gas-fired power plants is challenged by the ongoing cost declines for utility-scale wind, solar, and battery storage.

Here we look at the main policy prescription discussed in the report. The report makes a pitch for setting carbon pricing at a level that encourages coal-to-gas switching. Specifically, from coal-fired power plants to existing gas-fired plants. This is primarily focused on North America and Europe, where coal-fired capacity is generally older and less efficient than in Asia, and the utilization of gas-fired capacity is low.

Paradoxically, despite the report describing how new gas-fired power capacity is losing out to cheaper and cleaner technologies, and how there are more effective ways to reduce emissions than coal-to-gas switching, it’s key policy recommendation is coal-to-gas switching.

It’s hard not to see a connection here between the countries named as substantial funders of this report – leading gas exporter Norway, and emerging LNG player Canada – and the push for a swift fix to the global gas glut that is the result of the North American fracking boom. Am I being too cynical? Judge for yourself.

IEA is clear: New gas plants are a losing proposition

The main idea of the policy recommendation is that a carbon price in the U.S., or a higher one in the EU, would make it more expensive to run coal plants, and cheaper to run existing gas plants more often. This is based on the fact that gas plants are currently underutilized due to competition from renewables and coal.

According to the IEA’s calculations, the maximum potential of such switching would be a reduction in power sector emissions of about 1.2 Gt (gigatons or billion metric tons) per year. This is around 4% of global energy-related emissions. The report discusses these reductions as a short-term quick fix that could cut emissions while cheaper, cleaner renewables catch up.

The idea is an intriguing one because it stems from an admission that building new gas-fired power plants makes no sense from either an economic or emissions perspective. Coming from the IEA, this is a pretty big deal. Consider this statement from page 42 of the report:

The emissions reductions from coal-to-gas switching are significant, but beating the most carbon-intensive fuel is not in itself a persuasive case for gas if there are lower emissions and lower-cost alternatives to both fuels. The falling cost of renewable technologies in the power sector is the clearest case in point. In many markets, wind and solar PV are already among the cheapest options for new generation.

Moreover, the increased combustion of natural gas does not provide a long-term pathway to global climate objectives, so policy makers need to be wary about locking in gas-related emissions even as they reduce emissions from coal.

This sets up the basis for the main policy recommendation in the report. Renewable energy costs are falling, and gas does not cut emissions enough to make a real difference. So building new gas power plants is a losing proposition. Especially since doing so would lock in emissions due to the capital intensity of power plant investments. Therefore, the best “role for gas in today’s energy transition” is to increase its use in existing power plants. This requires carbon pricing because (ahem!) gas is expensive compared to coal in most countries.

Lock-in is not just for power plants

But the IEA’s recognition of lock-in, while refreshing, is precisely the reason why its short-term fix won’t work either. The report appears to acknowledge lock-in only in relation to power plants. Gas-fired power plants are indeed capital intensive and require long periods of operation to return investment. Therefore, once capital has been sunk, operation continues as long as revenues exceed marginal operating cost.

But this lock-in dynamic is similar for investments in gas extraction, pipelines, and LNG terminals. It takes billions of dollars in new infrastructure to deliver an increase in gas consumption. You can’t have one without the other. By stimulating the consumption of gas over the next decade, as the IEA proposes to do, billions of dollars of investment will lock in gas production for decades to come. Let’s look at some numbers.

The report states that, “(r)ealising the full global potential for switching would require an extra 450 billion cubic metres (bcm) of gas each year, some 12% of today’s global gas production.”  For U.S. and other readers used to talking about gas in cubic feet, that’s about 16 trillion cubic feet of gas per year. Let’s put that in context.

It sounds like a lot of gas, and it is. But funnily enough, it is equivalent to the projected growth in global gas production in the seven years from 2018 to 2025 (based on Rystad Energy projections, see chart below). So, the IEA has come up with a plan to soak up all the additional gas projected to be produced globally over the period in which the policy recommendation is supposed to be implemented.

Handy plan. Especially if you are a major or emerging gas exporter concerned that consumption is not rising fast enough to soak up all the gas you plan to produce. Not to mention the low prices that the glut is causing. (Did I mention that Norway and Canada funded this report?)

So the question is whether this is a genuinely useful way to lower emissions, or a convenient means to stimulate the market for gas. Are IEA member countries with gas resources to spare asserting undue influence on the organization’s gas policies? We think you have to get back to the basics of carbon budgets to understand the extent of the problem.

As we have shown in our series of Sky’s Limit reports, and in our Burning the Gas “Bridge Fuel” Myth report, existing fossil fuel extraction projects would already push us past the Paris goal of limiting climate change to 1.5°C. The bar on the left of the chart below shows the emissions that would result from burning the fossil fuel reserves in currently producing fields and mines (not counting the reserves that have not been tapped yet). But every oil and gas well that is drilled adds reserves to the left hand bar of the chart. Once those reserves are brought into production, it is much harder, economically, politically, and legally, to prevent their combustion, they are locked in.

While the reserves in currently producing projects would exhaust a 2°C budget, it is abundantly clear from current climate science that 2°C is no longer an acceptable target. The 2018 IPCC report shows the critical importance of the 1.5°C threshold. Limiting warming to this level – the more ambitious end of the Paris goals – would significantly reduce the risks of unstoppable runaway climate change.

It is clear the world cannot afford even to burn all of these developed reserves, let alone add more. It’s also clear that even if everyone stopped burning coal tomorrow, we would still have to leave some of the currently producing oil and gas in the ground.

The growth in gas production required to supply the IEA plan will necessitate an ever increasing number of wells to be drilled in order to replace depletion and grow production. The chart below shows that under current production plans, it will take until 2025 to add the IEA’s 16 trillion cubic feet of gas. It also shows that current business-as-usual projections suggest that gas production will keep growing through to the mid-2040s. This is an indication of the danger of continuing to stimulate demand for gas, and the potential to lock in long-term growth. 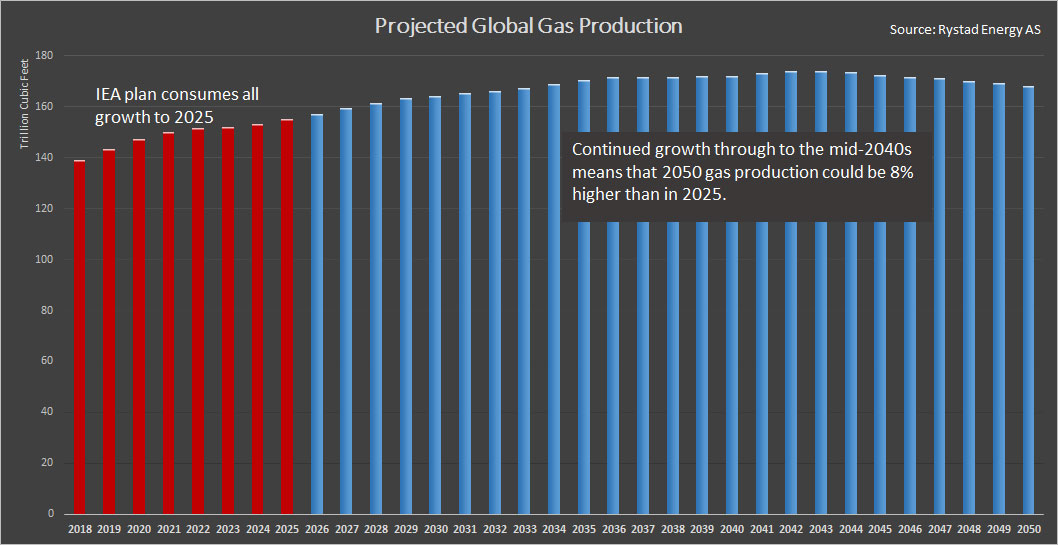 The next chart shows the increasing percentage of that production that will need to come from wells that have not been drilled yet. By 2025, 25% of global gas production will have to come from wells that are not drilled today. By 2030, 45% of projected global gas production would come from new wells. Given the implications of the carbon budget discussed above, it is hard to see how it makes sense to stimulate gas demand, and thereby production, in order to cut coal demand. We need to cut the coal consumption and replace it with zero carbon energy and efficiency. Anything else is a distraction.

The estimated 4% emissions reduction from this plan, which is anyway likely undermined by the IEA’s lowballing of methane impacts, pales in comparison to the emissions reductions we need to make. A look at the Intergovernmental Panel on Climate Change (IPCC) modelling of gas consumption compared to business-as-usual gas production makes this very clear. In the IPCC pathways that depend less on unproven negative emissions technologies (NETS), gas demand is in a steep decline from 2020. The declines for coal and oil in these pathways (not shown in the chart) are even steeper.* There is no room for an increase in gas production and consumption to achieve a 1.5C goal.

The IEA’s stubbornness in insisting that gas can play a role in reducing emissions despite the stark facts of the carbon budget is partly rooted in its faith in expensive and inadequate carbon capture technology. It also adheres to the idea that methane leakage is less problematic than it actually is, and that industry can be trusted to clean it up. We will briefly cover this and the issue of non-power sector gas use in a subsequent blog.

* For a summary of the IPCC pathways, see this handy graphic.

The first and fourth charts in this blog were taken from our Burning the Gas “Bridge Fuel” Myth report.  The other two were created for this blog.