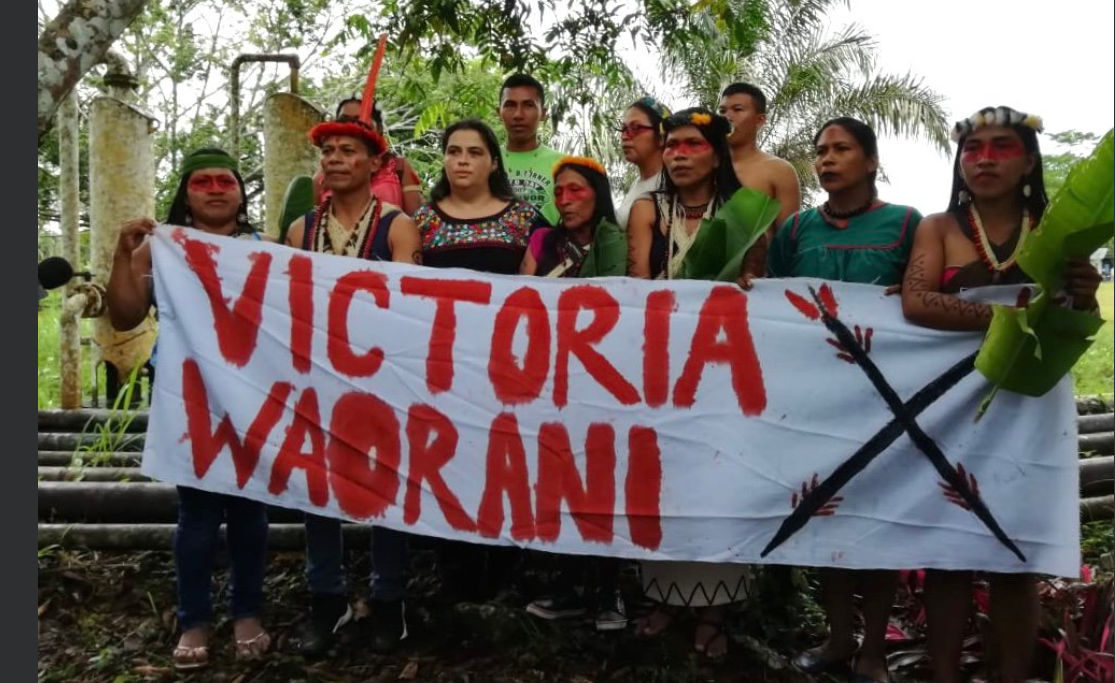 In the daily deluge of depressing news – from floods in New Orleans, to climate breakdown, and Trump’s ongoing assault on climate science, how about some good news for a change?

It is one of the longest battles between an Indigenous community and a Government to protect its land against oil; but last week, the Waorani people of Ecuador won a historic victory in court protecting half a million acres of their territory in the Amazon from oil drilling.

The ruling is the latest in a long legal battle between the two sides. The Waorani and other Indigenous tribes have fought the Ecuadorian Government and oil companies such as Texaco and Chevron for decades.

Indeed, it is over twenty five years since Judith Kimerling’s ground-breaking booklet Amazon Crude was published, detailing the devastation of oil in Ecuador by Texaco. If you have never read Joe Kane’s stunning book Savages on the shocking cultural impact of Amazonian oil, you should add it to your reading list.

The struggle between the communities and the Ecuadorian Government has often been fought over in the courts. The Ecuadorian government had appealed an earlier court ruling that the Waorani had not been adequately consulted over plans to auction their ancestral lands to oil companies.

But last week’s landmark decision indefinitely suspends the auctioning of Waorani land for oil drilling and potentially has massive knock-on effects: It puts into jeopardy the auctioning of a further 16 oil blocks that cover over 7 million acres of Indigenous territory across the whole of the Ecuadorian Amazon.

Nemonte Nenquimo, President of the Waorani Pastaza Organization (CONCONAWEP) and plaintiff in the lawsuit, said: “This victory is for my ancestors. It’s for our forest and future generations. And it’s for the whole world. We have shown that life is more important than oil and that united we can protect our way of life, the Amazon rainforest, and our planet from destruction.”

“The court’s final ruling states very clearly that our territory is our decision and it is not for sale!" – Nemonte Nenquimo, Waorani leader – @WaoResistencia

According to Amazon Frontlines, who were involved in the legal action “the decision on appeals represents a major set back for the Ecuadorian Government, and marks a watershed moment in the Indigenous movement to permanently protect their rainforest from oil drilling, and other extractive projects.”

Lina Maria Espinosa, a lawyer for the Waorani from Amazon Frontlines, said: “The appellate court’s verdict clearly confirms that the Waorani have the right to decide over their lives, their territory and their future.”

She added “And it shows that the Ecuadorian government has been systematically violating that right for decades. This is a precedent for Ecuador and the world.”

This legal action could have ramifications for a potential further 7 million acres of rainforest which were also auctioned at the same time – back in 2012.

Amazon Frontlines believe that this court ruling “should effectively nullify the entire prior consultation process undertaken by the government in 2012 and block the planned auction of 16 oil blocks across the South-Central Ecuadorian Amazon”. However, as yet the Ecuadorian Government shows no sign of stopping the auction of further blocks.

To this end, to try and make sure that the other seven million acres are preserved, Amazon Frontlines are gathering signatures. So far some 340,000 people have signed. To sign the petition go here.