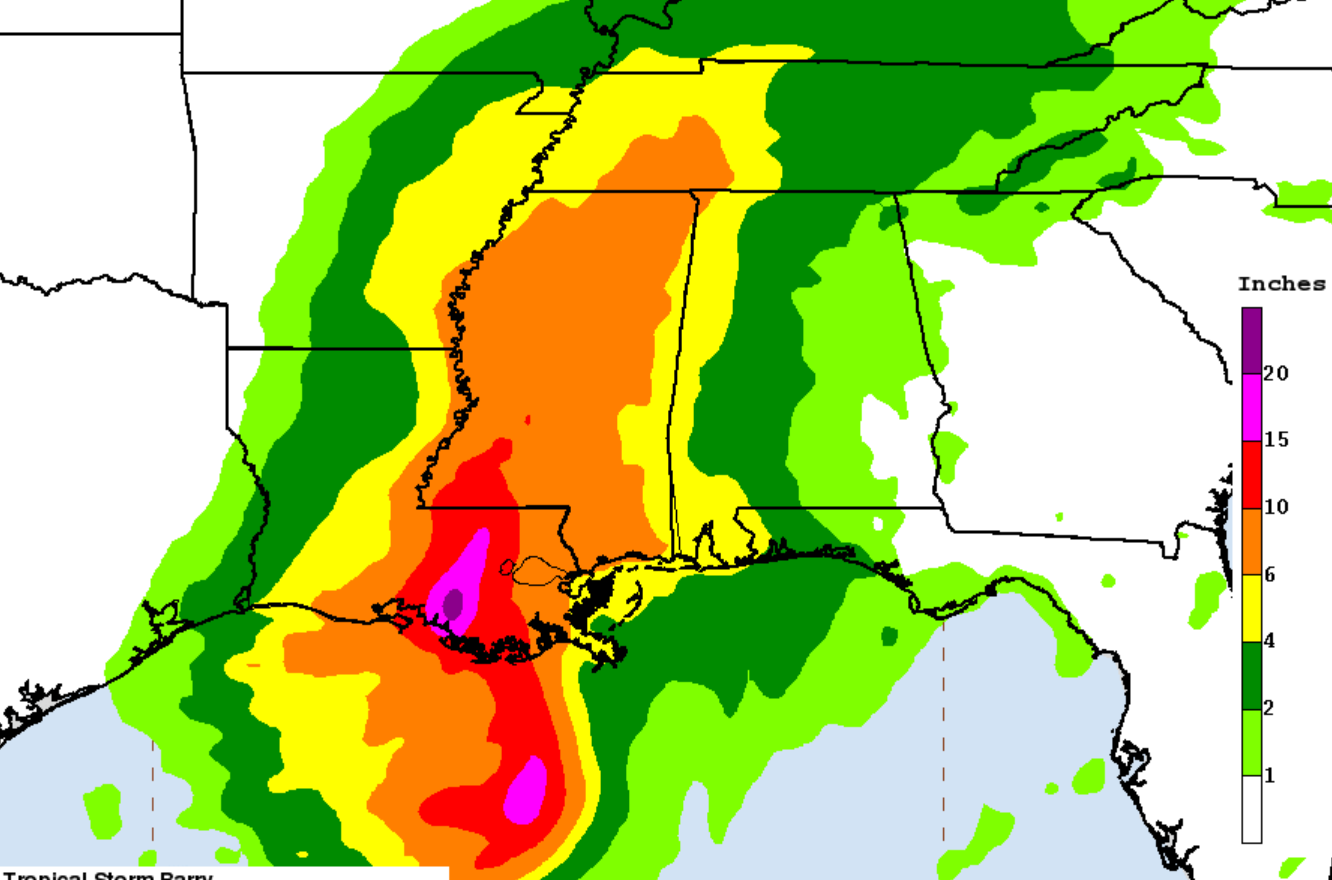 Is history about to repeat itself? Fourteen years after Hurricane Katrina swamped New Orleans and the coast of Louisiana, the region is bracing itself for Tropical Storm Barry.

It is only July, but already the US faces its first major storm of the season.

As the potentially devastating Tropical Storm Barry headed for the Louisiana coast last night, President Trump declared a State of Emergency, which frees up federal resources and money to help with the predicted catastrophic flooding.

To everyone on the Gulf Coast: As you make preparations to protect your homes & loved ones from flooding & the coming storm, it is imperative that you heed the directions of @FEMA, State & Local Officials. We are working closely w/ them. Please be prepared, be careful, & be SAFE!

According to the US National Hurricane Center, Barry is expected to produce total rain accumulations of anywhere between 10 to 25 inches over southeast Louisiana and southwest Mississippi. “These rains are expected to lead to dangerous, life-threatening flooding over portions of the central Gulf Coast into the Lower Mississippi Valley.”

To accompany the rains, “hurricane conditions” are expected in the areas tonight or tomorrow.

The situation in Louisiana is complicated by the fact that Barry is slow moving and the Louisiana river is already flooded, being some ten feet above normal summer levels, so the state’s residents face a triple whammy threat.

Indeed, New Orleanians are still mopping up floodwaters from earlier this week, and although the city may not be at the centre of the storm, the resulting flood waters could be devastating.

Jeffrey Graschel, a hydrologist with the National Weather Service told CNN: “This is the first time we’ve had a tropical system with water levels on the river this high.”

Louisiana Governor, John Bel Edwards warned the state’s residents that it was going to be “a very significant, severe weather event … There are three ways that Louisiana can flood; storm surge, high rivers, and rain. We’re going to have all three.”

Wow. NWS is placing #Barry on par with Harvey and Florence in terms of freshwater flood potential, two of the worst floods in recorded American history. https://t.co/WdGSA0IF16

At a press conference yesterday, New Orleans Mayor, LaToya Cantrell said: “There is a possibility that we’re going to get heavy rainfall for up to 48 hours … We cannot pump our way out of some of the flooding”.

Indeed, New Orleans may be better prepared than it was for Katrina, but for how much longer will the city’s defenses hold?

In an article in the New Republic, Eric Holthaus argued that “The dual threat of late-season river flooding and early-season hurricanes is a sign of things to come for our warming world.”

His uncompromising language warned about the potential that: “In recent years, extreme river floods have begun happening with increasing frequency as the spring rains arrive earlier each year as the atmosphere warms.”

Local officials fear the “worst-case scenario” where levees that protect the city “slide into the river”. He argues that “Depending on where exactly a breach occurred, it may not be possible to return the Mississippi River to its previous state. This would cripple America’s agricultural and petrochemical industries, deal a potentially fatal blow to New Orleans, and change the course of American history.”

New Orleans may survive this time, but Holthaus predicts that “the more carbon dioxide we pump into the atmosphere, the sooner our luck will run out.”

Peter Gleick, a Pacific Institute climate scientist, agrees about the risks of increased flooding in the region due to climate change. Tropical Storm Barry is “exactly a climate change story”, he says.

“What we’re saying is that climate change is increasingly influencing these very damaging events,” continues Gleick. “And it’s that influence that’s going to grow over time as we continue to fail to get climate change under control.”

Gleick adds: “New Orleans is not a place you want to be when these kinds of disasters strike. You can’t build levies everywhere high enough to protect against uncontrolled sea level rise.”