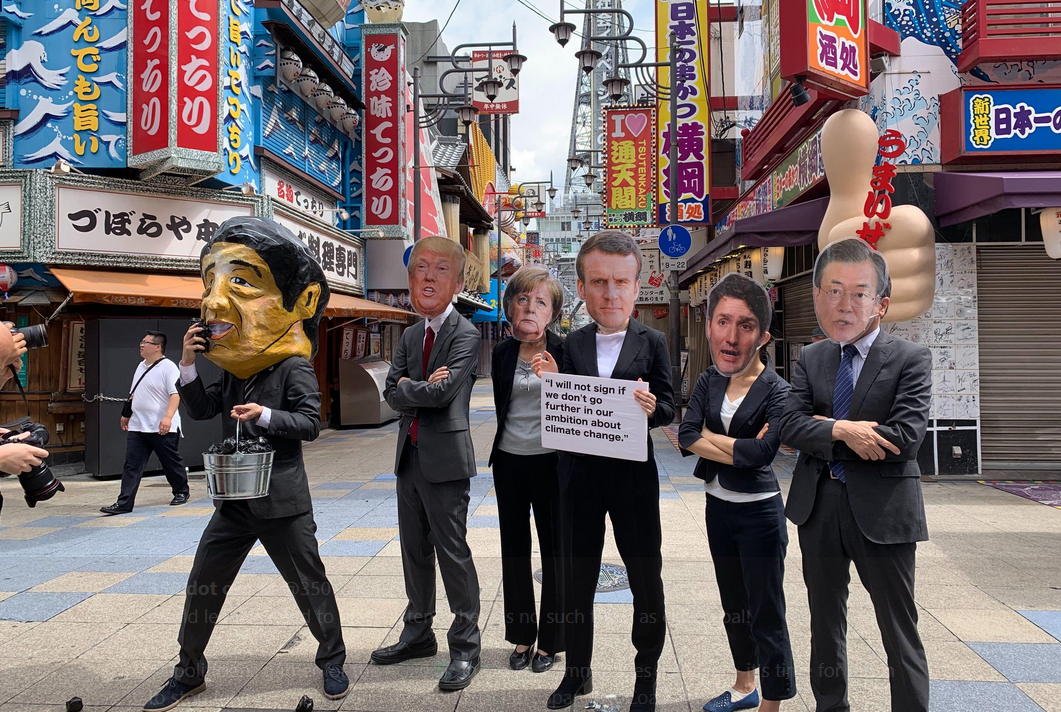 As the G20 drew to a close over the weekend, a communique was issued reiterating the Group’s supposed strong commitment to climate change.

Trump dismissed the need for action on climate, telling the end of Summit press conference that “We have the cleanest water we have ever had. We have the cleanest air we’ve ever had, but I’m not willing to sacrifice the tremendous power of what we’ve built up over a long period of time and what I’ve enhanced and revived.”

The President’s lack of a rudimentary understanding of science was noted by the Washington Post, which commented that Trump “at times appeared not to grasp the difference between global warming and air pollution.”

As host of the summit, Japanese Prime Minister Shinzo Abe had vowed “firm leadership” to tackle climate change, but instead merely defended a lackluster status quo on climate, while Japan continues to fund coal-fired power plants at home and abroad.

To coincide with the summit last week, thousands of activists from around the world – in Japan, Indonesia, India, the Philippines, Bangladesh, Pakistan, Australia, the US – mobilized to protest against Japan’s continued financing of dirty coal.

You know it's a #climateemergency when even Pokemons are taking to the streets to protest fossil fuel finance.#Pikachu #NoCoalJapan #G20 @g20org @AbeShinzo

In addition, over 80,000 people have signed a petition calling on Abe’s Government to stop funding coal projects at home and abroad – as well as lambasting other G20 governments for their systematic failure to end fossil fuel subsidies, despite committing ten years ago to do so. The petition was delivered in Japan, and also handed in to the Japanese Embassy in Washington.

The need for urgent action, and our growing climate emergency, are yet again reinforced by the news that large swathes of continental Europe are sweltering in the heat and France last week recorded its highest ever daytime temperature. Last month, Kuwait and Pakistan notched record temperatures, too.

Abe may have been trying to position himself as a climate leader, but he was greeted with the ignominy of a giant “Abe balloon” with the Prime Minister sitting atop a bucket of coal. The balloon was flown in Osaka, but it was beamed across the world’s media. The balloon and wider protests had one simple message for Abe: You can’t be a climate leader while at the same time promoting coal.

Other actions in Japan last week included activists wearing masks of the G20 leaders and handing out lumps of coal in Osaka.

The G20 leaders appeared in the middle of Osaka on the day of G20 Summit opening! @AbeShinzo still finances coal and the other leaders demand Japan phase-out coal! To be a true climate leader PM Abe should take effective measures against climate change! #NoCoalJapan pic.twitter.com/D7fjbjNzGI

Meanwhile in the Philippines, women gathered under the banner of “Women Rise for Climate Justice” and in Indonesia and Australia activists protested in front of the respected Japanese Embassies calling on the Japanese government to stop funding coal and fossil fuels.

Not to be outdone, some 20,000 people mobilized non-violently in India across 8 states and 75 cities, also demanding that the G20 governments act decisively on climate change and in the Philippines climate activists dressed in inflatable Pikachu costumes marched near the Japanese Embassy to call for Japan to stop financing coal.

The need for action was reinforced by a report by Oil Change International, the Overseas Development Institute, the Natural Resources Defense Council, and the International Institute for Sustainable Development which once again exposed the G20’s coal subsidies.

The report laid bare the hypocrisy of the G20: “Our analysis finds that G20 governments continue to support coal through US$27.6 billion in domestic and international public finance, US$15.4 billion in fiscal support, and US$20.9 billion in state-owned enterprise (SOE) investments per year across the G20.” It found that G20 government support for coal-fired power has nearly tripled over the past four years, even as private sector investors are fleeing the declining industry.

Despite, Japan’s so-called climate leadership, it remains one of the biggest providers of international coal finance. “This year’s G20 host, Japan, remains one of the largest providers of public finance for coal overseas (US$5.2 billion per year), which threatens to undermine the credibility of Japanese Prime Minister Shinzo Abe’s call for other governments to step up their action on climate change.”

Lidy Nacpil, Coordinator of the Asian People’s Movement on Debt and Development, one of the key groups involved in the protests, demanded that the G20 “fulfill their obligations to undertake urgent ambitious climate actions beginning with the immediate end to public subsidies for coal and fossil fuels.”

Susanne Wong, Senior Campaigner at Oil Change International, added that: “Over the last week, activists from Delhi to Manila to Canberra organized protests urging the Japanese government to demonstrate true climate leadership and end its support for coal.”

But the criticism about the lack of action on climate was coming from other quarters too. The president of the European Union Council, Donald Tusk, told Japanese Prime Minister Shinzo Abe “We need to step up to avoid the climate threats.”

Indeed, Abe needs to step up and stop financing coal, and be true to the words in the official G20 communique, which promised to “emphasize the importance of providing financial resources to assist developing countries with respect to both mitigation and adaptation in accordance with the Paris Agreement”.

That means stopping financing coal at home and abroad. To that if you want to take action, click here: