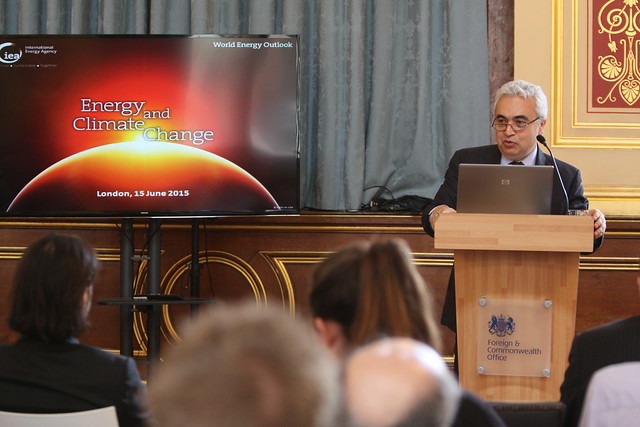 When it comes to making decisions on expensive and complex energy infrastructure, investors, governments, and companies look decades into the future. They want to know about the need, the risks, and the returns of new fossil fuel extraction, power generation, or energy transmission projects.

One place these economic and political actors look to for insights is the International Energy Agency (IEA), the world’s most authoritative source of energy analysis. The IEA’s flagship report, the World Energy Outlook (WEO), is the map which the world uses. The energy decisions of thousands of companies, investors and hundreds of countries are based, in part, on the WEO.

The principal scenario of WEO, about 80% of the influential report’s focus, is the New Policies Scenario (NPS). The NPS reflects energy demand and supply based on highly inadequate current and announced climate policies. These policies put us on track for global warming of 2.7°C to 3.3°C.

By placing the NPS central, this scenario becomes the de facto benchmark for energy decisions. The NPS calls for significant investment into oil and gas to meet the world’s growing energy demand – a key finding from the IEA’s 2019 World Energy Investment Report. However, between 78 and 96 percent—USD 11.2 to 13.8 trillion over 2018 to 2040—of the NPS’ recommended upstream oil and gas investment is incompatible when compared against the science-based goals of the Paris Agreement.

Unfortunately for action on climate change, the WEO has a strong status quo bias.

It perennially overestimates fossil fuel production and use and underestimates growth in energy efficiency and renewables. For example, the WEO 2018 New Policies Scenario (NPS) curiously predicts a production capacity decrease in solar energy, despite unprecedented growth and plummeting costs over the past decade. As the Energy Watch Group has pointed out, the IEA appears to assume that renewable energy is growing linearly (so annual additions are flat), whereas the trend – and the usual pattern in an early stage of technological development – is exponential. Aude Hoekstra of Eindhoven University of Technology has come to similar conclusions, as illustrated in the following graph. 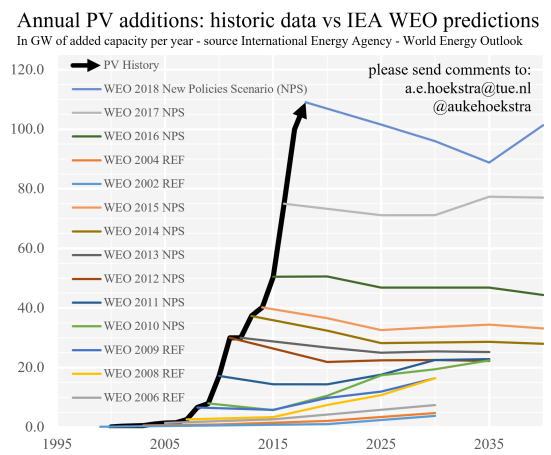 It may not come as a surprise which countries or companies are supportive of the NPS scenario. In Australia, federal and state governments have relied on the NPS to justify a massive expansion of thermal coal exports. In Alaska, the NPS was invoked to justify a leasing program that opened the Alaskan offshore arctic ocean to oil drilling. In Canada, the NPS informed policies that supported expansion of the Canadian tar sands, was used in government promotion material to minimize public opposition, and was cited by oil companies to justify tar sands expansion to shareholders.

Well-known climate laggard, Exxon, in its 2018 Financial and Operating Review, cited the NPS as requiring a spectacular $21 trillion in cumulative investment between 2018 and 2040 yet failed to mention the IEA’s Sustainable Development Scenario. Meanwhile, Canada’s upstream oil and gas industry association has cited IEA energy forecast as justification for more oil and gas production, as has the American Petroleum Institute.

Despite the fossil fuel industry and countries that are highly reliant on fossil fuel exports using the NPS as the lodestar for business as usual, a growing number of energy experts, investors and countries have serious concerns about the IEA’s map. As it currently stands, the NPS leads to a dystopic world of insecurity, suffering, and economic calamity. Most governments, investors, and companies would rather avoid this destination and are now mobilizing in unprecedented ways in an attempt to a secure, just, and prosperous future.

In April 2019, over 60 investors, politicians, and climate and energy experts wrote to the IEA urging them to develop a scenario that reflects the full ambition of the Paris Agreement. This means being clear that the NPS scenario represents an insufficient pace and scale of transformation.

It also means downgrading the prominence of this inadequate scenario and instead focusing on an enhanced Sustainable Development Scenario (SDS). This improved SDS should provide decision-makers with a roadmap that would give us a decent chance (i.e., 66%) of limiting warming to 1.5C and to take a more conservative approach to experimental negative emission technologies. See this other Oil Change blog post for more details on why the SDS also needs to improve from where it currently stands.

All of the IEA’s member states have signed the Paris Agreement with its necessary ambition to keep temperature increases “well below 2C and pursue efforts to limit to 1.5C.” There should be no debate about what benchmark to use moving forward. In addition, increasing numbers of World Energy Outlook users such as investors and climate and energy experts are advocating for increasing the ambition of IEA scenarios.

The NPS is out of touch with the changing reality of our carbon-constrained world. The IEA needs to move on from justifying business as usual for major polluters and ought to be demoted to a secondary status behind the goals of the Paris agreement.