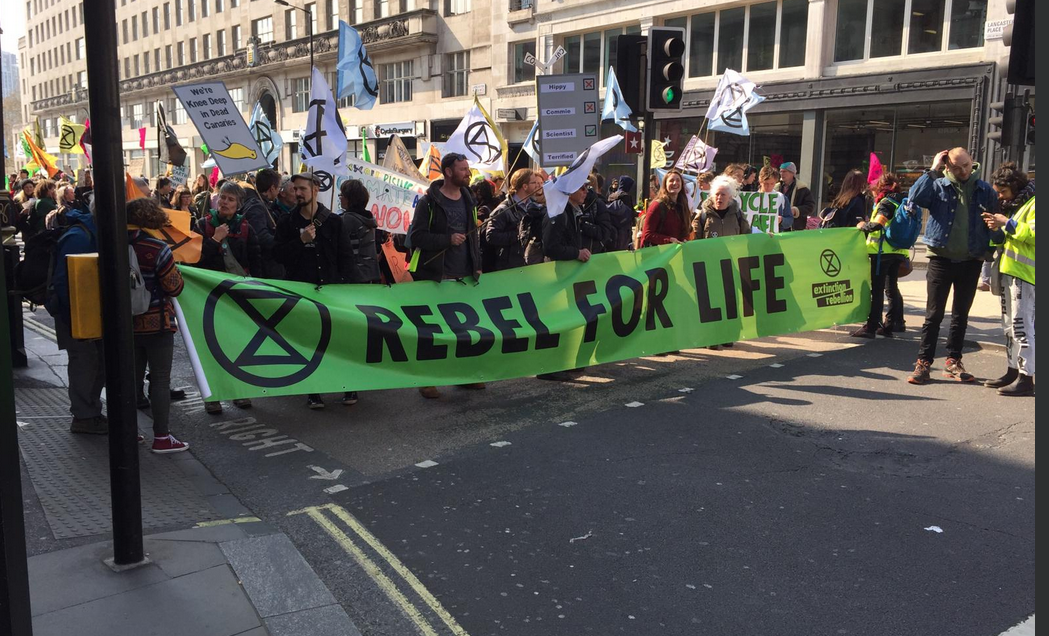 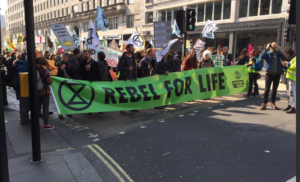 “Ladies and gentlemen, you have no idea what a pleasure it is to say…. WELCOME TO THE REBELLION!“

So said one of the speakers this morning in London, as thousands of people, from young and old, took part in the first major #InternationalRebellion week of action – a carnival of resistance on climate change.

The scenes from London of non violent protest are awe-inspiring as thousands demand urgent action to our climate emergency.

As I write, in London’s iconic Parliament Square, the so-called people’s assemblies have been discussing what action to take.

As Extinction Rebellion tweeted: “We have listened to the voice of the crowd and decided to take action.”

In Parliament Square, the people’s assemblies have finished for now. We have listened to the voice of the crowd and decided to take action.

Many were dressed up in creative costumes – from adults dressed as dancers or clowns, to kids as tigers or owls. Some preyed. Others played chess. People sewed or made banners. Everyone had fun.

Other iconic London landmarks were blocked too. Marble Arch, Piccadilly Circus and Hyde Park Corner have all been taken over by a sea of colourful protest. So too has Oxford Circus, where there was what one person called “peaceful creative conscious disruption”.

At one stage Oxford Circus was blocked off by a large pink yacht positioned in the middle of the Circus. It was emblazoned with the words: “Tell the truth”.

Meanwhile, Waterloo Bridge is currently traffic free. Hundreds of trees line the bridge. The bridge has been turned into a garden. Protesters were calling it the women’s bridge. There was also a skate park in the middle of the road too for the kids.

This is Waterloo Bridge. The women’s bridge. The Bridge of Waterloo Sunset. And it’s 100% traffic free. Come down! Bring plants, and water for the trees. #ExtinctionRebellion #ActNow pic.twitter.com/z2ggXbSCNI

Many people who have never protested before are taking action. As one protester tweeted:

“If someone a year ago had said I’d be off work to take part in this rebellion, I’d have laughed. The gravity of the situation only recently hit me and I know there’s no going back.

Tristan Hogg, MD, Pieminister. “If someone a year ago had said I’d be off work to take part in this rebellion, I’d have laughed. The gravity of the situation only recently hit me and I know there’s no going back.” #ExtinctionRebellion #HumansofXR pic.twitter.com/YI1mWnKu0U

Another tweeted: “Wow. Thought today I’d be sitting on an office sending emails but now I’m sitting in the middle of Park Lane with #ExtinctionRebellion . Feel like climate change is no longer a fringe issue. Amazing.”

Wow. Thought today I'd be sitting on an office sending emails but now I'm sitting in the middle of Park Lane with #ExtinctionRebellion . Feel like climate change is no longer a fringe issue. Amazing. pic.twitter.com/ivLQDC9lqR

One of those taking part was Manon, 18 “We need to stop #ClimateChange This is our planet, our future. This is really important to me. I came down from Wales: I’m planning on being here all week” #InternationalRebellion @XrYouth

Manon, 18 "We need to stop #ClimateChange This is our planet, our future. This is really important to me. I came down from Wales: I'm planning on being here all week"#InternationalRebellion @XrYouth

Whereas many people protested peacefully, others believe that the crisis demands more controversial action.

Earlier today, the side of the Shell Centre building in London was sprayed with words like “Shell Kills”, “Lies” and “Shell Knew” in reference to the fact that the oil giant knew about climate change for years.

A few activists super-glued themselves to the building. Regular readers of this blog will need no explanation as to why “Shell Kills” was written on the side of the building. Just ask the people of the Niger Delta.

Good luck to all mobilizing to end the #ClimateCrisis, already impacting the poorest & most vulnerable, esp in the global south. We must address historical & current injustices and dismantle dirty corporations like @Shell. We need #climatejustice & solidarity #ExtinctionRebellion pic.twitter.com/lN9lTBKBPT

According to Extinction Rebellion, Shell was targeted as the the oil company “has known of the effects of C02 pollution and its role in the current ecological catastrophe. Yet it has done nothing but cover up and deny the truth about fossil fuels and their effects on our atmosphere.”

One of those arrested at Shell was Katerina Hasapopoulos from Stroud, who said: Shell is already responsible for destroying lives in places like Nigeria. I’m taking action because our government is inept, Shell cares only for profit and I have three beautiful young girls who I want to see grow up to have a future. That looks unlikely as long as companies like Shell can act with impunity.

Simon Bramwell 47 an ex-builder and co-founder of Extinction Rebellion was glued to the door of Shell too. He said: How can we not act? It’s clear as day that we need to protect our communities, our rapidly vanishing nature and its just as clear that companies like Shell are responsible. They must be held accountable. We are trying to prevent crimes against humanity through our actions.

But it is not just London. The International rebellion has spread, with protests, marches, speeches, sit-ins taking place in some 80 cities in 39 countries. There have been other actions in Mexico, Spain and Australia.

Miriam Robinson from Extinction Rebellion Melbourne said: It’s time to declare a climate and ecological emergency. We are in the midst of the sixth mass extinction, but the government has been pouring billions of dollars into fossil fuel infrastructure – more gas hubs, ports, coal mines and roads, while sadly neglecting and degrading the natural world.

Meanwhile, in the Netherlands:

***BREAKING*** Six peaceful protesters arrested for carrying buckets of fake blood. We want to reiterate to @POL_DenHaag and @PaulineKrikke that we are non-violent peaceful protestors. #ExtinctionRebellion #RebelForLife #DeclarationofRebellion

***BREAKING*** Six peaceful protesters arrested for carrying buckets of fake blood. We want to reiterate to @POL_DenHaag and @PaulineKrikke that we are non-violent peaceful protestors. #ExtinctionRebellion #RebelForLife #DeclarationofRebellion pic.twitter.com/Xtm2SlfB9h

In Copenhagen, they blocked the Parliament, carrying a black coffin:

#ThisIsAnEmergency. Power to the thousands of #ConscientiousProtectors engaged in non-violent action around the world today & the peaceful protesters on the steps of the Parliament in Copenhagen. pic.twitter.com/IMmtHuPezu

In Brussels, they blocked the European Parliament:

Extinction Rebellion Belgium dead activists are blocking the city of Brussels in front of the @Europarl_EN SOON WE ARE ALL GOING TO BE EXTINCT IF WE DON'T ACT NOW #InternationalRebellion #WeekOfAction #ExtinctionRebellion pic.twitter.com/nqh7HEkvMR

In Oslo, they protested outside the Finance Ministry:

Ben Smoke, one the Stansted Fifteen, made the valid point that the systematic, systemic change needed on climate change more than just direct action: He wrote in the Guardian:

That so many people are involved and excited about activism is great – but we must be wary of glorifying arrests and incarceration as the only valid way of engaging with a movement .. It should be about as many people as possible being brought on board. About making noise from all parts of society that’s so deafening, there is no option for those in power but to listen to our demands.

That is the challenge for all of us. We need politicians to act. But we need everyone to act.

Back in Parliament Square the contributing editor of New Internationalist magazine, Jamie Kelsey Fry, said: This is not a political movement, this is a movement of humanity. We are all backgrounds, all ages, all races, bound together in one wish, one dream, which is that we will have a good, decent, loving future, for generations to come.

"This is not a political movement, this is a movement of humanity," says @JamieKelseyFry, as @ExtinctionR political gathering kicks off in Parliament Sq – one of four sites in Central London that they plan to hold until at least Wednesday pic.twitter.com/3eA7ZujW22