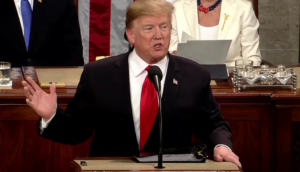 Do not be bamboozled by Donald’s forked tongue.

Last night, in his State of the Union address, he was full of talk of reconciliation and compromise and building a brighter future for all: “Together, we can break decades of political stalemate. We can bridge old divisions, heal old wounds, build new coalitions, forge new solutions, and unlock the extraordinary promise of America’s future. The decision is ours to make,” he said.

But every day, via his climate denial, he erodes that future.

In his landmark address, he failed to even mention the single most important issue of our time: climate change, a fact not lost on the Washington Post: “But absent amid the nativist demagoguery and partisan jockeying was any reference to the threat looming above all others: climate change, ” said the paper today, before noting “his inaction and indifference is already part of a broader political legacy likely to be remembered in decades to come.”

But Trump’s actions are worse than indifference and inaction. They are full throttle towards climate disaster by trying to burn as many fossil fuels as possible. Trump said: “We have unleashed a revolution in American Energy – the United States is now the number one producer of oil and natural gas in the world. And now, for the first time in 65 years, we are a net exporter of energy.”

In response, it is hardly surprising that David Turnbull, Strategic Communications Director at Oil Change USA, replied: “Trump may tout the surge in oil and gas production in the United States because his oil and gas boosters tell him to, but the reality is that continued expansion of the industry will lead us off the cliff and unleash climate chaos.”

Others were equally critical too: Greenpeace USA Chief Executive, Annie Leonard respondend: “Trump tried to erase climate change from tonight’s State of the Union, but you can’t erase a global crisis. Bragging about oil and gas production when global scientists are basically shouting from the rooftops to stop drilling and stop fracking is denial at its most dangerous level.”

That global climate crisis becomes ever more apparent by the day.

Today it was revealed by Trump’s own Government scientists that global temperatures last year were the fourth warmest on record. Gavin Schmidt, Director of Nasa’s Goddard Institute for Space Studies, said: “2018 is yet again an extremely warm year on top of a long-term global warming trend. The impacts of long-term global warming are already being felt – in coastal flooding, heat waves, intense precipitation and ecosystem change.”

Also today, the British Met Office predicted that we are in the middle of what is likely to be the warmest 10 years since records began in 1850.

Professor Adam Scaife, head of long term forecasting at the Met Office, told BBC News:  “We’ve just made this year’s forecasts and  … what they suggest is rapid warming globally. By looking at individual years in that forecast we can now see for the first time, there is a risk of a temporary, and I repeat temporary, exceedance of the all-important 1.5C threshold level set out in the Paris climate agreement.”

If that was not scary enough, two days ago, a landmark report highlighted how a third of the huge ice fields in the Himalaya could melt due to climate change, affecting almost 2 billion people. That is right: 2 billion people.

Philippus Wester of the International Centre for Integrated Mountain Development, who led the report, said: “This is the climate crisis you haven’t heard of. In the best of possible worlds, if we get really ambitious [in tackling climate change], even then we will lose one-third of the glaciers and be in trouble. That for us was the shocking finding.”

No wonder many haven’t heard of the climate crisis, because global leaders like Trump won’t mention it. And even if he does, Trump denies the problem exists at all. But its actually worse than that. Last night he was cheered by Republicans for actively driving us all over the climate cliff. As writer, Naomi Klein pointed out on Twitter:

People claim Trump said not one word about climate change but that's false. He celebrated the US being the world's "No. 1" oil and gas producer. And the house cheered – they cheered for the knowing destabilization of the planet. Don't call them deniers, they are arsonists.