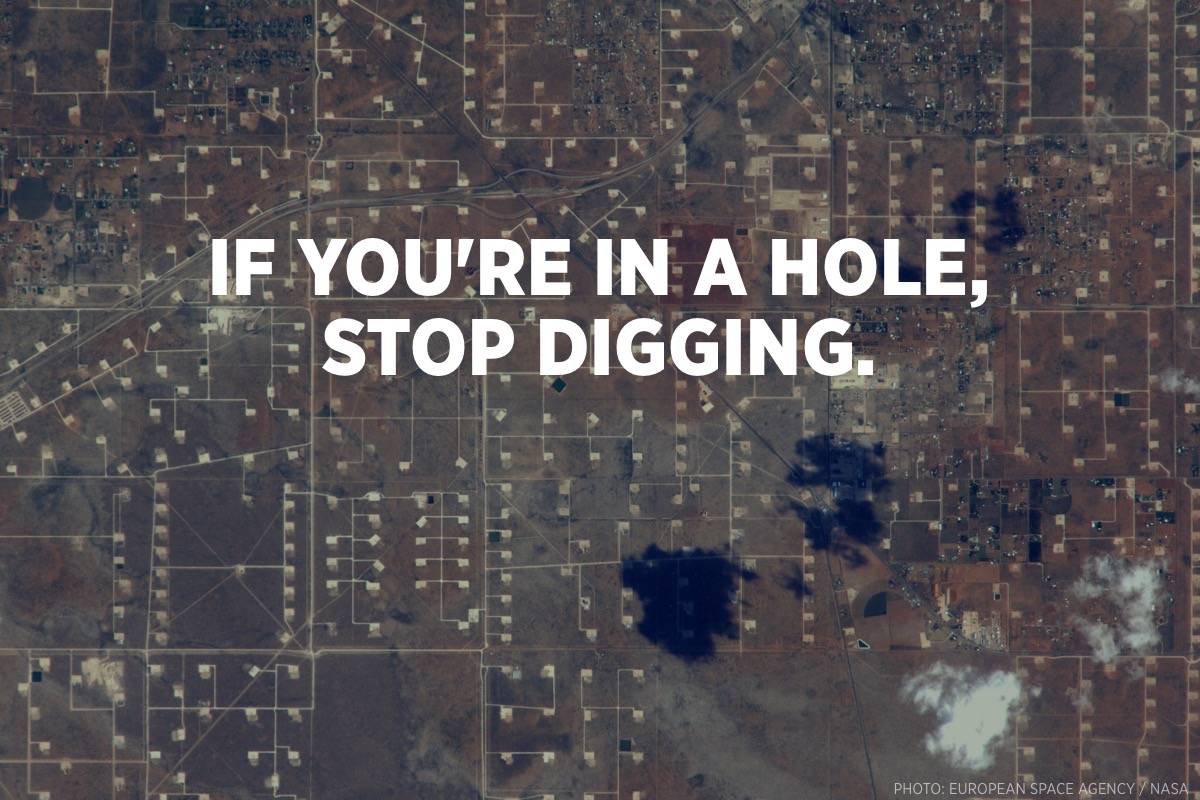 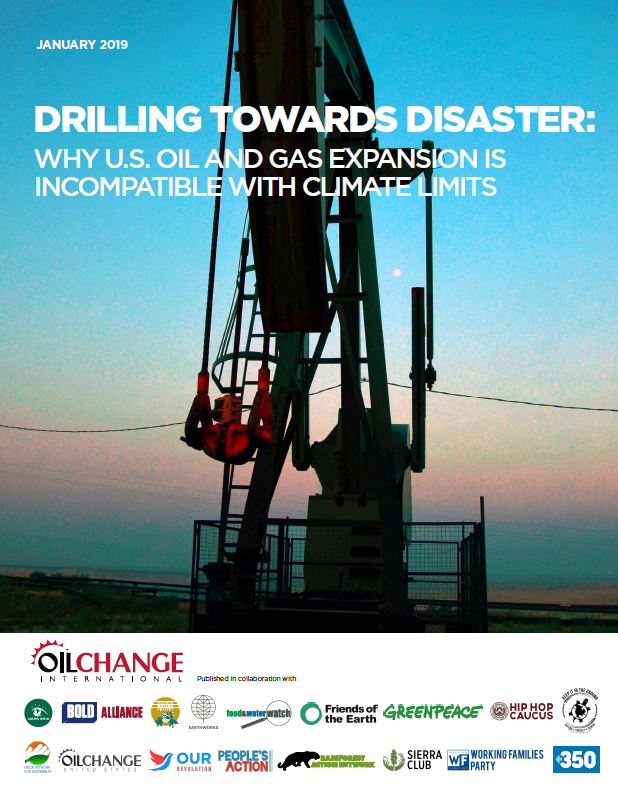 As the 116th Congress commences, in the wake of dire reports from climate scientists, the debate over U.S. climate policies has taken a welcome turn towards bold solutions. Spurred on by grassroots pressure from Indigenous communities, the youth-led Sunrise Movement, and communities from coast to coast fighting fossil fuel infrastructure, Capitol Hill is alive once again with policy proposals that edge towards the scale required to address the crisis we’re in.

Here’s a breakdown of what we find in the report:

Existing Fossil Fuel Projects Are Too Much Already

Previous analysis of the global disconnect between fossil fuel industry plans and climate goals underlies our U.S. report. Existing oil and gas fields and coal mines around the world already contain enough carbon to push the world beyond the goals of the Paris Agreement – and well beyond 1.5 degrees Celsius (°C) of temperature rise (Figure 1). There is already no room for new fossil fuel development anywhere in the world. Meeting the Paris Agreement goals requires stopping new exploration and extraction projects and managing the decline of the fossil fuel industry over the next few decades. 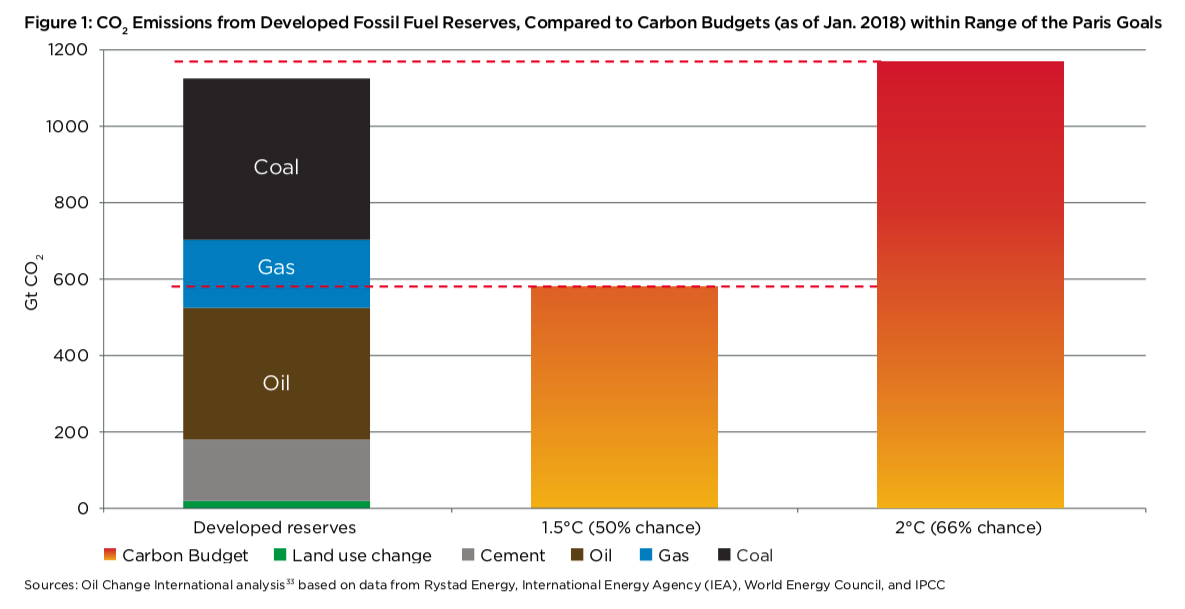 The United States, as one of the world’s largest extractors and emitters of fossil fuels – and as a wealthy country with the resources to manage a rapid and just transition to renewable energy – should be moving first and fastest to phase out fossil fuel production. Yet …

Our analysis shows that the United States is set to drive nearly 60 percent of global growth in oil and gas supply between now and 2030 – expanding production by four times the amount of any other country (Figure 4). By contrast, the Intergovernmental Panel on Climate Change (IPCC)’s recent Special Report on 1.5°C of Global Warming warns that the world needs to cut carbon emissions nearly in half by 2030 to keep warming within that limit. 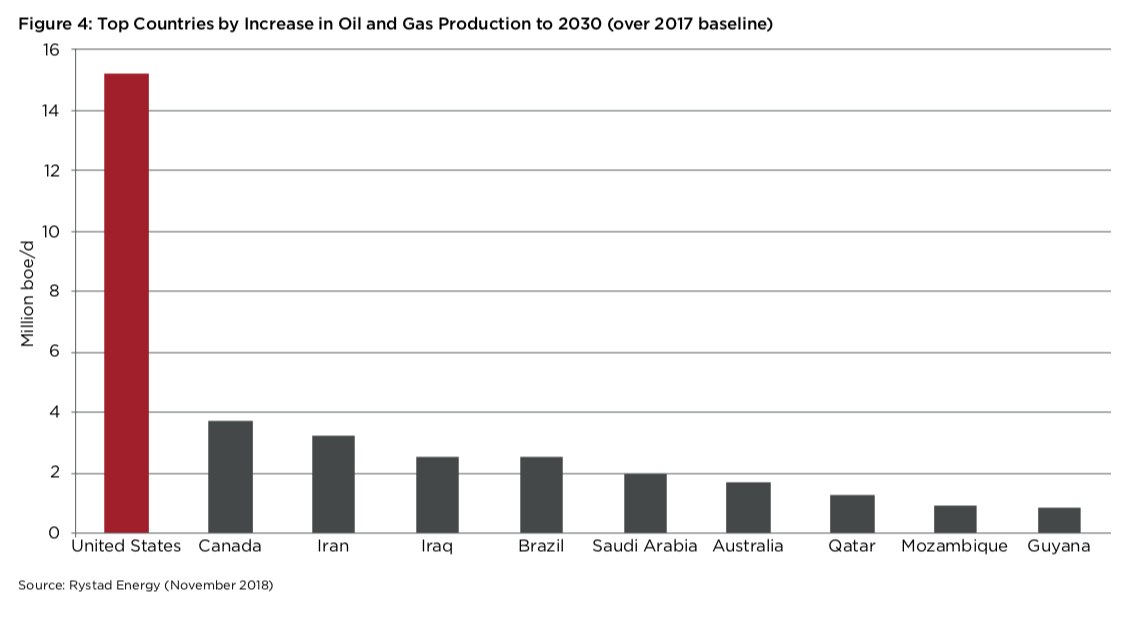 Between 2018 and 2050 – the timespan over which fossil fuel emissions should be zeroing out – new U.S. drilling projects could unleash 120 billion tons of new carbon pollution (Figure 5). If left unchecked, this would amount to the world’s largest burst of new carbon emissions from oil and gas development through 2050. It would be equivalent to the lifetime carbon pollution of nearly 1,000 average U.S. coal-fired power plants. 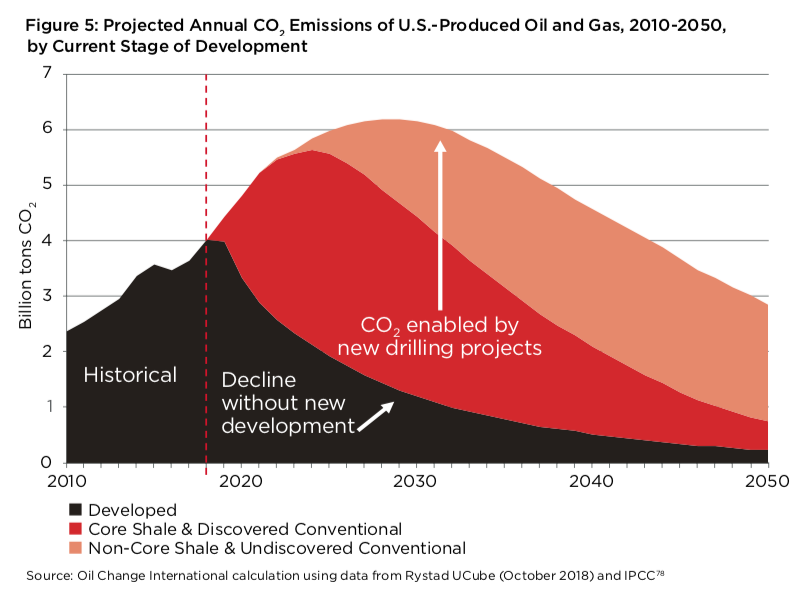 To summarize: At precisely the time when the world must rapidly decarbonize to avoid climate disaster, the United States is moving further and faster than any other country to expand oil and gas extraction.

If not stopped, this continued drilling spree would be a disaster not only for the climate but for communities on its front lines. Our analysis indicates that communities living atop and around the Permian Basin in Texas and New Mexico and the Appalachian Basin underlying Pennsylvania, Ohio, and West Virginia face the biggest onslaught of new drilling (Figure 9).

Upwards of 90 percent of the projected drilling expansion analyzed in our report would depend on fracking. This would bring with it more air and water pollution, health risks, heavy trucks taking over roadways, and growing competition for water. It would mean more dangerous pipelines threatening the sovereign land and water sources of Indigenous peoples. It would mean more communities being entangled in a volatile industry that has no viable future on a livable planet.

What Does Real Climate Leadership Require?

Over the past decade plus, community-led movements have come together across North America to fight new pipelines, fracking rigs, export terminals, and, increasingly, petrochemical plants. They’ve won crucial victories: Case in point, while still being pushed by its Canadian backers and the Trump administration, the Keystone XL pipeline still isn’t built.

But too few U.S. politicians have used their own power to stop this spread of fossil fuel infrastructure and extraction. This is a major reason the oil and gas industry is in a position to drill us towards climate disaster. The industry is riding high off of decades of compounding policy decisions to lease federal and state lands and waters for extraction, to approve permits for new wells, pipelines, and other infrastructure, to leave fracking woefully unregulated, to maintain billions of dollars in taxpayer-funded subsidies, and, at the end of 2015, to lift the four-decade-long ban on crude oil exports.

The United States is now the world’s largest oil and gas producer and, increasingly, dumping our excess oil and gas into global markets, which drives down prices and undermines policies aimed at reducing demand for fossil fuels.

This report should be a wake-up call for elected officials and policymakers at all levels of U.S. government who consider themselves to be climate leaders. Real climate leadership requires decisively saying “no” to further expansion of the fossil fuel industry while enthusiastically saying “yes” to a renewable energy transition on the pace and scale of a Green New Deal.

Our report distills this into a five-point checklist for U.S. officials:

Every decision around a new fossil fuel lease, permit, subsidy, or setback is an opportunity for U.S. politicians to stop fossil fuel expansion and champion a just transition to an economy powered by clean energy. The U.S. fossil fuel industry is gearing up to swing a giant wrecking ball through global climate goals. U.S. politicians cannot afford to stand by and let them … or worse yet, help swing it.