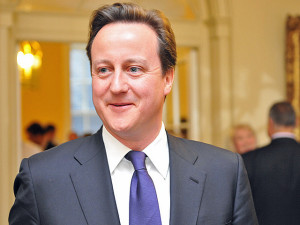 In 2006, the ex-British Prime Minister, David Cameron, famously went to the Arctic to see the effects of climate change for himself. Hugging a husky in the bright snowy landscape, he promised a greener Britain, warning that climate change was “one of the biggest threats facing the world”.

A few years later, Cameron said: “I want us to be the greenest Government ever. A very simple ambition and one that I am absolutely committed to achieve”.

We should know by now that it is foolish to believe what a politician says. By 2013, Cameron had reportedly told aides to “get rid of all that green crap” and his Government slashed solar subsidies by 65 per cent.

He pushed shale gas too, arguing that the the UK was going “all out for shale” and subsequently introduced powers to fast-track fracking applications.

Cameron may not be Prime Minister any more having fallen on his post-Brexit debacle sword, and since leaving office, he has largely kept a low profile.

But not any longer. Cameron is back and once again beating the pro-fracking drum, which has become one of the most contentious issues in the UK. Cameron is arguing that fracking is necessary for a post-Brexit UK, but it has been largely stopped by the “green movement” which is “obsessed” by the issue.

Talking as the keynote speaker at the American Fuel and Petrochemicals Manufacturers annual conference in San Antonio, Cameron said: “I passionately believe that there is big potential for fracking and unconventional gas in Britain, which has some shale reserves that could make a real difference.”

He added: “In the United States, there are 15,000- 16,000 shale wells. In Europe there are about 10 — this is pathetic. We are going to fall behind if we don’t extract the gas that we have that can make us more competitive, more energy independent, less reliant on Russian gas.”

According to Platts, he said: “We passed the laws, changed the planning rules, talked to the companies, changed the regulations, set out the bonuses communities would stand to get if wells went ahead, but it was painfully slow and incredibly frustrating.”

He moaned that “The green movements have become absolutely obsessed with the notion that any new form of energy that has any reliance on carbon is a bad thing, so they are just opposed to fracking, come what may.”

Cameron added: “Yes, we will do it because there is so much in our national interest, it just may take some time. What we need are some wells up and running where the local community can see that they are not that disruptive, that there are big financial benefits, that they can see an industry can build up around it.”

But Cameron is living in a parallel universe.

Not a single fracking well has been successfully drilled in the UK since 2011. Last year support for fracking fell to its lowest level – just 16%. In Scotland, over 99 per cent of those who responded to a Government consultation on the issue were opposed to fracking.

Moreover, an opinion poll for Friends of the Earth last year, which surveyed the views of residents of Lancashire, where fracking company Cuadrilla is hoping to frack in the near future, found that 66 per cent of residents opposed the move, with 46 per cent strongly opposed. Fracking was also deeply unpopular among Conservative voters – the people who Cameron used to represent – with 45 per cent opposed and 30 per cent supportive.

As Cameron still misguidedly hopes for a fracking boom, renewables in the UK continues to grow, with windfarms and solar panels producing more electricity than the UK’s eight nuclear power stations for the first time at the end of last year, according to official figures.

And still there’s not a husky in sight.