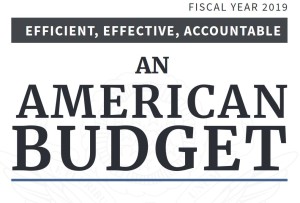 CNN derided Trump for living in a “parallel universe” over the budget, and condemned it for “creating a series of fiscal crises”; for “assuming wildly optimistic growth” and for making assumptions on growth and tax “that are at odds with what most economists expect.”

Maya MacGuineas, the Committee for a Responsible Federal Budget President, added in a statement that Trump’s “budget has too many gimmicks, exaggerated savings, and rosy assumptions. Most troubling, it doesn’t make the credible hard choices necessary to help bring the debt back to more manageable levels.”

Normally Republicans are fiscally conservative, but, as the New York Times points out, by adding nearly $1 trillion to the federal debt, the proposed “ballooning federal deficit … illustrates how far Republicans have strayed from their longtime embrace of balanced budgets.”

Despite being rejected last year he is trying to slash funding to the Environmental Protection Agency by some twenty five per cent to $42.8 billion, while “while eliminating virtually all climate change-related programs”, according to the Times. The plan would also cut the budget of the Office of Science and Technology nearly in half.

Elsewhere on climate and energy, Trump’s ideological sentiments are obvious too: As the Washington Post notes: “The administration wants to add money for overseeing the nation’s nuclear weapons stockpile and slash spending elsewhere, including science and renewable research.” This includes slashing the budget for the Office of Energy Efficiency and Renewable Energy, by 66 per cent.

The centerpiece of Trump’s budget is a plan to devote $200 billion over the next decade to tackle the American crumbling infrastructure, but here again critics widely condemned his proposals. The economist Paul Krugman called the plan “essentially fraudulent” and a “dog’s breakfast”.

Amongst its many flaws, this dog’s breakfast takes no account of our changing climate: Michael Kuby, a Professor of Geographical Sciences and Urban Planning at Arizona State University told the New York Times: “The impact of not considering climate change when planning infrastructure means you end up building the wrong thing, in the wrong place, to the wrong standards. That’s a whole lot of waste.”

Civil society groups also reacted angrily: The Center for American Progress attacked the infrastructure plan as a “scam to line the pockets of corporate polluters by gutting protections for our environment.”

And Oil Change International also criticised the plan as a scam which was “all about greasing the wheels for oil, gas and coal development.” A spokesperson said: “There’s a clear pattern with this administration – its policies are designed to take money out of the pockets of everyday Americans and give it to private corporations, wealthy investors, and Big Oil. Together with the tax scam, the Trump budget and infrastructure proposals are blueprints for how to bleed American families, towns and states dry while underwriting the profits of the fossil fuel industry.”