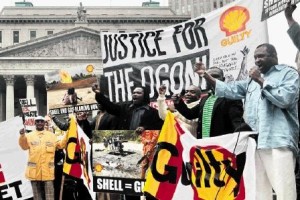 In 1995, on the final day of his trial for a crime he did not commit, Ken Saro-Wiwa’s formal closing statement, which he was prevented from delivering, said simply that “Shell’s day will surely come. The crime of the company’s dirty wars against the Ogoni people will be punished.”

Days later, on November 10 1995, Saro-Wiwa and eight other Ogoni were murdered by the Nigerian authorities. Their murder sent shock-waves around the world.

But their death’s were only the tip of the ice-berg of the human rights abuses levied against Saro-Wiwa and the Ogoni for their camapign against Shell’s rampant ecologist destruction and blatent double standards in the Niger Delta.

Today, some twenty two years later, Amnesty International is calling for an investigation into Shell’s complicity in “murder, rape and torture in Nigeria”, including the deaths of Saro-Wiwa and others.

The human rights group is asking Nigeria, the UK and the Netherlands to launch formal investigations into Shell role in a “swathe of horrific crimes committed by the Nigerian military government in the oil-producing Ogoniland region in the 1990s.”

In its report, entitled “A Criminal Enterprise?” based on a review of thousands of pages of internal company documents and witness statements, as well as Amnesty’s own archive from the period, the human right’s group argues that “the evidence raises serious questions about the extent of Shell’s involvement not just in gross violations but also in criminal conduct.”

I and many others have repeatedly written about Shell’s collusion with the Nigerian military since the early nineties, and how they tried to manipulate the truth of what happened, so Amnesty’s report is a hugely welcome development for anyone who cares about social justice and holding big oil accountable for thier actions.

Ever since 1996, we have known that Shell paid the field allowances and provided logistical support for the military as it brutally suppressed dissent in the Delta, but somehow Shell has always tried to deny the allegations and of colluding with the military.

In its highly damning report, Amnesty argues that “There is irrefutable evidence that Shell knew that the Nigerian security forces committed grave violations when they were deployed to address community protests”, and that “Shell provided the security forces with logistical support and payments as a matter of routine during the 1990s.”

For example, in 1990, an estimated ninety people were killed at Umuechem after the mobile police force (MPF) were called in by Shell to counter community unrest. Even though Shell would repeadely ask for assistance from the MPF or military after this date, “It is clear from both public statements and internal company documents that at least from this point on Shell executives knew and understood the risks associated with calling for the intervention of the security forces in dealing with protestors.”

The report outlines how: “Shell’s knowledge went beyond widely reported events. Executives met regularly with top government officials, and discussed the government strategy for dealing with the Ogoni protests. Shell had close links with Nigeria’s internal security agency. Shell’s former head of security for the region gave a witness statement saying that he shared information with the agency on a daily basis.”

Shell knew that by calling in the military to suppress dissent there would be serious human rights violations. Despite this “Shell encouraged and solicited the intervention of the Nigerian security forces and the military authorities. In 1993, Shell repeatedly asked the Nigerian government to deploy the army to Ogoniland to prevent protests from disrupting” the laying of a key pipeline.

Even after protestors from Ogoni were then shot by the authorities, based on the notes of minutes of meetings with Government officials, “Shell executives did not raise any concern with the government officials about the recent shooting of unarmed protesters in Ogoniland by the army unit guarding the pipeline.”

Indeed, argues Amnesty: “all of the evidence indicates that Shell was well aware that MOSOP has a legitimate grievance and that the environment on which the Ogoni’s were almost completely dependent was in fact devastated by oil pollution. Yet at no point on record did Shell suggest to its various government and military interlocutors alternative ways of dealing with the concerns of the Ogoni people and MOSOP.”

Rather than try and stop the violence against the Ogoni by the military, Shell “knowingly provided encouragement and motivation to the military authorities to stop the MOSOP protests, even after the authorities repeatedly committed human rights violations in Ogoniland and specifically targeted Ken Saro-Wiwa and MOSOP,” outlines the report.

By raising “Ken Saro-Wiwa and MOSOP as a problem, Shell was reckless, and significantly exacerbated the risk to Saro-Wiwa and those linked to MOSOP,” argues Amnesty

Shell later claimed that it worked behind the scenes to advocate for the release of Ken Saro-Wiwa and the other men, yet Amnesty “has seen no evidence of this in the many internal Shell documents from the period.”

Having studied the many faxes, letters and emails sent between different offices, including regular “Nigeria Updates” sent from Nigeria to Europe, Amnesty concurs that “at all times, Shell’s directors based in The Hague and London were fully aware of what was happening in Nigeria and what the staff of Shell Nigeria were up to. The evidence also makes clear that staff in London and The Hague were not passive recipients of this information. A clear directing role is evident.”

At the end of the report, Amensty concludes that: “Shell and specific executives should face investigation, with a view to prosecution, over their involvement in the crimes committed in Ogoniland in the 1990s.”

This is because “Shell repeatedly encouraged the Nigerian military and police to take action to deal with community protests when the company knew this put lives at risk. Even when the risks came to fruition, and hundreds of Ogoni women, men and children had been killed or assaulted, Shell went back to the military and asked for their engagement.”

It continues: “Although there is no evidence that Shell asked the military or police to execute or assault people, the company asked them to act when it knew that extrajudicial executions and assault were the likely outcome.”

Amnesty is asking the governments of Nigeria and Shell’s home states, the Netherlands and UK to “investigate, with a view to prosecution, Shell and/or individuals, who were formerly in decision-making or supervisory positions within the company, for potential involvement in crimes linked to human rights violations committed by the Nigerian security forces in Ogoniland in the 1990s.”

Amnesty wrote to Shell to respond to the allegations. Shell Nigeria responded, like it has always done by obfuscating the truth: “Shell Nigeria “did not collude with the military authorities to suppress community unrest and in no way encouraged or advocated any acts of violence in Nigeria.”

Mark Dummett, a researcher for Amnesty who helped compile the report, argues: “The fact Shell was running a shady undercover unit and then passing on information to the Nigerian security agency is incredibly disturbing.”

He added: “The revelations show how close and insidious the relationship was between the oil company and the Nigerian state, and Shell has serious questions to answer.”

Audrey Gaughran, Director of Global Issues at Amnesty, adds: “The evidence we have reviewed shows that Shell repeatedly encouraged the Nigerian military to deal with community protests, even when it knew the horrors this would lead to – unlawful killings, rape, torture, the burning of villages.”

“We will now be preparing a criminal file to submit to the relevant authorities, with a view to prosecution … Justice must be done – for Ken Saro-Wiwa and for the thousands of others whose lives were ruined by Shell’s destruction of Ogoniland.”

Finally, you know that Ken Saro-Wiwa’s son, Ken Wiwa, would have welcomed this development. Sadly he died just over a year ago.

Writing on the 20th Anniversary of his father’s death in 2015, Ken Wiwa finished by saying: “Sometimes it seems as if 10 November 1995 was another era. In some ways it was, and in others it feels like it was just yesterday. Between the disabling nature of his death and the enabling tests of time, one thought still sustains me: it is the old idea that the arc of the moral universe may be long, but it still bends towards justice.”

As Amnesty says it is finally time for justice to be served. It is time for Shell to have its day in court.