The irony was not lost on the thousands of protesters who marched through the streets of Bonn this past weekend, or the 4,000 more who shut down operations at Europe’s largest open-pit coal mine just 50 kilometers away on Sunday: even as Germany presents itself as a climate leader on the world stage, and hosts the 23rd annual United Nations climate conference (COP) in Bonn, Germany continues to support levels of fossil fuel production and finance that undermine global climate action.

This paradox is explored in detail in a new report, “Time to Stop Digging: Why German Climate Leadership Requires a Rapid Phaseout of Fossil Fuel Production and Finance,” released today by Oil Change International in partnership with 350.org.

The report shows that, if Germany is truly committed to being a leader in meeting the goals of the Paris Agreement, the country must:

In other words, Germany must literally stop digging the world into a deeper hole of fossil fuel pollution. As it stands now, despite being an early mover toward renewable energy, Germany remains the world’s leading producer of lignite, the dirtiest form of coal to burn for power (see Figure 1). Germany has not yet made a serious plan to phase out its lignite mining sector, which is a key reason the country is the European Union’s top climate polluter and is headed for a “spectacular miss” in meeting its domestic climate goals.

Meanwhile, Germany’s public finance for fossil fuel expansion abroad was 50% greater than its public finance for clean energy abroad over the past three years (see Figure 2). Even after the Paris Agreement was struck in 2015, Germany poured billions of new dollars into fossil fuels – almost entirely oil and gas – beyond its borders. Adding insult to injury, Germany’s public finance for oil, gas, and coal is, on average, five times as much as the entire world spends to support climate change adaptation in small island developing states such as Fiji. This has to change.

As delegates in Bonn discuss how to meet the goals of the 2015 Paris Agreement – to limit global average temperature rise to well below 2 degrees Celsius, and to strive to limit it to 1.5 degrees Celsius – Germany is exactly the type of country that must step up. But the country’s historical focus on supporting renewable energy and setting goals for reducing end-of-pipe emissions (a.k.a. demand-side policies) won’t cut it. As we argue in our new report, we need to redefine what climate leadership looks like, and that must include tackling the problem from both critical sides: fossil fuel supply and demand.

It’s important to zoom out to the global text to understand why this other pillar of action – tackling fossil fuel supply, or the amount of coal, oil, and gas we dig out of the ground – is critical. Oil Change International’s 2016 report, “The Sky’s Limit: Why the Paris Climate Goals Require a Managed Decline of Fossil Fuel Production,” lays it bare. The world has a finite and dwindling carbon budget to stay within agreed upon climate limits. Currently operating mines and fields around the world already contain significantly more coal, oil, and gas than the world can afford to burn to stay within 2 degrees Celsius of warming – and far more than we can afford for a 1.5 degrees Celsius limit (see Figure 3).

Practically, this means that achieving the Paris Agreement means ending the expansion of the fossil fuel industry, coupled with a managed and just transition off of existing fossil fuel production. Some coal mines and oil and gas fields will need to be shut down early, before their reserves are fully extracted. Morally, this managed decline must be led by those countries – like Germany – with the means to act first and fastest. 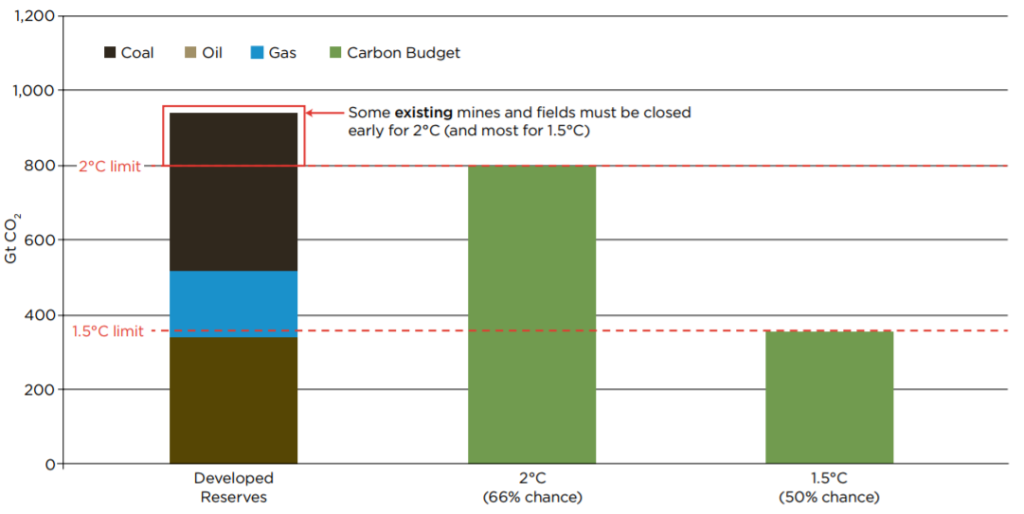 Germany is one of only a handful of countries, alongside Australia and the U.S., that are both highly developed and leading producers of coal. Rich coal producers like Germany have the least economic need for continued fossil fuel extraction, and also the greatest capacity to move first in shutting down existing coal mines to stay within the global carbon budget shown above. As we explain in the report (see “Why Should Germany Stop Mining Before Some Other Countries?,” pp. 13-14), Germany’s challenges in phasing out coal are more surmountable in every way than those of less developed, less wealthy countries.

For example, assuming each coal producing country moves at an equivalent pace in transitioning its mining workforce, China would need twenty times as long as Germany to exit coal. If you consider that the world must reduce emissions to zero within the next 25 to 50 years, that means Germany would need to phase out coal mining within a year or two. While a year or two is not practical, Germany has shown it has the capacity to move fast. Germany decided to phase out hard coal mining in 2007 – when there were 32,000 miners – and set a timeframe of 11 years. With fewer workers (20,000), and greater climate urgency, the lignite phaseout should be significantly faster: in less than 10 years. If Germany cannot manage a rapid exit from coal, it begs the question of who else among the world’s leading coal producers will. And if no-one shuts existing coal mines (or oil or gas fields), the world cannot achieve the Paris goals, as we’ve seen in Figure 3.

While Germany is hosting this year’s COP, it’s the small island nation of Fiji that holds this year’s COP presidency. Pacific climate warriors were among those who shut down Germany’s largest lignite mine over the weekend. For them, such action is a matter of survival.

The Warriors are at the edge of a giant coal mine in Germany. Hearts are heavy but strong. #HaveYourSei pic.twitter.com/DzlIES8jr3

“Germany’s coal mining exports destruction to the Pacific and the world,” warns George Nacewa, a Climate Warrior from the Fiji Islands. “In order to give Pacific Islands a fighting chance for survival, the future must be one powered by renewable energy and free of fossil fuels.”

Germany has the ambition, capacity, and resources to lead the way toward this better future. Now it’s time for Germany to decide once and for all: Will it earn the title of ‘climate leader’ through bold and decisive action to phase out its fossil fuel production and finance? Or will it remain one of the world’s last wealthy ‘coal champions,’ leading the world over the brink of climate catastrophe?