In total, U.S. public finance for fossil fuels from bilateral and multilateral sources averaged $2.1 billion annually between 2015 and 2016. Figure 1 below shows the breakdown of this fossil fuel finance across institutions.

The biggest changes from previous years result from a decline in fossil fuel financing by the U.S. Export Import Bank (ExIm), the official export credit agency of the U.S. In 2016, ExIm commitments to fossil fuel-related projects were substantially lower than in 2015, likely in large part because ExIm lacked board quorum for much of 2016, and therefore authorized less than $5 billion in total financing across all sectors, compared to over $20 billion in 2014, the last year in which ExIm was fully operational.1 It is possible – and perhaps likely – that if ExIm achieves a board quorum and returns to its previous levels of operation, fossil fuel finance will again increase to past levels. While ExIm has policies in place that would limit greenhouse gas emissions resulting from its financing commitments, implementation of those restrictions have been uneven in recent years as a result of legislative maneuvers that prevent ExIm from using resources to implement such policies. Irrespective of Trump Administration decrees and legislative action, ExIm is bound by the OECD Arrangement on Officially-Supported Export Credits, which includes a provision that restricts finance for certain types of coal-fired power plants. The United States cannot unilaterally revise these provisions.

In 2016, commitments for fossil fuel projects from the Overseas Private Investment Corporation (OPIC), the U.S. development finance institution, decreased to nearly 60% of 2015 levels. It is not clear whether this shift is a result of OPIC policy or whether it is incidental. OPIC has instituted measures to limit total greenhouse gas emissions from projects that it finances, and has been the target of legislative maneuvers to suspend these limits and allow additional fossil fuel finance.2

U.S. shares of multilateral development bank finance for fossil fuels totaled $489 million in 2015, a figure carried over to 2016 due to lack of complete data for that year across these institutions. The Trump Administration recently revised Treasury guidance on U.S. engagement with the multilateral development banks, removing Obama-era restrictions on U.S. support for the most polluting types of coal projects.3 This stands in contrast to recent statements from other multilateral public finance institutions, such as the China-led Asian Infrastructure Investment Bank, whose management recently indicated that the bank will not fund coal power projects, and that there are no coal power plants currently in their project pipeline.4 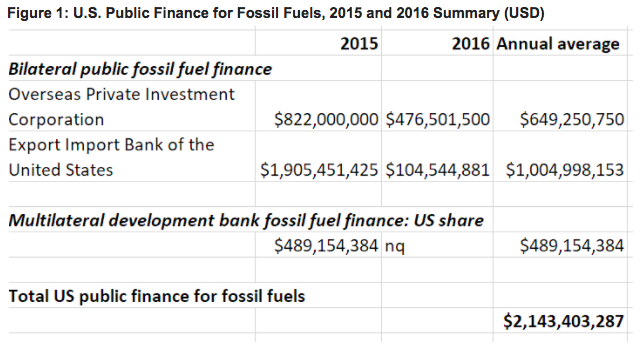