A Trump vs. the world showdown is brewing at this year’s G20 leaders’ summit, July 7 and 8 in Hamburg, Germany. After pulling the United States out of the Paris Agreement, Trump’s climate denial will likely take a beating from other G20 governments, who nearly all say they support strong climate action.

An ugly diplomatic dust-up is exactly the right response to the Trump Administration’s naked adoration of the fossil fuel industry – but to consider themselves progressive, governments must do more than just trash Trump to show true leadership on climate change. They should hit Trump’s fossil fuel cronies where it hurts – after promising way back in 2009 to phase out fossil fuel subsidies, G20 leaders should set a hard 2020 deadline for ending these dirty energy handouts. 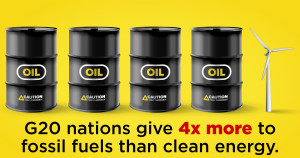 A new report we released this week with Friends of the Earth U.S., the Sierra Club, and WWF’s European Policy Office shows that G20 leaders need to put their money where their mouth is: They’re still providing $72 billion per year in government-backed finance for oil, gas, and coal production around the world through their public finance institutions. That’s nearly four times as much as they’re providing to clean energy. Of the $72 billion in annual fossil fuel finance, the vast majority supports oil and gas, which benefit from six times as much public finance as coal. Meanwhile, G20 nations give less than $19 billion in annual public finance for clean energy projects.

This new report and its recommendations are endorsed by a multitude of partners in Canada, Italy, Germany, France, South Korea, and Japan, as well as Climate Action Network Europe. Together, we are calling on G20 leaders to end all public finance for fossil fuels by no later than 2020.

This fossil fuel finance comes from public finance institutions like export credit agencies, development finance institutions, and multilateral development banks (like the World Bank). These transactions are typically, in one way or another, sweetheart deals. Public finance institutions give companies get better loan terms or cheaper loan guarantees than they’d be able to get on the open market. In certain cases, projects would never even be able to proceed without government-backed finance. In this way, governments (and taxpayers) are providing massive backing for fossil fuels, and enabling disastrous projects that otherwise could never be built.

Let’s break down the $72 billion per year in fossil fuel finance from G20 government-backed institutions. $13.5 billion supports exploration for even more oil, gas, and coal – reserves of fossil fuels that we can never burn if we want to remain within climate limits. The best available science indicates that to have a two-thirds chance of remaining below 2°C warming, 68 percent of existing reserves must remain in the ground, a number that climbs to 85 percent of reserves for a 50/50 chance of staying below 1.5°C.

Our Sky’s Limit report demonstrates that existing developed reserves of oil, gas, and coal – that is, reserves that are already producing with open mines or drill rigs actively drilling – would take us well beyond that  2°C threshold if we burned them all. Developed reserves of oil and gas alone would be enough to take us beyond 1.5°C of warming. Yet world leaders who claim to be “acting on climate” are still throwing tens of billions of dollars each year in taxpayer-backed finance into the search for yet more fossil fuel reserves. It’s madness, and it’s a horrible deal for taxpayers.

If we want to speed up the energy transition (and we desperately need to), the leaders of the world’s biggest economies can’t keep dumping taxpayer-backed money into new fossil fuel infrastructure that’s incompatible with climate science and the globally-agreed goals of the Paris Agreement. The new China-led Asian Infrastructure Investment Bank recently took a big step on this front, announcing that there were no coal projects in their investment pipeline. Executives at the bank also said it would not finance any coal plants. These are good steps, but it’s time to go further and shift all public finance away from fossil fuels, opening up more opportunities to support the burgeoning clean energy industry.

Talk is cheap. World leaders have, thankfully, maintained their rhetorical momentum behind strong climate action even in the face of Trump’s climate denial. It’s now time for them to back up that rhetoric with money, by ending all public finance and subsidies for fossil fuels by 2020 at the latest.