Across North America and beyond, a growing movement of communities, tribes, and cities is pushing banks to divest from dirty pipelines – going directly after the money that enables the construction of new fossil fuel infrastructure. Banks are increasingly feeling the heat: cities have committed to divest billions from banks behind the Dakota Access Pipeline, customers have closed over $80 million worth of accounts, and a newly launched coalition effort called Mazaska Talks is expanding the campaign to proposed tar sands pipelines. 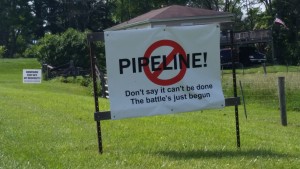 Now landowners in Virginia and West Virginia, led by the groups Protect Our Water, Heritage, Rights (POWHR) and Bold Appalachia, are opening up a new front in the push to #DefundPipelines: They’re launching a call to divest from the banks behind the proposed $3.5 billion, 301-mile Mountain Valley Pipeline for fracked gas.

The pipeline, driven by EQT Midstream Partners (EQM), threatens pristine forests and drinking water as well as farms, communities, and historic places along its route. It would also be a climate disaster, causing greenhouse gas pollution equivalent to that of 26 coal plants. 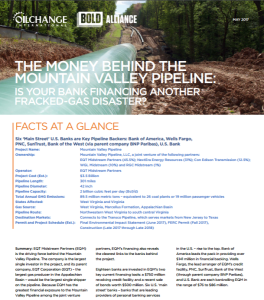 A new briefing released today by Oil Change International shows which banks are in line to be the biggest funders of the Mountain Valley Pipeline, providing a blueprint for communities seeking to divest their money.

We find that the banks providing corporate-level financing to EQM are the top bankrollers of the Mountain Valley Pipeline. EQM is the biggest investor in the project, the pipeline is the company’s largest upcoming capital expense, and EQM has said it plans to rely on its existing corporate financing, rather than project-level loans, to build the pipeline.

The following table shows that six major U.S. ‘main street’ banks rise to the top. Bank of America has the most money behind EQM, while Wells Fargo is the lead arranger of EQM’s credit facility, which means it administers the loan and makes additional revenue for doing so. PNC, SunTrust, Bank of the West (via parent company BNP Paribas), and U.S. Bank are also significant investors in EQM’s key sources of pipeline finance. 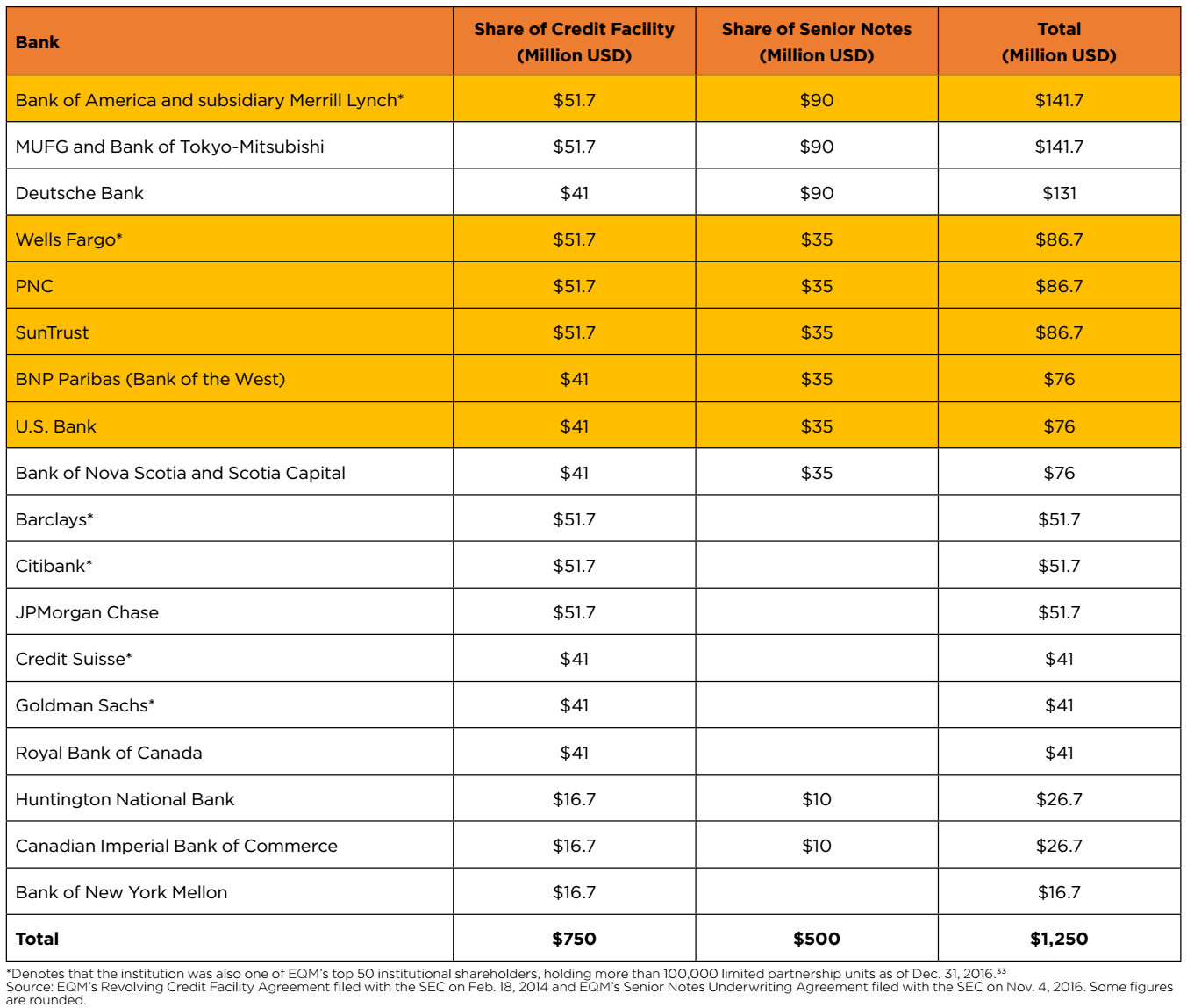 In addition to the list above, we identified two other banks with a significant footprint across Virginia that are directly bankrolling the Mountain Valley Pipeline: Union Bank & Trust and BB&T. These two banks have loaned a combined $25 million to RGC Midstream to fund its comparatively small 1 percent stake in the pipeline.

It comes as no surprise that nearly all of the banks funding EQM – a company whose express purpose is to expand and operate fracked-gas infrastructure – are also among the group of banks that fund the Dakota Access Pipeline and/or one of four proposed tar sands pipelines in North America.

In this way, the #DefundMVP effort will add power to the broader #DefundPipelines movement and vice versa.

As a case in point, U.S. Bank, one of EQM’s top funders, recently became the first big bank in the U.S. to commit to ending project-level loans for oil and gas pipelines. This welcome step forward came in response to persistent grassroots pressure. But U.S. Bank continues to provide significant corporate financing to major oil and gas companies, including EQM, that are using that money to build hundreds of miles of new pipelines. So the Mazaska Talks movement and, now the Defund MVP campaign, will keep the pressure on.

Here’s how you can stand with landowners in Virginia and West Virginia moving their money out of the Mountain Valley Pipeline, and support the global movement to #DefundPipelines:

Read the full briefing on the banks behind the Mountain Valley Pipeline at: https://priceofoil.org/2017/05/18/banks-behind-the-mountain-valley-pipeline

See the Oil Change briefing on the greenhouse gas emissions of the Mountain Valley Pipeline at: https://priceofoil.org/2017/02/15/mountain-valley-pipeline-greenhouse-gas-emissions-briefing/ 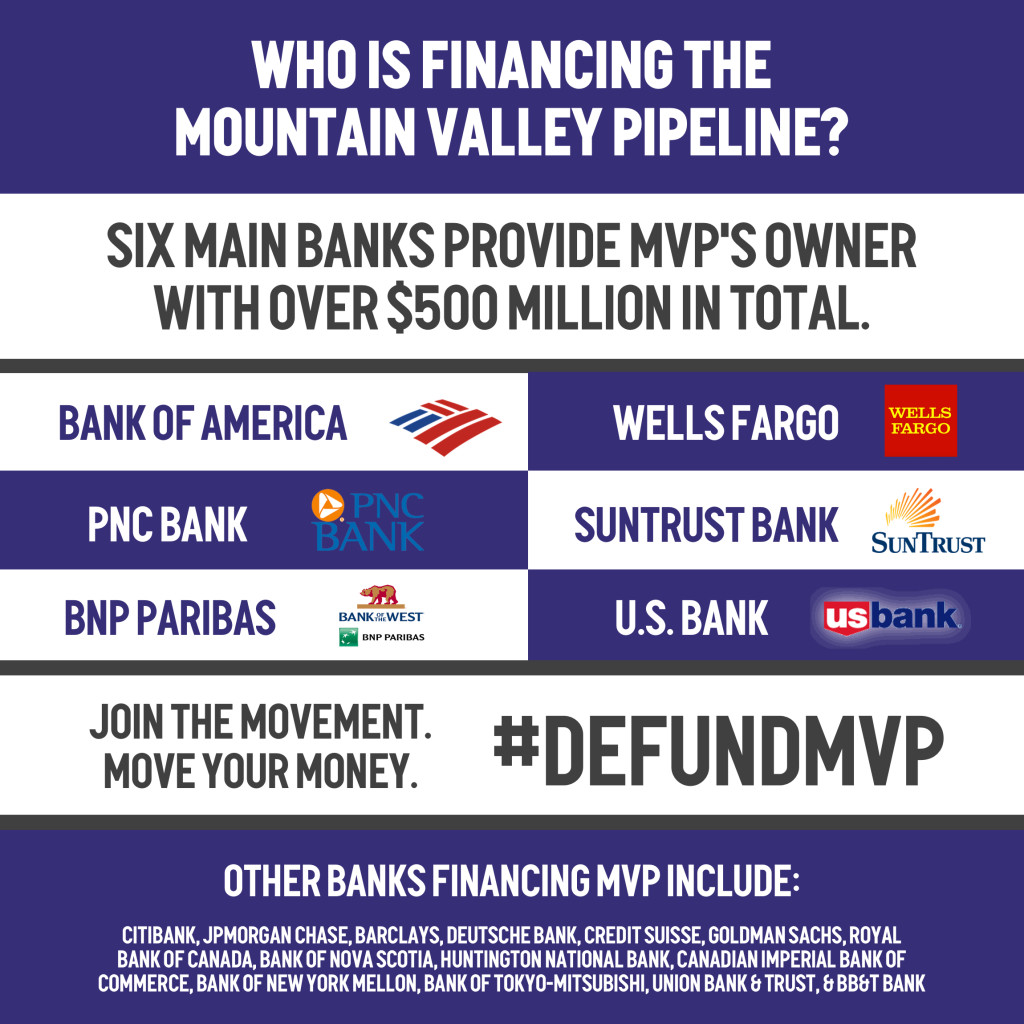