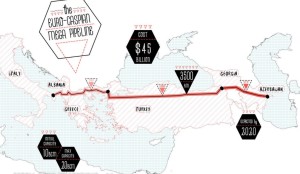 There is increasing outrage in Italy against what campaigners are calling “Europe’s DAPL”, with thousands of people taking to the streets to campaign against the 3,500 kilometre, $45 billion, Euro-Caspian Mega Pipeline (ECMP).

The vast ECMP will stretch all the way from the polluted oilfields of Azerbaijan through six countries to Italy. In so doing it will transport gas to Europe, locking the continent into decades of fossil fuel use.

But local communities in Italy are outraged at the damage being done to their local environment and are now fighting back. Footage on Facebook shows the blue helmeted Italian Police lining the pipeline route as ancient olive trees are transported off site. There is visible anger in the air as the trees, wrapped in white body bags, are driven away.

The issue is now making front page news in the country.

One of the groups campaigning against the pipeline is the London-based oil watchdog Platform. The oil watchdog has long highlighted the endemic corruption in Azerbaijan as well as the appalling human rights abuses in the country and how the two are linked to oil.

There are dozens of political prisoners – comprising  journalists, bloggers, peace activists, human rights lawyers – who have all been incarcerated for challenging the corrupt regime run by President Aliyev. The dictator has been propped up by British oil giant BP for two decades, ever since BP and the government signed what was deemed “the Contract of the Century” back in September 1994.

As well as BP’s involvement, this is also a pipeline being propped up by public money. The western part of the pipeline route, known as the Trans-Adriatic Pipeline, is due to receive €2 billion from the European Investment Bank (EIB), which according to Platform is the “largest loan by the EU bank in its 57-year history.”

Indeed, the pipeline is a key element of the Energy Union, a flagship initiative of the European Commission in Brussels. And despite concerns about climate change and the corruption of the Aliyev regime, in February this year, at a meeting in Baku in Azerbaijan the Commission’s vice president for the Energy Union, Maroš Šefcovic, encouraged international financial institutions to “bankroll” the pipeline.

The World Bank is also helping fund the project. In December 2016, via the International Bank for Reconstruction and Development, the IBRD, the Bank approved two $400 million loans for parts of the pipeline route. In total the EBRD has declared its intention to allocate a loan of up to €1.5 billion ($1.59 billion) for the pipeline, although final amounts are said yet to be finalised. The Asian Development Bank has also invested too.

Writing about the latest protests last week, Sarah Shoraka from Platform noted how it is not just in Italy that the pipeline is being opposed. “In Turkey, the pipeline crosses Kurdish regions that are currently affected by an escalation of violence following the breakdown of peace talks in July 2015. In Albania and Greece, farmers whose land is being appropriated have not been adequately consulted or compensated. At the same time, the project has been mired by corruption scandals, currently going through the legal system in Italy.”

The bigger issue is that the pipeline will lock us into fossil fuels for the next fifty years, just at a time when we should be decarbonising our economies.

Indeed as Shoraka notes: “At first glance the ECMP makes no sense at all. Gas demand in Europe is already falling and climate targets mean that this trend must continue apace.” Another group working against the pipeline, Bankwatch, goes as far as calling the pipeline a “predictable stranded asset.”

A year ago, Platform co-published an interactive documentary that follows the pipeline route from the capital of Azerbaijan to the coastline of Italy.

One of the people they spoke to was Alberto, from Puglia in Southern Italy who has found himself on the frontline against the pipeline, and who is concerned about the pipeline’s impact on tourism, fishing and agriculture, including on the local olive trees: “This concerns our future. As citizens we have to get involved, nobody will do it for us,” he told Platform.

You can watch Platform’s web documentary about the pipeline here.