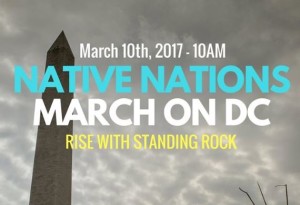 Tomorrow the Standing Rock Sioux tribe, which have been leading the protests against the Dakota Access pipeline, will take their fight to the oil-loving Trump Administration by marching on the White House.

They will be joined by other indigenous leaders and climate activists from across the globe on the “Native Nations Rise March” and then at a rally at the city’s Lafayette Square to protest against what one activist calls the “tyranny that is right now the Trump Administration.”

Tomorrow’s march is the culmination of a week of action that has seen tepees, that were until recently in North Dakota, now erected beside the Washington Monument in a symbolic resistance to Trump’s fanatical promotion of fossil fuels and as a wider promotion of tribal sovereignty and celebration of Indigenous rights.

Organized by the Native Nations Rise Planning Committee, the tepee camp is hosting cultural workshops, speaker panels and water blessings. Yesterday, on International Women’s Day, indigenous women from across the country gathered at the Tipi Camp.

Kandi Mossett of North Dakota, Indigenous Environmental Network, one of the speakers, said: “We say Mni Wiconi, water of life, water is life. Water is a human right. We can’t sit around waiting for someone else to make change. We have to do that. We want to move away from the fossil fuel economy”.

Faith Gemmil of Alaska REDOIL (Resisting Environmental Destruction on Indigenous Lands added: “They can’t just take every last drop of oil out of our territories and then say, we should shift now. We need to shift now. We need to mobilize. It’s all of our futures on the line. Climate change is the biggest issue of our time. The fight in Standing Rock is All of Us.”

Thousands upon thousands are expected to take part tomorrow on the march, which is the main event of the week. One of those marching will be the former Governor of Maryland, Martin O’Malley who earlier this week also visited the Native Nations Rise camp:

“I believe that we must call upon the wisdom of Indigenous Peoples in these times,” he said. “We need to figure out how to live in harmony with the living systems of this Earth. We need to develop our understanding and take more life-giving actions than shoving pipelines through tribal lands.”

Tomorrow the water protectors, who have spent much of the last year trying to stop the controversial Dakota Access pipeline, will call on the Trump Administration to seek tribal consent, rather than just consultation, before any future major infrastructure projects can pass close to or over their lands.

“This fight isn’t over,” Mike Gamms, told ABC News. “A lot of people thought the fight was over back in December or they think the fight is over now and it’s a lost battle but there’s still a lot of fight left and a lot more that can be done.”

The march comes as those fighting the pipeline suffered another legal setback earlier in the week. On Tuesday, a federal judge ruled against a preliminary request from the Cheyenne River Sioux Tribe and Standing Rock Sioux to block the final phase of the pipeline on religious grounds.

A full ruling is not expected until April by which time the pipeline could well be completed. “While this preliminary ruling is disappointing, it’s not surprising,” Dave Archambault, chairman of the Standing Rock Sioux Tribe, said in a statement. “It is very difficult to get an injunction in a case like this. The bigger legal battle is ahead — we stand strong,” he added.

And stand strong they do.

For more info on the march:

The Washington march will take place on Friday beginning at 10 a.m. Eastern time. It begins at the Army Corps of Engineers Headquarters, which is located at 443 G Street NW. The march goes to the White House, where it ends with a rally at 12 p.m. in Lafayette Square.