The President has staked his claim to a distasteful nationalist agenda and with it an energy policy that claims to put America first. So, building the Keystone XL tar sands pipeline must be supportive of the U.S. energy sector, or at least not destructive, right? Not so much.

Trump’s plan to bring the Keystone XL zombie pipeline back to life is wrong on so many levels. To begin with, the Canadian tar sands oil it would enable is among the dirtiest sources of crude oil in the world. Anything that encourages its production is diametrically opposed to the climate action we need to take.

Then of course there’s the threat to water, land and safety. Yet another horrifying prospect accompanying this project is the fact that landowners along the route who don’t want to bear the risk of a spill could be forced to handover their land through eminent domain not for the public good, but for corporate profits.

That the President has brushed aside climate and the concerns of communities along the route is of no surprise. Nobody was ever in any doubt about this administration’s polluting credentials. But the platform the President has used to justify the project is undermined by oil market realities, exposing the hollowness of the administration’s rhetoric.

The fact is that at the Cushing, Oklahoma oil storage hub, where the nation’s oil prices are set and where Keystone would deliver its oil to, there is already a mounting glut of supply. So, building KXL will exacerbate a supply glut and lead to lower prices for U.S. oil producers. As a giant inflator of the nationalist hot air balloon, this one’s looking a little saggy and wrinkled around the edges.

Here’s how this works.

Cushing, Oklahoma is the world’s largest oil storage hub. It currently has the capacity to store over 90 million barrels of oil, although around 20% of capacity is generally kept empty for safety and operational reasons.

The level of storage at Cushing is closely watched by oil traders as an indication of the U.S. supply and demand balance. The key U.S. oil price benchmark known as WTI is set at Cushing as it is the delivery point for contracts traded on the New York Mercantile Exchange. If storage levels at Cushing are rising, then the WTI price is likely to go down and vice versa.  There are of course other factors involved and price swings may be more or less pronounced based on external factors such as seasonal consumption patterns. For example, a building of stocks during the U.S. summer driving season would be unusual and therefore would likely cause a larger price dip than in the winter when stocks are expected to build.

There have been times when a structural imbalance has caused the WTI price to be discounted for a prolonged period. Since about 2011, when the U.S. fracking boom took off and onshore oil production grew for the first time in more than a decade, crude started to build in Cushing and the WTI price became heavily discounted to international benchmarks such as the commonly quoted Brent benchmark. While global oil prices were at historical highs, hovering around $100 per barrel for years, WTI was trading at times as much as $20 to $30 less. The chart below shows the discount between WTI and Brent rising and falling in sync with stocks of oil at Cushing. 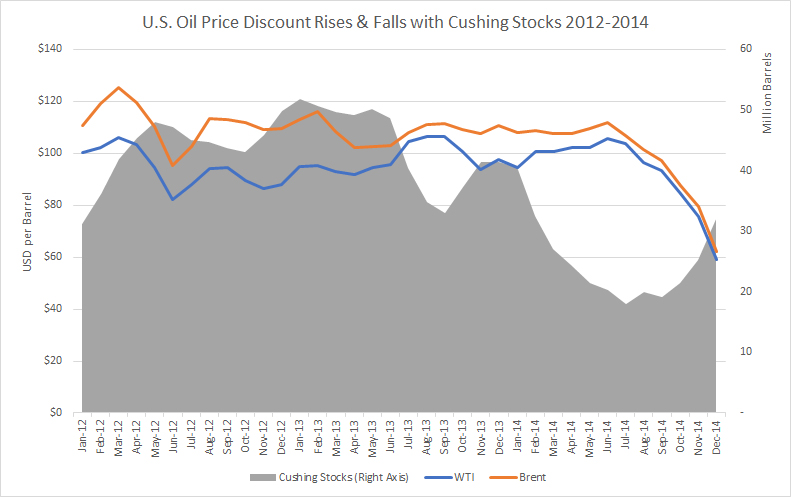 A key cause was that the direction of crude oil flows in the U.S. was reversing but infrastructure was struggling to keep pace. Growing supply in the midcontinent and north sought to reach refineries on the Gulf Coast, whereas for decades domestic and imported oil had generally flowed north from the Gulf of Mexico.  For some time, there was insufficient pipeline capacity exiting Cushing to the south and stocks of crude built up undermining the price of WTI compared to other benchmarks.

This issue has been resolved to some extent with new pipeline capacity running from Cushing to Texas. However, as more pipelines have been built into Cushing bringing new supplies from Colorado, North Dakota and elsewhere, there remains some imbalance between incoming and outgoing pipeline capacity. This is reflected in the ongoing WTI discount of between $1 and $2. 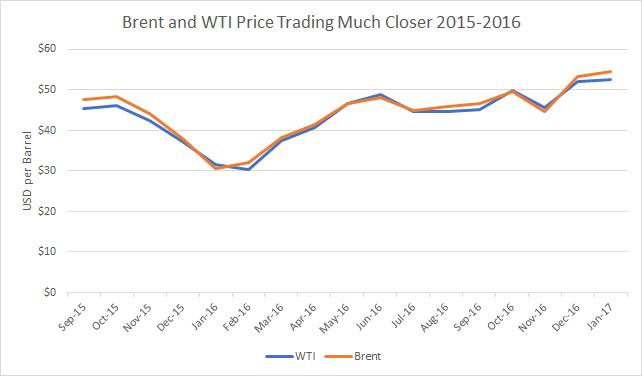 Oil analysts at Genscape calculate that there is currently an imbalance of around 850,000 bpd between inflow and outflow capacity at Cushing, although this is currently cushioned by low utilization rates. Indeed, incoming pipelines have only been operating at around 51% capacity in the first two months of 2017, while outgoing pipes were using about 67%. This has kept Cushing storage relatively stable albeit at historically high levels.

Adding the 830,000 bpd Keystone XL pipeline will dramatically increase the imbalance between incoming and outgoing capacity at Cushing. This not only clearly indicates the lack of a real need for the project, but also threatens to hit U.S. producers in the pocket by causing wider WTI discounts as crude stocks once again build up in Cushing. As most U.S. crude is priced against WTI, this could affect producers around the country.

As the transition to move away from fossil fuels to save our climate becomes more urgent, we are not about to shed tears for the profits of U.S. oil producers. But we are concerned about building oil infrastructure that is not needed. Anything that sends a signal to tar sands producers that they should increase production is taking us in the wrong direction.

And as far as building Keystone as part of the administration’s so called “America First Energy Plan”, it would appear that the project is merely further proof of Trump’s cynical manipulation of American patriotism. America has a booming clean energy sector that this administration appears determined to ignore, preferring instead to support oil and gas wherever it comes from.

Keystone XL does not put America first. It puts our land, water and climate at risk to serve a political agenda that is not in the nation’s interest. It is not necessary and should not be built.