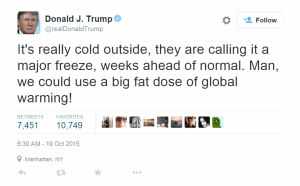 As if night follows day, it was only a matter of time before the climate deniers would try and serenade their climate denying President, Donald Trump, to kick the US out of the UN agreement on climate, long seen as their bete noir.

Even if Trump obeys them, around the world other nations will carry on acting on climate change. The science is settled and action is taking place everywhere. Even in the US, many states will carry on acting too. So the letter is a modern day equivalent of medieval marine scientists asking King Canute to hold back the tide. It is completely flawed. Donald and the deniers can scream at the rising tide, but they are still going to get their feet wet.

First lets look at their scientific credentials. The letter is organised by Richard Lindzen, who has been ploughing his climate sceptic views for decades. I remember listening to Lindzen tell OPEC in the early nineties that increased CO2 made plants grow bigger. His theory might work in the laboratory, but it has no bearing to climate reality.

Ross Gelbspan in his book, The Heat is On, reported in 1995 that Lindzen “charges oil and coal interests $2,500 a day for his consulting services; his 1991 trip to testify before a Senate committee was paid for by Western Fuels, and a speech he wrote, entitled ‘Global Warming: the Origin and Nature of Alleged Scientific Consensus,’ was underwritten by OPEC.”

Dr John Abraham, a professor of thermal sciences, takes issue with the letter in the Guardian today, in an article entitled, “Just who are these 300 ‘scientists’ telling Trump to burn the climate?” labelling the 300 scientists a “pitiful list.”

As Abraham points out: “First of all, hardly anyone on the list was a climate scientist; many were not even natural scientists. It is almost as though anyone with a college degree (and there are about 21 million enrolled in higher education programs just in the USA) was qualified to sign that letter”.

Indeed the lists even includes “Lord” Christopher Monckton, who, according to Guardian columnist, George Monbiot, is “otherwise known as Viscount Monckton of Brenchley. He has a degree in classics and a diploma in journalism and, as far as I can tell, no further qualifications.” Even Monckton’s title is a sham. Several years ago, the British House of Lords took the unprecedented step of publishing a “cease and desist” letter on its website demanding that Monckton, who used to be the UK Independence party’s head of research, to stop claiming to be a member of the Upper House of Lords.

The denial letter also includes William Happer, who is under consideration for the position of President Trump’s science advisor, and who is on the record as saying: “There’s a whole area of climate so-called science that is really more like a cult. It’s like Hare Krishna or something like that. They’re glassy-eyed and they chant. It will potentially harm the image of all science.”

Like Lindzen, Happer believes that elevated carbon dioxide levels are a good, not a bad, thing.

Writing last week, Benjamin Sanderson, a climate scientist at the National Center for Atmospheric Research in Boulder, Colorado dismissed Happer’s scientific arguments: “If he is going to champion the principles of the scientific method and rational discourse, he must be able to defend his positions in the light of the overwhelming evidence for the significant risks associated with anthropogenic climate change. And that’s a fight he can’t win.”

The deniers have been losing the climate argument for decades. As we move into Trump’s alternative facts world and they have a denier in the White House, they will keep making this argument. But no matter how many times you say the earth is flat and maybe Trump believes that it is flat too, the science tells us it is round.