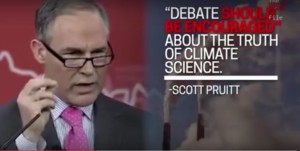 Hundreds of current and former staff at the US Environmental Protection Agency (EPA) are urging Congress to reject current Oklahoma Attorney General, Scott Pruitt, from becoming the head of the Agency.

Yesterday, some 450 former staff sent a letter to Congress to #rejectPruitt. Arguing that the signatories were “not partisan,” having served under both Democratic and Republican Presidents, the letter outlined “our concerns about Oklahoma Attorney General Scott Pruitt’s qualifications to serve as the next EPA Administrator in light of his record in Oklahoma.”

The strongly-worded letter said: “Every EPA Administrator has a fundamental obligation to act in the public’ s interest based on current law and the best available science. Mr. Pruitt’s record raises serious questions about whose interests he has served to date and whether he agrees with the longstanding tenets of U.S. environmental law”.

It continued: “Our nation has made tremendous progress in ensuring that every American has clean air to breathe, clean water to drink and uncontaminated land on which to live, work and play. Anyone who visits Beijing is reminded of what some cities in the U.S. once looked like before we went to work as a people to combat pollution. Much of EPA’s work involves preserving those gains, which should not be taken for granted.”

The former staffers warned of the dangers to drinking water from pollution and noted examples of where previous EPA heads had acted in a precautionary manner to remove lead out of petrol and act on small particulates that can damage lungs and heart.

However, the warned: “Mr. Pruitt’s record and public statements strongly suggest that he does not share the vision or agree with the underlying principles of our environmental laws. Mr. Pruitt has shown no interest in enforcing environmental laws, a critically important function for EPA.”

They outlined how whereas Pruitt had written “more than 50 press releases celebrating lawsuits to overturn EPA standards to limit mercury emissions from power plants, reduce smog levels in cities and regional haze in parks, clean up the Chesapeake Bay and control greenhouse gas emissions,” none of his press releases “refer to any action he has taken to enforce environmental laws or to actually reduce pollution”.

However they stated that “We are most concerned about Mr. Pruitt’s reluctance to accept and act on the strong scientific consensus on climate change,” and how “Pruitt persists in pointing to uncertainty about the precise extent of humanity’s contribution to the problem as a basis for resisting taking any regulatory action to help solve it.”

Pruitt’s position on climate change comes straight out of the fossil fuel industry’s playbook on climate denial, which in turn is copied from Big Tobacco’s decades long denial campaign on health: to highlight the uncertainties in the science.

Indeed, the former EPA scientists criticised Pruitt’s confirmation hearing appearing saying his responses on climate change were “a familiar dodge –emphasizing uncertainty about the precise amount of humanity’s contribution while ignoring the broad scientific consensus that human activities are largely responsible for dangerous warming of our planet and that action is urgently needed before it is too late.”

They finished the letter by arguing that “The American people have been served by EPA Administrators, Republicans and  Democrats, who have embraced their responsibility to protect public health and the environment …in the large majority of cases it was evident to us that they put the public’s welfare ahead of private interests. Scott Pruitt has not demonstrated this same commitment”.

One of the former officials to sign was Bruce Buckheit, who worked at the EPA under Clinton and George Bush, who told the Washington Post: “We retirees, we tend to like to lay low. But this has gotten a bunch of us quite concerned.”

Another ex-employee, Judith Enck, who recently left the EPA added that the choice  of Pruitt “is an unprecedented assault on environmental protection, not just on EPA as an agency, but on our country’s ability to enjoy clean air, clean water and a logical agenda on climate change.”

It is not just former EPA employees who are concerned. Yesterday, during their lunch hour, hundreds of current EPA employees protested outside the agency’s Region 5 office, headquartered in downtown Chicago.

Over 300 people attended the rally, holding banners that read: “Stop Pruitt”, “Save the EPA,” “Science is Real” and “We want clean air and clean water!”

Sherry Estes, an EPA enforcement attorney said: “It’s horrible. People are scared. People are depressed. People who were recently hired and have babies or just bought a house are scared they’ll be laid off.”

An interim copy of his Bill H.R 861 states that “The Environmental Protection Agency shall terminate on December 31, 2018.”

Gaetz’s bill has been co-sponsored by three other GOP congressmen: Rep. Barry Loudermilk of Georgia; Rep. Thomas Massie of Kentucky; and Rep. Steven Palazzo of Mississippi.