BP’s new Energy Outlook predicts ever-growing demand for oil and gas, and rising emissions that would take the world well beyond 2°C of warming. Previous Outlooks do not provide much confidence in BP’s projections. In particular, the forecast ignores the impacts of regulation on the energy system, because BP is opposed to regulation. It clearly helps BP if decision-makers believe that’s what the future holds. Is the forecasting value of BP’s Outlooks undermined by their use as advocacy tools?

Repeating Prediction of Renewables Slowing Down

Launching the outlook, BP’s chief economist Spencer Dale said “Good economists have a rear-view mirror. And they look in their rear-view mirror and they try and learn from history. That’s how most economists try and do things.” Yet when it comes to renewable energy, BP appears not to be looking in the mirror.

BP has published an Energy Outlook every year since 2011. Every year BP has predicted that renewable energy growth would slow down from an exponential to a linear phase; every year BP has been wrong. As the first graph shows, each time it has had to lift the baseline to reflect what actually happened, but then still predicted a levelling-out, and did so again this year. 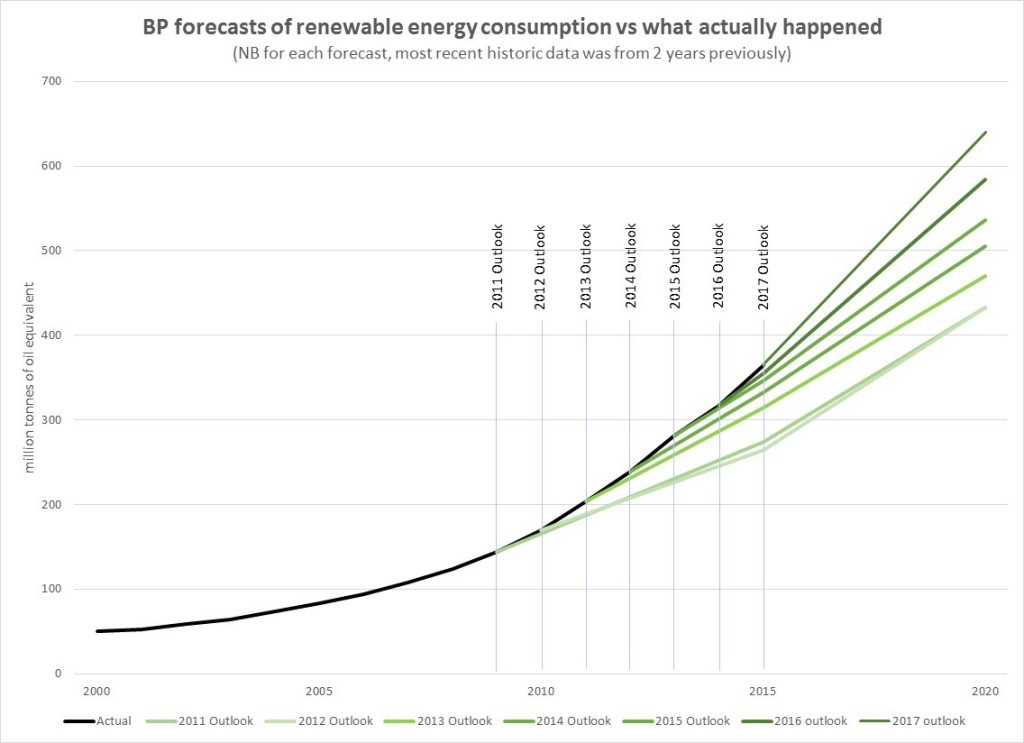 The shape of BP’s prediction can be seen in the following graph. The annual increase in renewable power generation, which to date has been climbing steeply, immediately flattens out in BP’s forecast. This means BP sees the renewable energy industry – from manufacturing to installation – pretty much ceasing to grow, as of today. 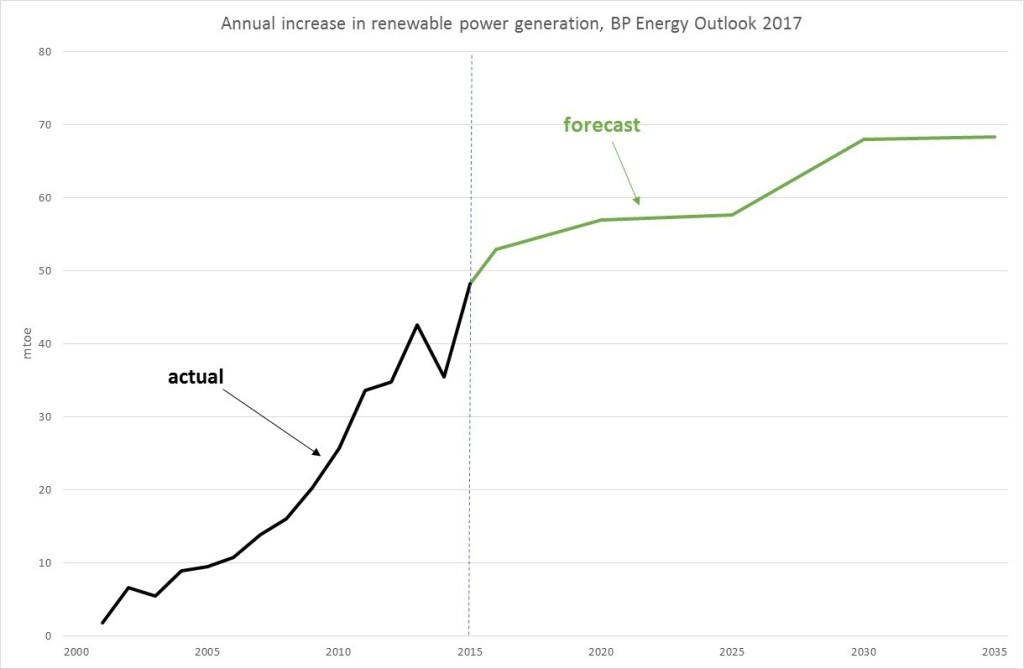 Let’s give some credit where it’s due. BP is more transparent than most other forecasters about how its forecast has been revised since the previous year. This year, predictions are revised downward for all three fossil fuels, and up for renewables. Over its 7 outlooks to date, BP has consistently had to revise renewables upward and gas downward – suggesting that action on emissions is playing out differently from how BP thought, or hoped. 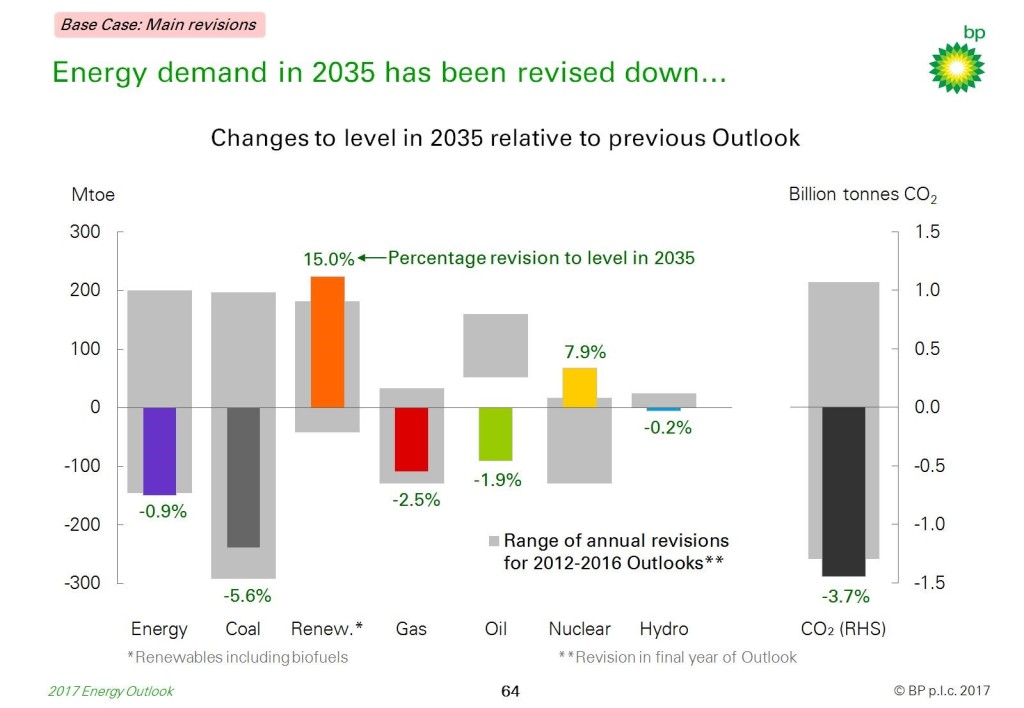 While renewables threaten BP’s gas business, what of BP’s other core product? A view is increasingly emerging that oil demand could peak within the next 10-20 years, including among Shell’s Chief Financial Officer, Wood Mackenzie and even OPEC. BP does not consider this a possibility in any of its scenarios. The key reason is that, in contrast to the other forecasters, BP does not see a significant switch to electric vehicles: it forecasts just 5% of the world’s cars being electric in 2035. 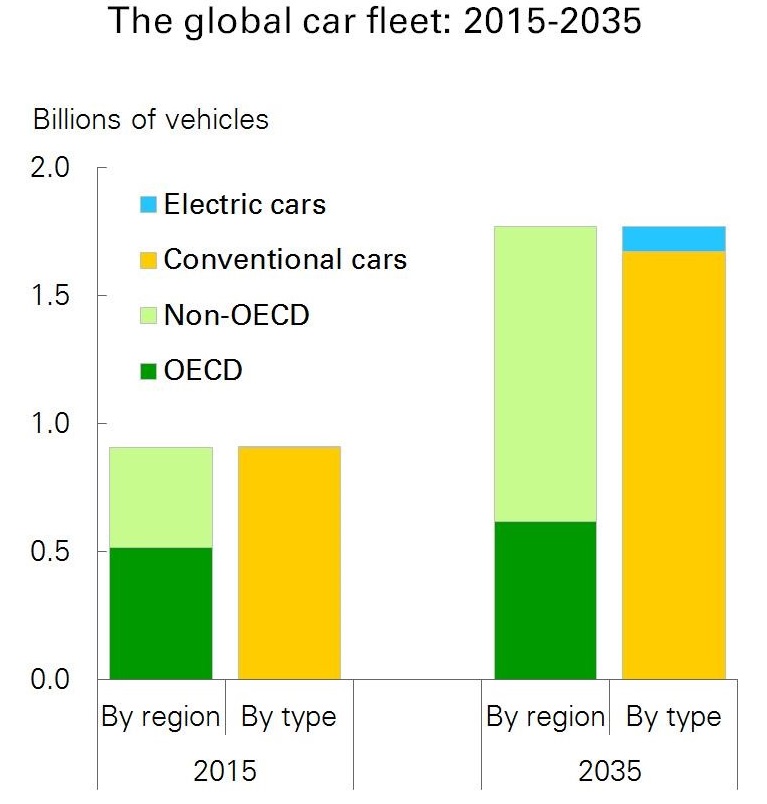 In part, this is because BP believes that as late as 2050, electric cars will still be more expensive than petrol or diesel, including vehicle cost, fuel, maintenance and carbon price. That view is not shared by anyone outside the oil industry. For example, investment bank UBS believes that by the early 2020s, the purchase price of an electric car will be only very slightly higher than a petrol car, with only a small fraction of the fuel and maintenance costs. 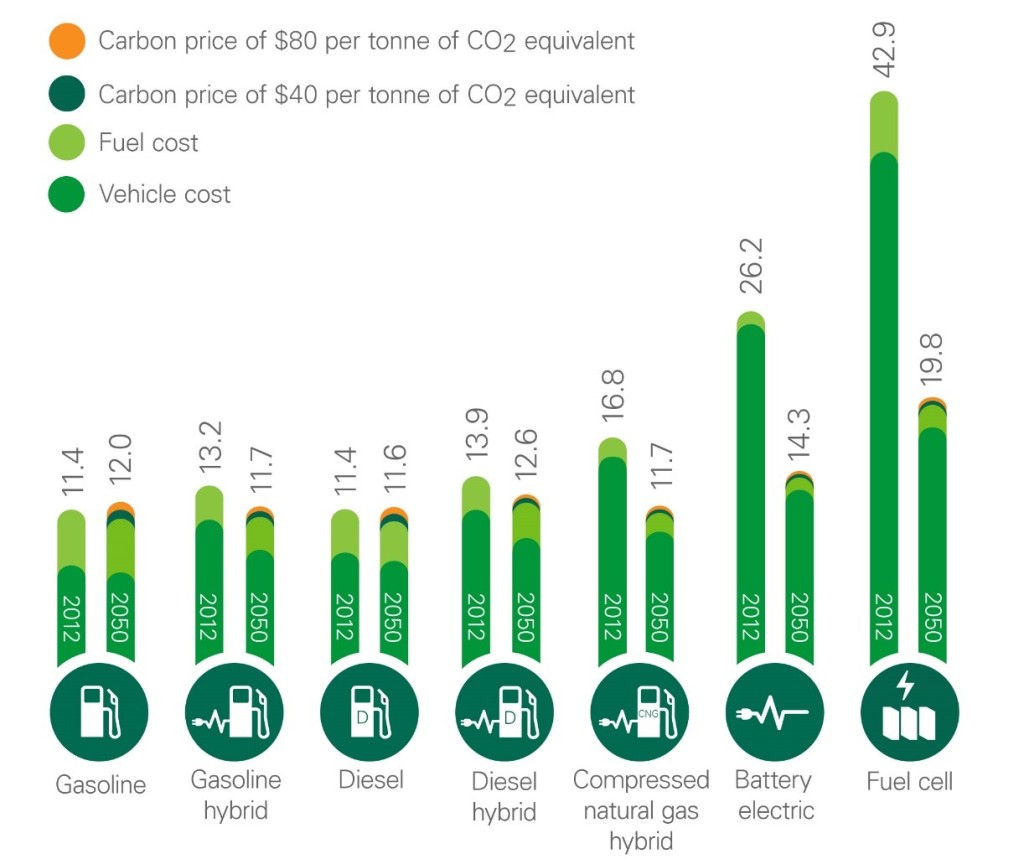 Vehicle electrification is at a much earlier stage than renewable energy, and so is more uncertain. That uncertainty is amplified by a faster turnover in existing capital stock: cars last around ten years, compared to forty for a thermal power station. As any forecaster knows, the way to deal with such uncertainties is to consider more than one possible future, and to make decisions that are robust to various possibilities. For example, a recent report by McKinsey and Bloomberg New Energy Finance considered three scenarios for electric vehicle penetration. Alongside a slower transition, two scenarios could lead to nearly 100% of car sales being electric by 2030 with faster technological development, or by 2025 if driven by regulation. 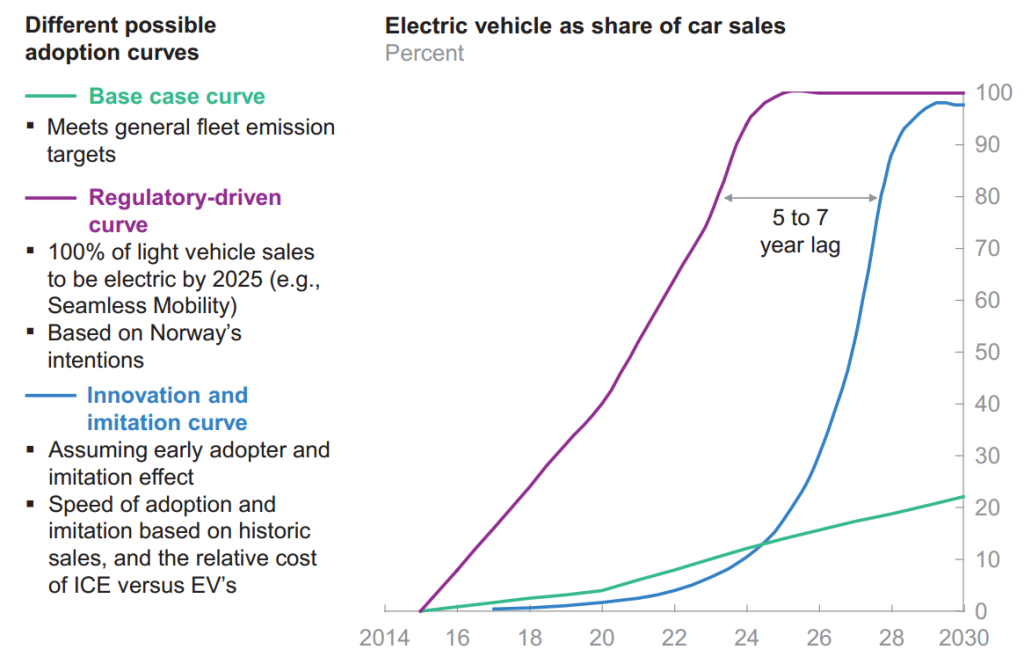 Source: BNEF & McKinsey, An integrated perspective on the future of mobility, 2016

What is most remarkable about BP’s look at electric vehicles is the narrow range of scenarios it considers. “Even very rapid growth of electric cars doesn’t seem likely to be a game changer for oil demand,” said Spencer Dale on Wednesday. But his “very rapid growth” scenarios extend only to 10% or 15% of cars – so it’s unsurprising that at those levels there’s no significant impact on oil demand.

BP’s Outlook doesn’t describe an impossible future, but it does fail to describe plausible futures that could be very difficult for its business. In other words, it is a bet on everything turning out just fine. If this Outlook is used as a basis for BP’s investment decisions, the company’s shareholders should perhaps be concerned.

BP’s outlook lists four factors that could influence the uptake of electric cars: battery costs, government subsidies, conventional engines’ competitive cost, and consumer preference. The one obvious omission from that list is regulation. Major cities from Paris to Mexico City are banning diesel cars to reduce particulate air pollution, and various governments including Germany are planning or proposing a ban on sales of petrol and diesel cars from either 2025 or 2030. If these new regulatory trends catch on and spread, they could have a major impact on the rate of electric vehicle growth, as McKinsey/BNEF’s scenario showed.

BP’s omission of regulation as a factor may not be accidental: at Wednesday’s launch Dale argued strongly against any regulation to reduce emissions. “It’s hard for any government to pick winners and losers,” said Dale, whereas “A carbon price provides incentives for businesses, markets and consumers to seek out the most efficient path as technologies and behaviours evolve.” 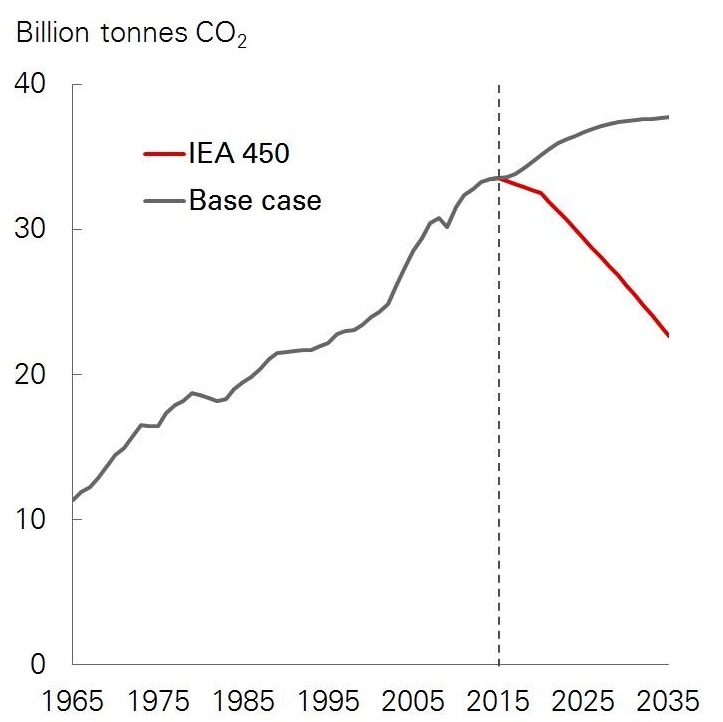 Herein lies the fundamental problem with BP’s Energy Outlook: its role is muddled between forecasting and advocacy. However much BP wants governments to refrain from regulating, no plausible forecast would ignore regulation as a key driver of change. For all BP’s efforts to portray the Outlook as an open-minded consideration of the future of energy, how much can we then trust its analysis? More broadly, in 2015 BP’s Chief Executive said of climate change, “The challenge ahead is to make the case for the necessary role of fossil fuels.” It seems that making that case – of the inevitability of fossil fuel dominance for decades ahead – may be part of the purpose of BP’s Energy Outlook.

At times BP’s argument becomes circular. In October, Dale argued that policymakers and investors could more effectively reduce emissions by focusing on improving the efficiency of petrol and diesel engines, rather than supporting electric vehicles. This conclusion was supported by BP’s forecast of low penetration of electric vehicles, which in turn is a product of lack of government support.

So in short, BP’s Energy Outlook describes a world where oil and gas demand keep growing, renewable energy growth slows down, and electric vehicles don’t go anywhere. Yes, we know that’s the future BP would prefer. But as we see from BP’s repeated revisions, where it adapts its forecasts to try and keep up with the reality of the energy transition, the future of energy is a lot more open than BP would like it to be.