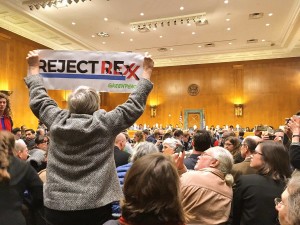 As we edge ever closer to a full-blown Trump Presidency, there is still an outside chance that oilman Rex Tillerson may not make it through the confirmation process.

Yesterday, the most high profile Republican critic of Tillerson from the Senate Foreign Relations committee, Marco Rubio, R-Fla, said that he was still undecided as to whether he will support the ex-Exxon CEO as America’s new Secretary of State.

Rubio told reporters in Miami: “We’re going to go through the transcripts of the hearing, which I’ve begun to do. We need to have a foreign policy that while always acting in the national interest of the United States is always rooted in our values as a nation.”

The Washington Examiner also reported a spokesman for Rubio as saying: “As Senator Rubio said at the hearing, secretary of state is one of the most consequential positions in the U.S. government, and he’s taking his time and doing his due diligence before making further announcements”.

It would only take Rubio to vote against Tillerson on the Senate Foreign Relations committee for the Big Oil man’s nomination to be in deep trouble.

The committee currently stands at 11 Republicans to 10 Democrats.

Worryingly for the Republicans, Rubio said last week: “I’m prepared to do what’s right. I’m not analyzing it from a partisan perspective.”

There has also been much speculation also if Rubio might seek revenge on Trump for the bruising and brutal comments the President-elect made about the Florida Senator, including attacking his height and appearance.

During Tillerson’s appearance in front of the committee, Rubio was also angered by the way Tillerson refused to condemn Putin for being a war criminal and Philippines President President Rodrigo Duterte for extra-judicial killings.

His hypocrisy was plain for all to see. Tillerson also said: “We must adhere to standards of accountability.” But for decades under Rex, Exxon failed to be accountable on human rights, the environment and climate.

Indeed, as Canada’s Globe and Mail have pointed out: “Under his leadership, Exxon has invested heavily in the oil-rich countries of Angola, Equatorial Guinea, Chad and Nigeria. In each of those countries, human-rights groups have questioned Exxon’s murky dealings with notoriously corrupt governments.”

And of course, for many the company’s biggest crime for its decades-long climate denial campaign. During the hearing Tillerson said that the science on climate was inconclusive. This statement alone should disqualify Tillerson from office.

He is not a statesman. He is an oilman.

As freelance journalist, Antonia Juhasz, author of Black Tide: The Devastating Impact of the Gulf Oil Spill as well as The Tyranny of Oil: The World’s Most Powerful Industry—and What We Must Do to Stop It told Democracy Now last week: “I would say the biggest takeaway from this hearing is that there is no separating Rex Tillerson from ExxonMobil.”

So if Rubio is concerned about human rights abuses, about honesty and accountability and climate change, he should vote against Tillerson. We need a separation of oil and state. We do not want Exxon effectively running the State Department.

We already have one of Trump’s nominations for as key job at the National Security Council standing down over a plagiarism row.

As the Independent newspaper reports this AM: Monica Crowley “was tapped to be the senior director of statregic communications at the National Security Council, but a scathing report from CNN’s KFILE found that she had allegedly plagiarised passages in her 2012 book What the (Bleep) Just Happened”

As she stands aside due to plagiarism, Tillerson should stand aside for the planet. If not, Rubio should vote against him.