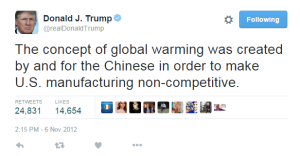 The news this week that President-elect Trump had met ex-Vice President Al Gore to discuss climate change had some of the mainstream media speculating that this might mean that the climate denying, oil-loving, conspiracy-peddling President-to-be might be changing his view on global warming.

Scientific American said the meeting could “soften his image on climate change”. The reporter from the New York Times even went as far as to suggest the meeting “offered environmental activists a glimmer of hope”.

Both of these views are dangerously misguided.

Trump himself is a climate denier. Many of his transition team, like Myron Ebell, are hard-core decades-old denialists. The President-elect is also considering two of Exxon’s long standing oil men and die-hard deniers, Lee Raymond and Rex Tillerson to be Secretary of State.

We should not be fooled by Trump’s posturing.

This is a President who will rip up decades of hard fought and painful progress on environmental and climate action. In an attempt to prevent this happening, this week more than 800 climate scientists and energy experts from 46 states signed an open letter to Trump, urging him to take six key steps to address climate change to help protect “America’s economy, national security, and public health and safety.”

The letter urges Trump “to take immediate and sustained action against human-caused climate change. We write as concerned individuals, united in recognizing that the science is unequivocal and America must respond.”

The six steps are:

All the indications are that Trump will indeed do the opposite. He will invest in fossil fuels. He will increase carbon pollution. He will carry on denying the science; undermine science in policy making and pull America out of the Paris agreement.

The news this week is that both the Arctic and Antarctic regions experienced record lows in sea ice extent last month. In the Arctic, sea ice has continued to retreat even as the temerpatures get colder.

NSIDC director Mark Serreze called it a “triple whammy – a warm ocean, a warm atmosphere, and a wind pattern all working against the ice in the Arctic.” Ted Scambos, the lead scientist at NSIDC, added: “Antarctic sea ice really went down the rabbit hole this time.” Walt Meier, a sea ice specialist with NASA also called the twin phenomenon “really stunning.”

It is unlikely that Trump will pay any attention to the science. In his rabbit-hole world climate change is a hoax invented by the Chinese.

So it is up to us to make the President elect sit up and listen. And this six-point plan is a good starting point for this urgent discussion.