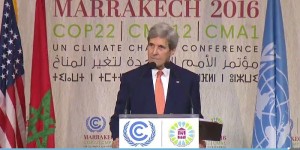 Outgoing US Secretary of State John Kerry used his speech at the UN COP climate talks in Marrakesh to lay down the gauntlet to incoming President Donald Trump on climate change.

His speech was littered with quotes that were directed at Trump: “Some issues look different when you are in office,” he warned Trump.

“It is abundantly clear we have the ability to stop the worse excesses climate change. Do we have the collective will?”, asked Kerry.

The attack on Trump was clear. “No-one has right to take decisions affecting billions of people based on ideology, without consulting experts”, said Kerry, arguing that climate change was far too important to be seen as a partisan issue.

“Climate change shouldn’t be a partisan issue in the first place,” Kerry said to widespread applause. “It is not a partisan issue for military leaders in Pentagon who see it as a threat multiplier.”

He called on Trump to do his own due diligence on the issue: “At some point even the strongest sceptic has to acknowledge that something is happening,” he said. “For those in power in all parts of world including my own, I ask you: see for yourself before making irrevocable choices”.

“None of us can afford to be oblivious to consequences of inaction,” warned Kerry.

He said those in power had to “examine the evidence and what has persuaded the Pope and presidents to act. “Get the best economists advice on the risks of inaction”, he said, before adding: “Speak with military leaders who see climate change as a security concern”.

He told Trump to go and speak to farmers, faith healers and the environmental community. “Bring in the activists and civil society” who have worked on the issue for years. “Consult with the scientists who have dedicated their lives” to working on climate change.

Another key subtext of the speech was that – whatever Trump does politically on climate change – the global and national renewable revolution will continue apace without him. “No nation will do well if it sits on the sidelines handicapping its businesses from reaping the benefits of clean tech explosion,” said Kerry.

“The clean energy market is set to be the largest market the world has ever known” the Secretary of State added: “We know today what is required. There isn’t anyone who can credibly argue otherwise. We have to continue to move to a clean energy economy.”

One commentator writing in Climate Code Red backs this up: “Trump cannot change the laws of physics, nobble Tesla, fix the woes in the global coal market, nor stop the revolution caused by the astonishing and continuing tumble in prices in the solar cell and battery storage sectors.”

Indeed, one solar boss, Sunnova CEO John Berger, adds “our industry will be fine. This industry is now so fundamentally sound that whatever goes on in the Trump administration, we will continue to grow. We got it from here.”

And if Trump does go rogue on climate, there will be trouble ahead. One Washington insider, Joe Romm warns “The US will become a pariah when Trump pulls out of the Paris Climate Agreement and the trade war he campaigned on will be all but guaranteed”.

Finally, Kerry’s message was simple: “We don’t have a second chance with climate,” he said. “Every nation has a responsibility,” including the USA.