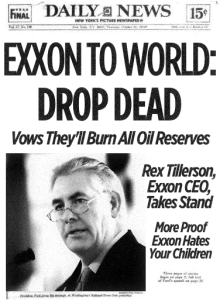 Earlier this week it was announced that we had entered a new era of “climate change reality”, with scientists warning that carbon dioxide has permanently passed the symbolic threshold of 400 ppm.

It is not expected to fall below that limit again for generations.

According to the World Meteorological Organisation, it is predicted that “2016 will be the first year” in which CO2 at the iconic Mauna Loa Observatory “remains above 400 ppm all year, and hence for many generations.”

The last time that CO2 was regularly at this level was some three to five million years ago.

It is worth stopping and pausing what you are doing and realise that this is confirmation, if you didn’t believe it already, that we have altered the climate in which our children and their grand-children will grow up.

And if you have to pick one company to blame for this new climate reality it would have to be Exxon.

These are weasle words and Exxon’s statement comes 40 years too late.

Exxon and the other oil companies “literally delayed any meaningful action by decades”, says one of the world’s best known scientists, Michael Mann. “They have knowingly stalled action on this grave threat by a cynical campaign to confuse the public on the underlying science”.

The scientists and executives from Exxon deliberately followed the tobacco industry’s tactics of sowing doubt about evidence, but this time it was over climate change not health. Exxon set out to exaggerate the uncertainty in the science and twist the facts.

To this end Exxon perpetrated one of the deceitful public relations campaigns ever undertaken by a company. It could have acted responsibily but it acted irresponsibly.

We know that tobacco kills. But people will die because Exxon followed in the footsteps of Big Tobacco.

Due to recent research, we now know that in July 1977 Exxon’s leaders were told by a senior company scientist, James F. Black about the looming climate crisis. “In the first place, there is general scientific agreement that the most likely manner in which mankind is influencing the global climate is through carbon dioxide release from the burning of fossil fuels,” he told Exxon’s Management Committee.

In the days, weeks, years and decades afterwards, the company could have acted to avert climate change. But it did not.

It deliberately chose to deny the evidence and sow doubt.

It put profits over people.

A decade later, Exxon hired a Harvard astrophysicist named Brian Flannery to examine the mathematical models behind global warming. In the late eighties, Flannery and Exxon give grants to several prestigious American universities, starting with the Massachusetts Institute of Technology. Flannery was blunt with his message for MIT researchers: “Embrace the uncertainty in all of this,” he told them.

In the nineties, as more and more scientists warned of the dangers of climate change, Exxon did the opposite.

Two decades after the company was first warned about climate change, in October 1997, the head of Exxon at the time, Lee “iron ass” Raymond, flew to Beijing to deliver a speech to the Fifteenth World Petroleum Congress in China.

As Steve Coll recalls in his book, Private Empire, Raymond, “devoted thirty-three paragraphs of his seventy-eight-paragraph speech to the argument that evidence about manmade climate change was an illusion”.

One Exxon executive, who had access to Raymond at the time recalls: “They had come to the conclusion that the whole debate around global warming was kind of a hoax. Nobody inside Exxon dared question that”.

Over the next decade, between 1998 and 2005, Exxon donated $16 million to numerous right-wing and libertarian think tanks to manufacture uncertainty about climate change.

In 2006, nearly three decades after Exxon was first warned about climate change, the British Royal Society wrote to Exxon asking the company to stop funding organisations which feature information “on their websites that misrepresented the science of climate change, by outright denial of the evidence that greenhouse gases are driving climate change, or by overstating the amount and significance of uncertainty in knowledge or by conveying a misleading impression of the potential impacts of anthropogenic climate change”.

But even then, Exxon did not stop funding the deniers.

It is a scandal that has become known as #ExxonKnew.

But still Exxon refuses to take responsibility for its actions.

Last Monday, the company requested that a federal court throw out a subpoena from New York’s Attorney General that would have forced the company to turn over decades of internal documents.

The company’s critics were not impressed. “Exxon has hired an army of lawyers to try and distract from the real story here: that they lied about their knowledge of climate change for decades,” said 350.org communications director, Jamie Henn. “Exxon’s filing leaves out the fact that they have spent millions of dollars funding misinformation campaigns, faux think tanks, and the elections of climate deniers. They’re reacting this way because they know the stakes of this investigation are enormous.”

So the company still tries to deny and delay. Meanwhile the CO2 in the atmosphere continues to rise up and up. And our children and their children will pay the price.