This week, Virginians are calling out the capture of their state by fossil fuel special interests and standing up to fight. With demonstrations and pickets in front of the State Capitol and Governor’s offices, everyday people from around the state are saying enough is enough.

And tomorrow, at the State Corporation Commission (SCC), a hearing will be held on a plan for future energy generation submitted by Virginia’s largest corporation, Dominion Power. This plan, known as the Integrated Resource Plan (IRP), is about as fine an example of Fossil Fuel Fatalism as you could hope to see.

In the IRP, Dominion proposes five possible paths it could take for meeting Virginia’s energy needs through to 2041. According to analysis from the Virginia Sierra Club, all but one of these paths result in an increase in CO2 emissions from today’s level. The other one still has emissions rising, albeit from a lower level, as we move toward mid-century (see chart below). 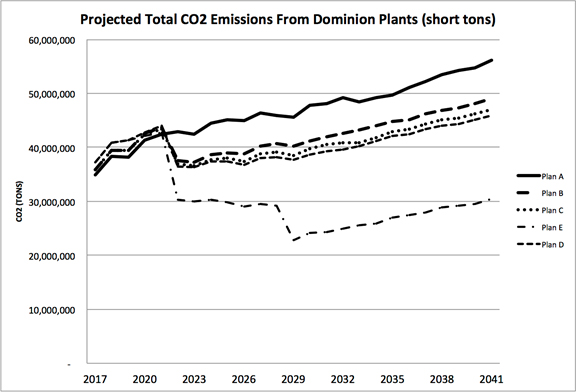 Such a set of plans not only ignores the global effort underway to prevent catastrophic levels of climate change, it also ignores the substantial progress being made in clean energy technology that would both reduce emissions and save Virginians money. With explicit intentions to maintain coal-fired generation and plans to increase gas-fired generation, Dominion is suffering from a severe case of fossil fuel fatalism.

This could not be clearer when you look at the company’s proposed solar build out in its preferred plan (Plan B in the IRP). This calls for 1,100 MW of installed solar capacity by 2030. Sounds like a lot? North Carolina installed 1,140 MW in 2015 alone.

Oil Change International, together with the Virginia Sierra Club and Mom’s Clean Air Force will attend the hearing tomorrow and submit public testimony against Dominion’s IRP and the fatalism it represents. Oil Change International’s testimony will be based on reports we have published this year on meeting the Paris climate goals and the false promise of natural gas in meeting those goals.

This week we have seen India and the European Parliament ratify the Paris Agreement on climate change. The U.S. and China have already completed ratification. With these commitments, the Agreement will now come into force next month. This can only mean one thing for any company planning the future of its greenhouse gas emissions, they must plan for a dramatic decrease.

To meet the Paris goals, emissions will need to decline by 50% before the end of the 2030s and hit zero between 2050 and 2070.  A plan to raise or maintain emissions levels simply does not fit within this global goal. If Virginia were to pursue this path, it would be out of step with the entire planet.

As our recent report, the Sky’s Limit, clearly detailed, continuing to invest in new fossil fuel infrastructure can only logically result in two outcomes. The first, climate chaos, has already clearly been ruled out by the U.S. and the majority of global governments. So continuing to build infrastructure that increases emissions has only one other logical outcome, stranded assets. The logic tree below, copied from the Sky’s Limit report, clearly outlines the choices.

In the case of the proposed IRP, Virginia ratepayers, whose rates are set by the SCC according to the approval of plans such as Dominion’s IRP, would be on the hook for assets that would have to be retired long before the investment cycle is complete. The more prudent option is to plan now for a managed decline of fossil fuel production and consumption. This would be better for workers, investors, communities, ratepayers and the planet.

As Dominion’s proposals clearly show, an increasing reliance on natural gas does not lead to long term reductions in emissions. In all of the company’s proposals, emissions increase after an initial decline. Our July 2016 report, A Bridge Too Far, used the latest EIA projections for U.S. gas use (AEO 2016), and found that the projected rise in gas use will, before 2040, leave us with no room for emissions from other sources. Gas use alone will overshoot the US carbon budget before 2040, even if we stop burning all oil and coal by that time.

It is clear today that zero carbon energy is the least cost option for future energy generation. Bloomberg New Energy Finance (BNEF) estimates that by 2027, it will be as cheap to build a new wind or solar plant as to run an existing coal or gas plant. It couldn’t be clearer that gas plant built today will only be at a cost advantage for barely a decade.  A bad investment for our planet, Dominion, and Virginia ratepayers.

The IRP, as it currently stands, would expose Virginia ratepayers to an excessive risk of paying for the cost of infrastructure that cannot be utilized for the full duration of its economic lifespan. This is because the IRP maintains a high level of dependence on fossil fuel generation that simply cannot transpire if climate goals are to be met.

In a world where emissions must be wound down to zero by mid-century or shortly thereafter, the implementation of a plan that will either maintain emissions levels or increase emissions over that period is irrefutably in conflict with the global and national imperative of climate action.

Such a conflict can only result in severe consequences for ratepayers as utilities are forced to retire plant early and invest in energy infrastructure that delivers energy with the emissions reductions required by climate science. The solution is clearly to invest today in zero carbon energy supply and demand reduction, and avoid the wasted investment that the current IRP implies.

We will take this message to Virginia’s SCC tomorrow. It’s not clear they will listen as Dominion, all powerful in the State of Virginia, notoriously regulates those supposed to be regulating it.

However, with the building momentum of people power, protesting fracked gas pipelines, compressor stations, coal ash dumping and the company’s clear fossil fuel fatalism, perhaps one day the power of Dominion over Virginia’s energy future will one day be broken.